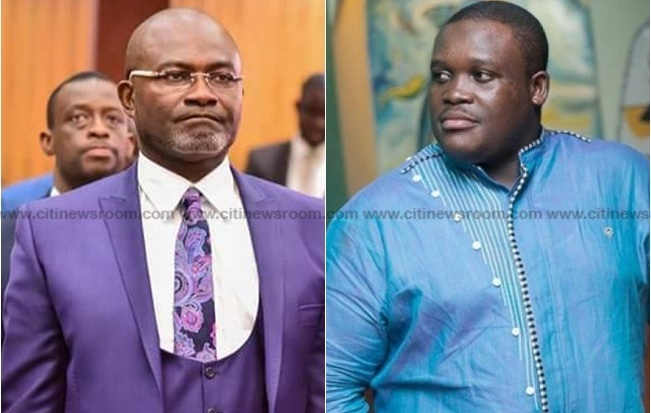 Chairman of Parliament’s Communications Committee, Kennedy Agyapong, has apologized to Sam George Nartey, Member of Parliament for Ningo Prampram, after a heated argument between the two earlier today, Thursday, September 27, 2018.

There was drama at one of the conference rooms of the Job 600, when the Chairman, Kennedy Agyapong, and a member of the Committee, Sam George, nearly traded blows in a meeting to discuss the controversy surrounding the Digital Terrestrial Television (DTT) project.

[contextly_sidebar id=”3hdgQwIeltoMa0v2W3QgRJL4wd5QJivQ”]This was at a meeting with representatives from the Ghana Independent Broadcasters Association (GIBA), and the Communication Committee in a bid to address concerns over the DTT project.

Speaking to the media, Mr. Agyapong said he got infuriated when he realized that Sam George had openly spoken about certain issues even before the Committee’s sitting today.

He later described the meeting as fruitful and indicated that all issues with his colleague Sam George had been resolved, as he made a joke out of the incident.

“I wasn’t happy with what he said at the IMANI program yesterday [Wednesday]. I was furious because of the statement he made against the committee which we have taken a decision will not end here. I have apologized to him, and he has also apologized to me. And after we came back from the chamber, we have had a fruitful discussion.”

Mr. Agyapong jokingly said he had a black belt in Taekwondo, and that he could beat Mr. George in a fight. The Ningo-Prampram MP also replied jokingly that being the son of a fisherman, he was strong enough to cause a stir.

But Sam George alleged that the Communication’s Minister, Ursula Owusu, had spoken ill of the committee, hence he had to clear the air to bring matters to rest.

“I explained to him that, somebody cast aspersions on the entire committee which I had to clear the air. So anybody who says that there was a physical confrontation [is mistaken]. The committee is committed to doing our job. There is fantastic relationship. It’s simply because we are just passionate about the digital space in Ghana. I respect my Chairman” he said.

“My members will say I have a slip lip, but all these are happening because of the Minister; so we have to meet the minister. We will invite the Minister to come and brief us on what happened.

Kennedy Agyepong indicated that the Communication Minister must come clean on the deal.

The government has postponed migration to digital broadcasting for more than three times. It however contracted StarTimes in 2012 to supply and install the digital terrestrial television (DTT) infrastructure for Ghana.

The infrastructure was to guarantee multiple TV channels, clearer pictures, better sound quality and offer more opportunities for advertisers and broadcasters. The project which cost $95 million was supposed to have been completed before 2015.

Meanwhile, GIBA is accusing government of trying to handover the DTT infrastructure to StarTimes to manage; a claim government has refuted. They’re also unhappy with government for granting StarTimes a waiver as part of the company’s decision to extend free digital TV experience to 300 villages in the country.

The waiver covers the import duty and taxes they would have paid on the specific equipment being used for the project.

The Minister of Communication, Ursula Owusu-Ekuful, later took a dig at the GIBA for supposedly misinforming the public.

She however said she has pardoned members of GIBA for the supposed error.

“There was a bit of confusion on their minds on what we were doing, and so I will pardon them and I hope that the clarification that has come will set their minds at ease. I think there was a bit of dis-ingenuity in the GIBA statement and the impression that they were creating that we were handing over the platform to StarTimes to manage when they knew that, that was not the case.”

She also assured that tax waivers await local companies that are also able to take up significant initiatives like the ‘300 villages satellite TV project’, being undertaken by StarTimes.