It has been an exciting time for Ghanaian cinema, and the much-anticipated film “Lucky” has been an absolute climax. After its release earlier this month, more and more Ghanaians have caught Lucky fever!

Imagine a “Murphy’s Law” ridden day, where everything that could possibly go wrong does, that is a day in the life of Lucky Barima Mensah.  Played by first-time actor Kumi Obuoabisa, unlucky Lucky manages to land the date of the century with the most popular social media glamour girl Nuttifafa (Jane Efya Awindor).

Without a cedi to his name Lucky and his friend Wadada (Solomon Fixon-Owoo Jr.) have to make some money by selling a laptop, or back out of the date. 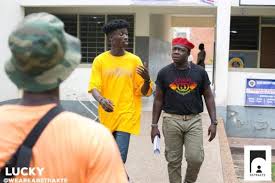 In a true tragicomedy, the duo is faced with a series of unfortunate events including run-ins with gangsters, fraudsters and a crazy taxi driver who won’t quit. Lucky and Wadada do find ways to manoeuvre their drawbacks often leaving the audience in fits of laughter.

The film is extremely relatable to Ghanaians, with various shots at popular places like the University of Ghana and relatable scenarios throughout the film.

Scenes shot in public transport on bumpy roads especially give the film an authentic feel. The use of flash-forwards adds hints of suspense to this already exciting story. 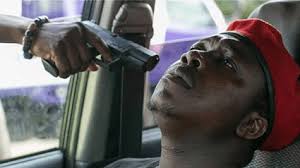 Lucky isn’t simply entertaining, but also thought provoking. Its ability to subtly brush on controversial subjects like Africanism, feminism, masculinism, sexuality, and religion, allows its audience to raise questions about Ghanaian society and culture we often brush under the carpet.

The depiction of Pamela’s type of feminism has also ruffled a few feathers but, we’ll leave you to be the judge! The film pays special attention to a new wave of the Ghanaian music with songs from DarkoVibes, Kwesi Arthur and others.

There is a good balance of the old and new actors in Lucky. First-time actor Kumi Obuoabisa does a good job, but Solomon Fixon-Owoo Jnr. and Nenesenor Abloso (who plays MasterCard) leave a lasting impression on audiences. 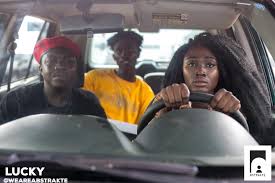 The first of Abstrakte Productions feature-length films has been extraordinary especially with their attention to marketing, but this is not a first-time success. Director Fofo Gavua, Producer Lawrence Adjei and the team have already made their mark in the music industry directing videos for the likes of Efya, DarkoVibes and Worlasi.

Luckily for us “Lucky” is still showing in cinemas, check local listings to be part of the experience.

Check out the trailer below: https://youtu.be/5gBxZcVve80