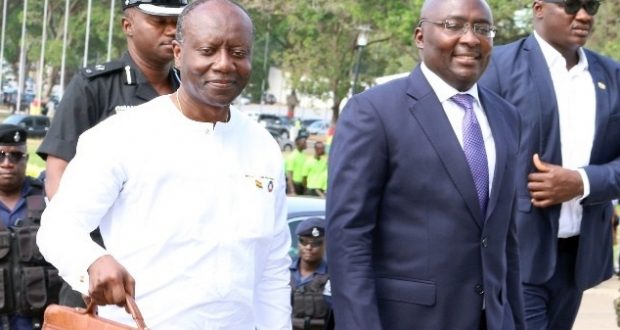 Ghana’s credit rating has been raised from B- to B category by the international rating agency, Standard & Poor’s.

“Ghana’s improving banking sector stability and lower inflation supports our view that the effectiveness and transmission mechanism of its monetary policy have improved. We are therefore raising our long-term ratings on Ghana to ‘B’ from ‘B-‘. We are affirming the short-term foreign and local currency sovereign credit ratings at ‘B’. The outlook is stable,” S&P said in its recent report released on September 14, 2018.

S&P said its upgrade of Ghana’s rating reflects their assessment that “Ghana’s monetary policy effectiveness has improved, albeit from a low base, and will support the credibility of the inflation-targeting framework over the period.”

It also cited the Central Bank’s recapitalization of banks in Ghana will go a long way in strengthening the economy.

“In our view, the Bank of Ghana’s (BoG) policy rate has also been fairly effectively transmitted through the financial system to market participants. The government’s recapitalization of the banking system in 2018 is a fiscal expense weighing on our fiscal assessment, but should ultimately strengthen the banks and allow them to support financial intermediation in the economy,” S&P added.

This comes on the back of concerns raised by the Minority over the Ghanaian economy which they claimed had not performed any better.

Ghana’s currency is struggling to be at par with major trading currencies especially the US dollar.

Some economists, members of the opposition National Democratic Congress (NDC) and many Ghanaians, have criticized the government for failing to fix the cedi’s fall, and also deal with its general impact on the larger economy.

But the Vice President, Dr. Mahamudu Bawumia, who is also the head of government’s economic management team said the economy has performed well.

Dr. Bawumia largely blamed the cedi’s depreciation on the strength of the US dollar, saying other currencies like the pounds were also struggling against the US dollar.

The Minority Spokesperson on Finance, Cassiel Ato Forson, subsequently criticized the Vice President, Mahamudu Bawumia over the current state of the Ghanaian economy urging him to apologize for the inability of the NPP to revive the economy.