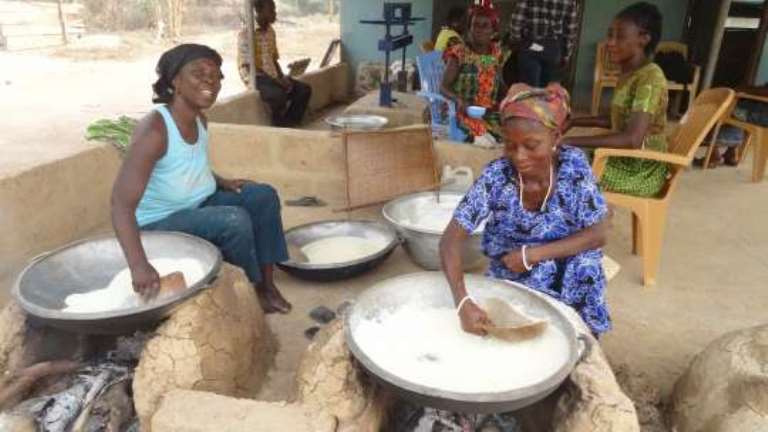 A Zambian trade delegation is in Ghana to learn about the gari processing sector and the entire cassava value-chain production to replicate it in their country.

Learning about gari processing from Ghana would also enable the Zambian government to introduce the gari as part of the menu for children of the School Feeding Programme in that country.

Mr Charles Mulombwa, Value Chain Development Specialist of the Citizens Economic Empowerment Commission in Zambia who was part of the seven-member delegation on a 10-day trade mission in Ghana, disclosed this to the GNA on the side-line of a visit to the Food Research Institute (FRI) of the Council for Scientific and Industrial Research (CSIR) in Accra.

[contextly_sidebar id=”YLRpfNoPzA9QZV8GwiJau3E0h446ghBQ”]He said the Zambian Government was piloting gari processing among 500 women-groups in Zambia and will later scale up production to all the country.

Gari is a cassava root, dried and grounded into flour and used to prepare meals that serve as a cheaper carbohydrate source for most people in Sub-Sahara Africa.

It is a creamy-white granular flour with slightly fermented flavour and sour slightly taste made from fermented, gelatinized fresh cassava tubers that are washed, peeled, mashed, fermented and fried to produce the coarse-grained product.

Ms Kayula Siame, Permanent Secretary of the Ministry of Commerce, Trade and Industry, Republic of Zambia, who is leading the Zambian delegation, paid a working visit to the FRI to interact with the scientists and learn how the Institute was helping to develop Ghana’s cassava production sector.

Ms. Siame described the visit to Ghana as very important to her country, offering the delegation, the opportunity to interact and learn better experiences in Ghana’s industrialization processes.

She said the trade delegation programme, fall within a project being run under Zambia’s Ministry of Commerce, Trade and Industry, which was hosting a skill development and entrepreneurship project under its Citizens Empowerment Commission for the women and the youth in Zambia.

“This project has in it, a very key aspect which relates to the commercialization of cassava as well as supporting SMEs and developing the industry.

“So we are here in Ghana to learn some of the lessons that we can get from the country regarding how you have commercialized cassava, how you have supported SMEs, and how it has helped the country in contributing to food security,” Ms. Siame said.

She explained that the delegation was visiting some institutions, agencies and government Ministries that were in one way, or the other, linked with the commercialization of the cassava value chain.

She said her team would be happy to learn from the research institutions like the FRI and to learn about cassava industrialization and other supporting tools that were required to make cassava a commercial crop in Zambia.

Professor Mrs. Mary Obodai, Director of Food Research Institute, commended the delegation for coming down to Ghana to learn about the way science was being used to promote cassava production that had become the staple food for more than 200 million people in Africa.

She said Ghana was fortunate to have a long science tradition, which was best represented by the history of CSIR and its 13 institutes that continued to contribute to the scientific and technological advancement of the nation and beyond.

She expressed FRI’s readiness to assist Zambia to improve on their cassava stock and commercialize it as well.

Neighbouring Nigeria is ranked first on the global ladder, producing about 60 million tonnes of cassava yearly.

He said cassava was a significant crop in Sub-Sahara Africa and that every home in Ghana consumes cassava at least once every week.

He said Ghana through some national programmes, has developed most of its cassava as sweet varieties that were cultivated for domestic uses, including fufu, banku, gari, ampesi (cooked cassava) and kokonte; as well as other yields that were grown for commercial purposes.

He said FRI through the support of some universities and other sister research institutes, was able to develop technologies for processing cassava into industrial products, and have encouraged industries in Ghana to take up the technologies like high-quality cassava flour, that were used to do pastry products, and for the brewery industry, and in the plywood industry.

He urged the delegation to take the opportunity of the knowledge available in Ghana, and get their people trained so they could improve on the cassava value-chain in Zambia, as being done in Ghana.

Okyeame Kwame launches ‘Made in Ghana’ song in Cape Coast