The Greater Accra Regional Police command has arrested some residents of Ablekuma Manhean who staged a demonstration on Monday over the poor state of their road.

[contextly_sidebar id=”yoJIWSKKs2rpJJCmDJW7qnmWzpdaM7k1″]The residents blocked the roads and burnt car tyres in the middle of the road, making human and vehicular movement to and from the area impossible.

They also stopped personnel of the Ghana National Fire Service from dousing the fire from the burning tyres.

According to the Accra Regional Police Commander, DCOP Patrick Adusei Sarpong, the residents had no permission to stage the demonstration.

While confirming that some of the demonstrators have been arrested, he said the police will work to arrest others who participated in it.

“Anybody who is part of the demonstration, this thing they have done, because they have no permission to do it, [they] have fallen foul of the public order act and therefore whoever took part in it, whether unidentified must be arrested. Some people have been arrested. We have taken them to the station, we’ll take statements from them and see what to do next, he said.

The residents have however vowed to continue with the protests to register their displeasure especially as the situation has persisted for over a decade with several unfulfilled promises from the government.

Not the first time

This is not the first time residents are staging such a protest.

In May 2017, hundreds of residents in the municipality were left stranded as the Ablekuma-Manhean-Afuaman and Oduman-Nsakina roads were blocked by angry residents and drivers. 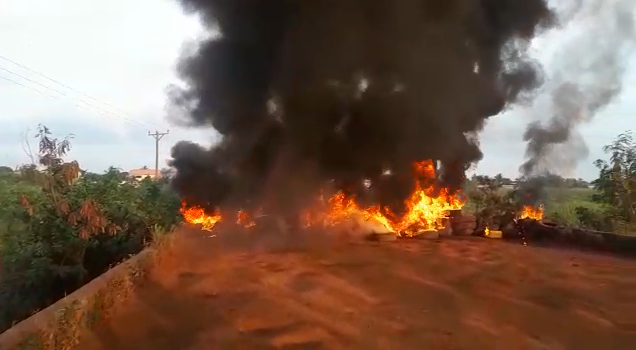 The protest saw commercial drivers park their vehicles and refused to pick passengers.

Four years ago they took part in a massive demonstration which lasted for about 12 hours over the same issue.

Roads are being done

Meanwhile, the Municipal Chief Executive of the Ghana West Municipality, Clement Wilkinson, in an interview with Citi News said the road has been awarded on contract to a contractor who has started work.

He said the pace of the project had slowed due to the onset of the rainy season.

For the past 2 weeks, we have been doing something on the road, but we are starting from somewhere. Where they [the demonstrators] are now, we will get there soon… It is a Government of Ghana project, they have prepared their certificate and I’m sure it won’t be long they [contractors] will be paid. By the end of 2019, they would have to finish,” Clement Wilkinson said.