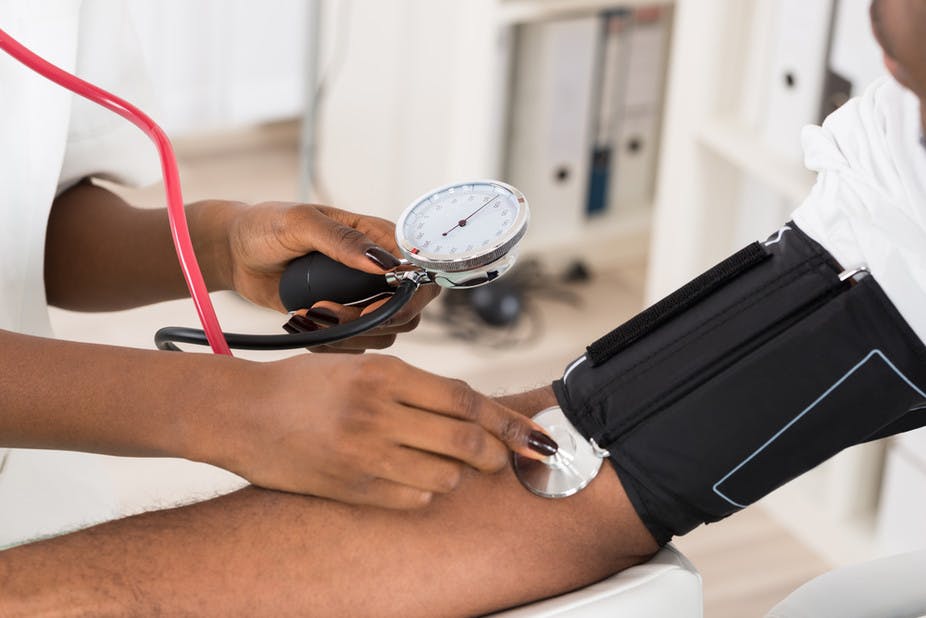 Many may be unaware but Ghana has been steadily losing ground in the incursion by non-communicable diseases (NCDs).

Listening to the organic foodstuff entrepreneur convey cynicism of the average urban diet or the tracksuit-wearing 60-year-old man who works the treadmill every morning, one would think a number of us are on our toes. But NCDs seem to have found a firm foothold in Ghana.

The numbers paint a picture of a nation that slumbered into an ambush from NCDs, or lifestyle diseases, as they are also known.

Without being alarmist, Ghana’s NCD Control Programme Officer, Dr. Efua Commey, noted that “generally, the [NCD] numbers are quite high.”

“It is even projected that chronic diseases will overtake the infectious diseases and we are seeing that trend clearly,” she said.

The idea of a double disease burden in developing to poor countries almost feels like a platitude in 2018. Poverty and NCDs — the four main ones being cancer, heart disease, chronic respiratory disease and diabetes — have been established as the best of friends.

The data shows that the major causes of death in Ghana have shifted from predominantly infectious diseases to a combination of communicable and chronic diseases over the last few decades.

In 2016 for example, cerebrovascular accidents (strokes) led in the causes of death for admitted patients, according to the Ghana Health Service. Cardiac failure, hypertension and diabetes were also in the top 10.

Thanks to better medication and immunisation, the likes of malaria, cholera and the fabled six childhood killer disease brood no longer loom large as the sole health-related bogeymen for the average Ghanaian.

Hypertension, stroke, diabetes and cancers have become top 10 causes of death in Ghana and on the bigger health canvas, NCDs are projected to become the commonest cause of death in sub-Saharan Africa by the year 2030.

The World Health Organisation’s (WHO) stark figures show NCDs were responsible for 101,000 deaths in 2017, constituting 44 percent of deaths in Ghana.

This is way up from 2012, where WHO estimated that NCDs accounted for an estimated 34 percent deaths and 31 percent of the disease burden in Ghana.

Amid all this NCD action, hypertension, which is a major risk factor for heart attacks and strokes, reigns supreme.

“For hypertension, in terms of numbers, I would say that per the data we have, it is leading… in 2017 for instance, we reported more than 600,000 people reporting with hypertension to either clinics, hospitals or health centres,” Dr. Commey disclosed. 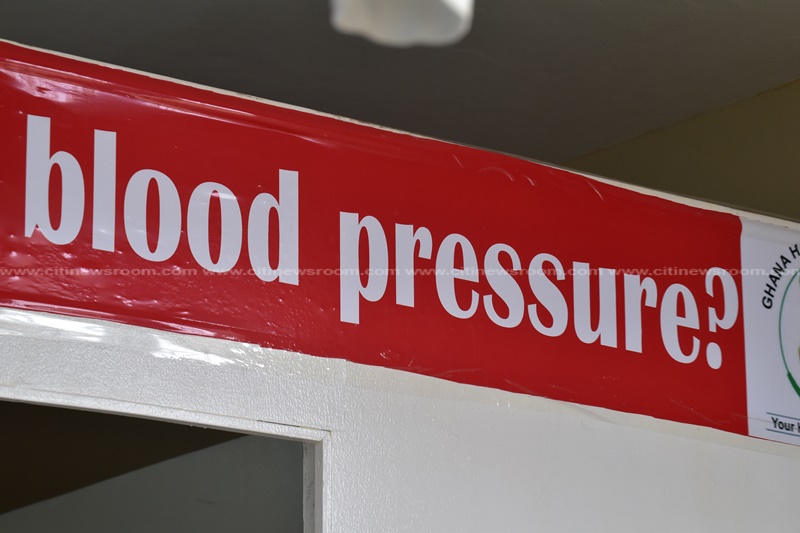 The 2011 national policy on NCDs indicated that the prevalence of adult hypertension in Ghana was increasing in ranges from 19 percent to 48 percent.

Whilst the better-off may be able to better contend with the high costs of battling NCDs, citizens living within the firm grasp of poverty begin a sometimes futile duel with death when stricken with certain NCDs.

What used to hound the wealthy didn’t know what it was missing until it had a bite of the poor 30-year-old living hand to mouth; one who can’t gather enough coins for a checkup, much less chemotherapy.

NCDs have never been more comfortable than among the hustle of dearth. It sparks a harrowing cycle that worsens poverty, which in turn is firmly rooted among the contributors to the rising rates of NCDs.

The World Poverty Clock hasn’t given us much of a breather. It tells us more than 2.8 million Ghanaians, representing about 10 percent of the population, are living in extreme poverty; they spend $1.9 a day.

We can look back to turn of the millennium as the period we stepped in the NCD snare. In 2000, world leaders drafting the millennium development goals (MDGs) were apparently too engrossed in the slew of challenges befalling the third world they forgot about NCDs. For countries that rely on a lot of donor support, this meant not much attention and even less funding.

The effects of this are still seen today in Ghana as Dr. Commey observes.

“…when it comes along funding lines, there is more funding allocated to the infectious diseases because they are more dramatic. It takes a real short time for people to come out with the diseases and the outcomes are really poor. But for chronic diseases, sometimes it takes decades.”

There has been some change for the better as SDG targets found under Goal three (good health and well-being) are placing an emphasis on combating NCDs.

On a basic level, NCDs are by-products of urbanization, changing lifestyles that manifest from poor diets and weak health systems. A place like Accra, with all the stress, traffic, overcrowding and pollution, is the perfect breeding grounds.

I don’t know whether we needed this realisation but one of the urban dwellers I spent time with was keen to point out that juju was not a contributor to the growing NCD rate.

“Nowadays, it [NCDs] are very common and people divert it saying it is witchcraft which is destroying us. But is rather it is our food and the stress that is bringing those problems.”

On one’s daily grind, there is limited access to a variety of healthy foods and some Ghanaians even sneer at the fruits we are encouraged so heartily to consume as part of a healthy lifestyle.

“The chemicals, are too much. Everything we plant now; chemicals. Right now if you buy pineapples, chemicals. For watermelon, if you put it down, within some seconds it will turn to water,” a man lamented to me.

At least exercise seems like a sure bet even though I cannot vouch for the well-being of one’s lungs after a jog by our dusty feeder roads.

Another platitude comes out when dealing with lifestyle diseases: prevention is better than cure.

Providing further insight was Nikki Boah-Amponsah, a health therapist who has consulted on diets for about 10 years.

In her experience, her advice almost always comes too late for clients. She is on the wrong side of the prevention barrier and mostly engages children and adults, who are already obese or suffering from a lifestyle disease, after doctors’ referrals.

A lot of her work involves drawing up diet and exercise plans, and she says the modern urban Ghanaian doesn’t eat a balanced diet, a far cry from the countryside.

Simply put, “we are doing all the wrong things” diet-wise, Nikki said.

“Those who live in the villages and the small towns, their lifestyle and their eating habits are perfect because they try not to eat over processed foods and all that. It’s more natural.”

Her remedies revolve around sleep, diet and exercise. Salt, carbs, oil and cholesterol are normally the components to be jettisoned in a bid for a healthier lifestyle.

Why does it take so long for people to start thinking about better lifestyles? “Most people, they need to be scared first,” Nikki remarked.

“Immediately they go to the hospital and they say if you don’t stop doing this, you are going to die then they will find the time.”

It’s not too late turn the tide though. Sowing seeds for a healthier lifestyle should start with kids. The irony, Nikki observed, is that some kids develop a taste for fried foods at school where the canteens offer oil-rich delicacies like fried yam, kelewele, fried rice and stews with a generous covering of oil.

Catching them young with lifestyle classes as part of the basic school curriculum is also worth a shot, according to her.

Beyond that, parents can take it upon themselves to have the ‘NDC talk’ with their kids.

“When you have gotten something like a lifestyle-related disease, the first people you should be talking to should be your children. The younger ones… we have to make sure our youth understand that they have to eat well,” Nikki said.

Though the effect of our nation being ambushed by NCDs leaves its harshest marks on the individual, the bigger picture is not spared.

A couple of years ago, WHO estimated that in developing nations, heart disease, strokes, and diabetes alone reduce gross domestic product (GDP) by between 1 percent and 5 percent each year.

[contextly_sidebar id=”4HiJEHZBBNxGaxX49G6KjtUt5bgeXQ8s”]The cumulative economic losses to low- and middle-income countries from the four diseases are estimated to surpass US$ 7 trillion by 2025.

All this does not even consider the societal costs, which Dr. Commey notes is “ultimately much higher.”

The only good thing about this NCD ambush is that more and more people are slowly becoming aware of the growing chronic disease burden.

As Nikki noted, fear is proving to be the best form of awareness.

We have wandered in the dark for too long and after stepping on shards of glass and rusted nails, there is a sense Ghana is at least limping towards the wall in search of a light switch.

There have been a series of low-level interventions over the last decade or so and it took until October 2011 for the National Policy for the Prevention and Control of Chronic Non-Communicable Diseases to be put together.

Following the national policy, the NCD Prevention and Control was also established as one of the departments under the Public Health Division of the Ghana Health Service with the mandate to aid policy development, advocate for legislation that facilitates healthy living and promote NCD prevention and control interventions at all levels using accessible and affordable strategies and technologies, among others.

These efforts haven’t been too effective, as Dr. Commey admitted. “It trickles down from the top. If the country is not making it a priority, what can we expect.”

“When you talk about these infectious diseases then everybody knows that but now that the chronic diseases have started coming up, even at the global level, the attention is also shifting a bit. Unfortunately, the response is a lot slower than we would have wished.”

With a hint of cynicism, she also suggests that enough of the people who matter are also starting to feel the constrictions of NCDs.

“Government agencies are also noticing the trend and a whole lot of noise is being made at the top. If you take government agencies, the possibility that more than 50 percent of them will one form of NCD is really high… As the awareness is being created now questions will be asked; why are policymakers just quiet? Why is nothing being done on the ground?”

When it comes down to it, sometimes, it’s simply about the money. Money has always made the world go round.

A sad it may seem, the high health care costs, not the body count may also spark some change, Dr. Commey said.

“The donor agencies feel that for us not to put so much money into our health budget, maybe we should address these preventive aspects. It makes economic sense when we are able to bring it down to the money.”

In the short term, our lives are in our hands, quite literally; by the food we eat, our dumbbell reps and the like as some risk factors are generally modifiable.

“Because these are lifestyle-related diseases, the national effort is there but ultimately it comes down to the individuals effort to modify their lifestyle, eat healthily, exercise more so if the individuals don’t take it upon themselves as well, in addition to all the national policies we have, it becomes a bit more difficult in tackling these conditions,” Dr. Commey counseled.