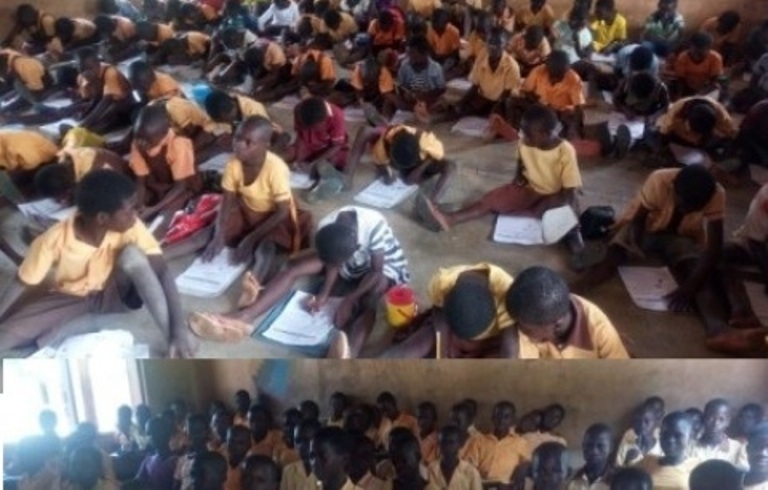 Most of the pupils at the Balungu-Nabiisi School in the Bongo District sit on the bare floor to learn due to lack of desks.

A  visit to the school showed that some of the classes in both the primary and Junior High Schools did not have furniture, thereby, compelling the pupils to sit on the floor during lesson hours while some classes had a few desks with three to four other pupils on one desk.

It was further observed that the kindergarten and primary one levels, which had about 100 and 110 pupils respectively, had no desks, forcing the children to sit on the floor to learn.

According to the enrolment figures in the various classes in the primary section, primary two to six had 81, 96, 88, 80 and 64 pupils respectively with about 28 desks in class thereby, compelling three to four pupils to sit on one desk with others on the floor.

[contextly_sidebar id=”HX6azuBBwXc2KYLGlKOtf05NfR7Jzy6Q”]At the JHS level, the about 80 pupils in the JHS one had no desks while the JHS Two and Three a few desks, forcing them to perch either three or four on one desk.

Besides, the GNA investigations revealed that due to inadequate classrooms, the management of the school, particularly the primary section, converted a staff common room into a classroom to accommodate the more than 100 kindergarten pupils, which caused overcrowding and unsanitary conditions.

Mr. Thomas Azure Alukuke, the headteacher in charge of the Primary School, said that the situation had adverse effects on the development of the children and did not guarantee the expected good academic foundation for them as future managers of the country.

He disclosed that due to the familiarity on the floor, the pupils found it difficult to sit on desks to write whenever they had the opportunity, making them develop poor handwriting and spinal cord problems.

Mr. Joshua Ageezabre, the headteacher in charge of the JHS section also indicated that about 50 pupils had been turned away due to the unbearable conditions at the school.

The headteachers further disclosed that the lack of teachers’ accommodation, coupled with the breakdown of the Bongo-Balungu Bridge had affected academic work negatively as teachers’ absenteeism was high during the rainy season.

The Head Teachers, however, disclosed that the community had voluntarily given out a piece of land for the construction of the teachers’ accommodation, but the school did not have the resources to build it.

They, therefore, appealed to other state institutions, Non-Governmental Organizations, philanthropists, individuals among others to assist the school in acquiring some furniture as well as build accommodation for the teachers to enhance academic activities to give proper foundation to the children.

Race against gender discrimination;  a won or lost battle? [Article]

Race against gender discrimination;  a won or lost battle? [Article]