Gov’t to compensate communities to be affected by Karpowership relocation 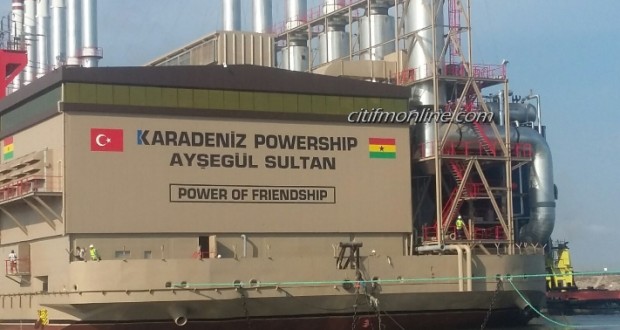 All is set for the Ghana National Gas Company to commence the payment of compensation to individuals and communities that would be affected following the expected relocation of Karpowership from Tema to the Western Naval Base in Sekondi.

The necessary land and property valuation have been completed, and Ghana Gas is ready to begin payment to the affected people in October this year.

Ing Robert Kofi Lartey, Director of Operations at Ghana Gas, who made this known during a community durbar at Shama in the Western Region, said the Company has followed the laid down procedures and all those affected by the relocation would be duly compensated.

The durbar attended by chiefs, queen mothers, representatives from GRICO, ECG, Environmental Protection Agency (EPA), Ghana National Petroleum Corporation (GNPC) and the affected communities made up of Inchaban, Aboadze, Essipon and Ngyiresia, was under the theme “Effective Community Engagement an Essential Component in Promoting Economic Development”.

The durbar was to enable Ghana Gas to further sensitize all stakeholders in the areas of operations of Karpowership about its principle of having a transparent, trustworthy and sustainable relationship.

Ing Lartey explained that any further delay in the relocation of the plant to Sekondi would cost the nation some 40 million dollars monthly.

“It is an aggressive programme and we will run with speed so no one should cross us with unnecessary litigations”.

The Karpowership is expected to added 470 megawatts to the national grid for 20 years.

The Director of Operations said the relocation of the plant was part of plans to get cheaper fuel such as gas from Atuabo to ensure constant power supply.

He noted that the relocation would positively impact both the government and communities, adding that the plant would now operate at a lower cost, create job opportunities as well as ensure massive development in the beneficiary communities.

Ing Lartey in this regard urged the beneficiary communities to cooperate with Ghana Gas to successfully relocate the plant, since they stood to benefit more than lose.

He said Ghana Gas normally made its presence felt anywhere it found itself, adding that with the relocation of the Karpowership, the affected communities would not be neglected but rather they would be provided with the needed amenities including good roads, bridges and skills training for the youth.

He said alternative livelihood programmes would also be put in place to support those who would be directly affected by the relocation of the plant and that a greater percentage of profit from the operations of the plant would be used for community activities.

Ing Lartey stated that Ghana Gas had done extensive engagements with the various communities along the pipeline of the plant, and commended the chiefs, opinion leaders and youth for their cooperation and support.

Mr Anthony K.K Sam Metropolitan Chief Executive of Sekondi -Takoradi Metropolitan Assembly (STMA), was happy that Karpowership was going to be relocated to the Western Region, stressing that it would go a long way to provide cheaper power to the numerous industries springing up in the industrial enclave of the Region.

He said it would also help address the job needs of the youth in the Region since new industries would be established. He pledged that they will closely work with Ghana Gas for the successful relocation of the plant.

Ogyeahoho Yaw Gyebi II, President of the Western Regional house of chiefs commended the government and Ghana Gas for deciding to relocate the plant to the western region.

He pledged that the chiefs would do everything in their capacity to prevent unnecessary impediments that might affect the operations of the plant.

Karpowership is the only owner, operator and builder of the first Powership, (floating power plant) fleet in the world. It is operational in Ghana, Indonesia, Lebanon and Zambia.

Rashid Pelpuo honored for contribution to humanity through poetry