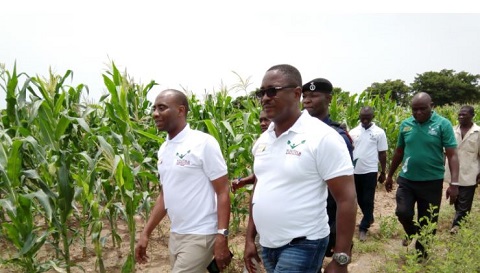 A Deputy Minister of Agriculture (MoFA) Dr. Sagre Bambangi has denied reports that tons of maize have been imported into the country this year.

According to him, the Ministry of Agriculture does not have any record of maize importation into the country this year.

Speaking to Bernard Avle on the Citi Breakfast Show, Dr. Sagre Bambangi, said even if permits were issued for the importation of maize, there were no documents to show that grains were actually brought into the country by the farmers.

“Because such imports are tax-exempts obtaining the imports license is one thing and importing is another thing and all these poultry farmers are aware that when you import such maize you will want tax exemptions because they are geared towards agricultural production.”

“The Minister of state who is in charge of the approval relating to imports of inputs products for livestock and poultry reported that those who obtained the licenses this year showed that none of them had imported.”

Dr. Sagre Bambangi further described the government’s decision to desist from the importation of maize as a very big achievement.

“We do not have any record on the imports of corn or maize yet. It is a very big achievement but it is good we try as much as possible to sustain the momentum so we do not slip back,” he said.

He attributed the strides government has made in the Agricultural sector to the introduction of the planting for food and jobs program.

Addressing MMDCES at an orientation conference in Madina on Wednesday [3rd October 2018], the President attributed government’s effort to end the importation of maize to the introduction of the planting for food and jobs.

Deputy Agric Minister, Kennedy Osei Nyarko recently said the NPP government has had a better cocoa production and pricing regime compared to the NDC who spent more on the sector.

Speaking on Citi TV’s Point of View, on Wednesday [3rd October 2018] the the Akim Swedru MP mentioned that President Nana Addo’s government has seen a higher productivity rate in the cocoa industry as compared to the NDC.

He explained that even though the NDC went in for  a higher loan for the cocoa industry they were only able to produce 690, 000 tonnes.