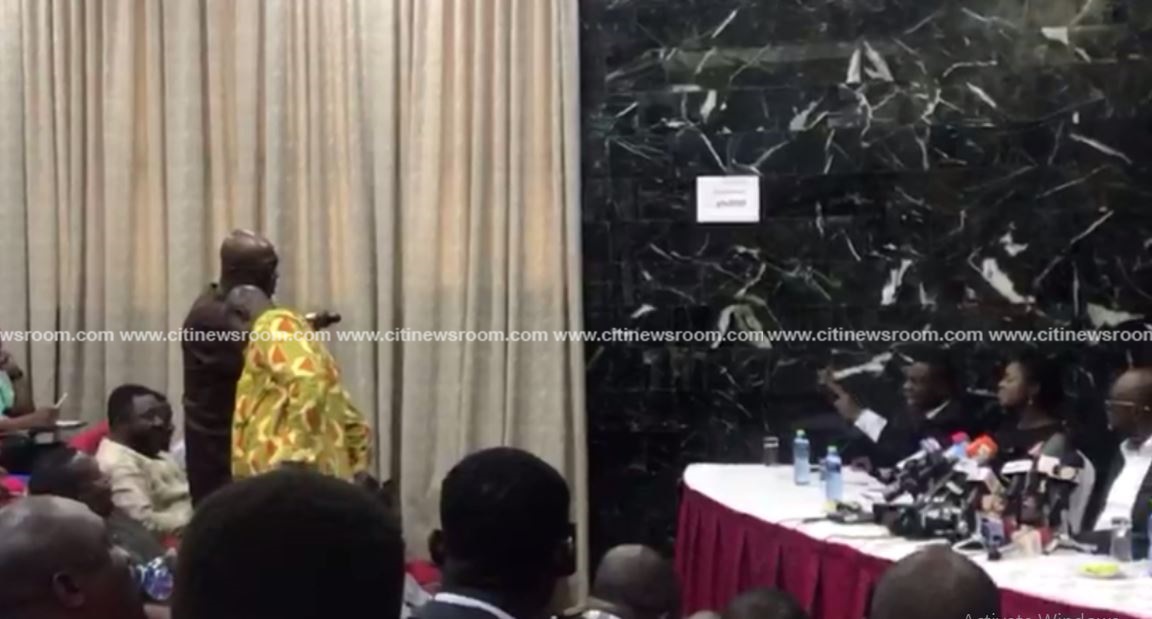 A member of FIFA’s Normalization Committee set up to manage Ghana football, Kofi Duah Adonteng, did not take kindly to a journalist who questioned his lateness to the Committee’s maiden press conference on Wednesday.

Agitated that the journalist, Ekow Asmah, had the courage to question his lateness and also remind him that it “sets a bad example,” Kofi Duah Adonteng shouted at him to “keep quiet.”

The lawyer and former Managing Director of Ghana Post, who had apparently arrived an hour late to the maiden press conference of the Normalization Committee, went on to describe the journalist’s concerns as stupid.

“Have you asked me why and how [I was late]? I’m not interested in this stupidity,” Mr. Adonteng remarked.

Not willing to allow his concerns to be brushed aside. Ekow Asmah a freelance journalist who is usually a panelist on Asempa Sports stated that Mr Adonteng’s conduct was not worthy of a member of the Normalization Committee.

The Committee member only arrived at the press conference when all his colleagues had already spoken and it was time for questions from journalists.

The journalist appeared to have been angered by the fact that the audience were asked to clap for Mr. Adonteng who had arrived late to the event.

“Punctuality is very important. As a member of the Normalization Committee, I expect that you set a very good example and this is a very bad example. The conduct is not befitting of a member that’s leading the transition to the new FA. I deem that he’s not fit to be on this Commission.”

Amid shouts of “you don’t respect”, Ekow Asmah responded, “he disrespected me and I had to point it out.”

The conference eventually continued after a few more exchanges.

FIFA named ex-Kotoko Board Member, Kofi Duah Adonteng as one of the members of the Normalization Committee in September.

The Committee is chaired by Dr. Kofi Amoah, and Former Airtel CEO Lucy Quist and Naa Odofoley Nortey, a board member of the Attorney General department completing the list of members.

The Committee replaced the Ghana Football Association’s Executive Committee and is responsible for the day-to-day running of the GFA.

The Normalization Committee, according to FIFA should not exceed the end of March 2019.

Lateness or disrespect for a time among Ghanaians is largely considered a national canker, and there have been several calls on Ghanaians to respect time.

This situation has led to the coinage ‘Ghanaman Time’, in reference to GMT or Greenwich Mean Time, which is the clock time at the Royal Observatory in Greenwich, London.

President Akufo-Addo, during the 2017 May Day celebration, complained about the effects of disrespect for time on national productivity and urged Ghanaian workers to change their ways.

“We arrive at work late and then spend the first hour in prayer, we become clock watchers and leave in the middle of critical work because it is the official closing time. Everything comes to a stop when it rains and we seem to expect the rest of the world also to stop.”

“We have no respect for the hours set aside for work. We pray, we eat, we visit during working hours. We spend hours chatting on the telephone… we take a week off for every funeral and then we wonder why we are not competitive,” President Akufo-Addo stated.