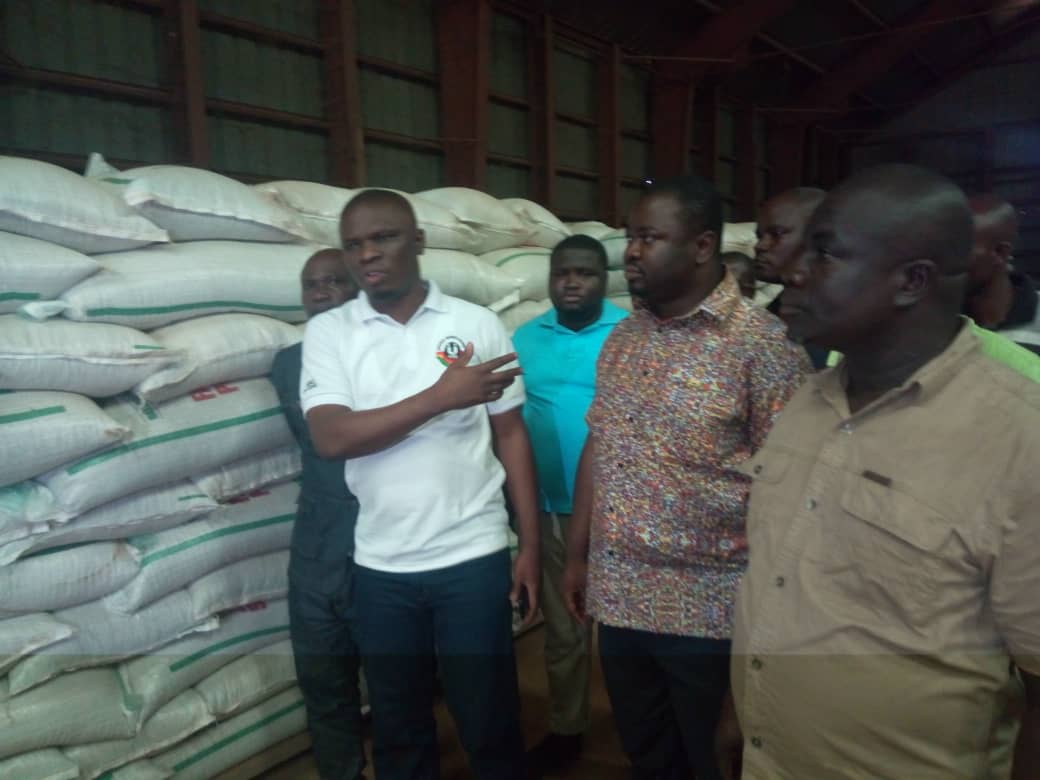 The National Service Secretariat (NSS) is targeting to expand its farm in the Ejura-Sekyedumase Municipality of the Ashanti Region to 5000 acres by next year.

Management said it has already secured tractors and other farming equipment including drones which will be used to spray the farm.

The secretariat said it has already harvested over fifteen thousand (15000) bags of maize on the 200 acres farmland, and has also begun cultivating on 250 acres for the minor season.

According to the Secretariat, its vision in the Agricultural sector goes beyond the usual farming to supporting Government’s flagship policies.

Executive Director for the NSS, Mustapha Yussif, said this when he toured the farms and the warehouse where the harvested produce are stored.

The produce from the Secretariat’s farms he said, will be used to support the Ministry of Food and Agriculture(MoFA) to implement the Planting for Food and Jobs program, and the Ministry of Education(MoE) for the Free Senior High School(Free SHS) policy.

He said the produce are given to the Buffer Stock at subsidized prices which are supplied to Senior High Schools in the country to feed the students.

He indicated that harvested maize from the NSS farms have been well-packaged and can be exported to neighboring countries.

Mr. Yussif said management was considering processing the maize into finished products which will be sold in the local markets and for export.

“You know the days where Ghana had state farms is no more.  NSS wants to fill that gap to ensure that in every region we have farms there to support the country’s food basket so that we can all have food security.  There is no day where we will be talking of importing food again into this country”, he emphasized.

The NSS has engaged over 200 locals within communities in the Ejura-Sekyedumase Municipality who are currently working on its farm at Eboum.

The workers were engaged to prepare the land, embark on weed control exercise, clear the land, harvest and package the produce.

They are also on the farm to augment the work of service personnel posted to the farms.

The Executive Director said the secretariat was creating employment for locals within the communities where the farms are located.

“We have over 200 workers that we have employed who are not National Service personnel. We have engaged them throughout the year and next year we will engage them again,” he said.

NSS farms to venture into other crops

Mr. Yussif disclosed that management of the Secretariat was in discussions with traditional authorities in the Brong Ahafo Region to acquire more lands for cashew, soya beans and cowpea production.

He said the secretariat is also venturing into animal husbandry where it has established piggery, rabbitry and livestock.

The farms he said is also into the production of fresh eggs for domestic and commercial purposes.

He revealed that the NSS was also in discussions with the Ghana Education Service (GES) to implement the school farm project which will see every school owning a farm.

He commended the Ejura Traditional Council and the community for supporting the NSS farm since its establishment.

Ashanti Regional Director of the NSS, Opoku Mensah, said the secretariat has become a key stakeholder in the implementation of Government’s flagship policies.

He said the establishment of the NSS farms was for profit purpose, but also to augment the President’s vision in the implementation of key policies of the government.

He congratulated personnel who were posted to the farms and called on Ghanaians to help the government’s vision of safeguarding the country’s food security.

The NSS has constructed a fencewall and a borehole for the Ejura Government Hospital.