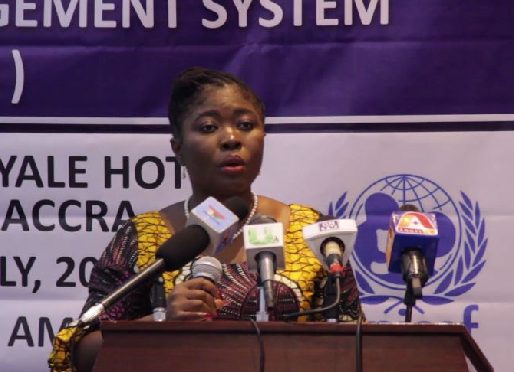 Acting Director of the Department of Children, at the Ministry of Gender, Children and Social Protection (MoGCSP), Mrs Florence Ayisi Quartey

The Acting Director of the Department of Children at the Ministry of Gender, Children and Social Protection (MoGCSP), Mrs Florence Ayisi Quartey, has said that safeguarding the welfare of children and their freedom of expression, is a collective responsibility.

She said the Children’s Act, passed in 1998, binds leaders, parents, guardians and the country as a whole to protect children’s rights, and there was the need for Ghana to develop and strengthen systems that would be more preventive and focused towards the welfare of children.

“Every child is entitled to express his or her fundamental human rights, to function well in society but it is incumbent on stakeholders to ensure these rights are enjoyed in a protected environment that holistically conforms to the Child and Family Welfare Policy 2015.”

Mrs Ayisi Quartey said this when she spoke on behalf of Madam Gifty Twum Ampofo, the Deputy Minister of Gender, Children and Social Protection at a Stakeholders Forum dubbed: “Access to Justice for Youth and Persons with Disability in Ghana” in Accra.

Organized by Youth Bridge Foundation (YBF), a youth-focused Non-Governmental Organization, committed to youth development in Ghana, the forum followed-up on initial consultations and sought to validate the key messages developed from the Child and Family Welfare Policy 2015 as well as the “PUZZLED” drama series.

She expressed happiness about YBF’s partnership with the Ministry towards the projection and promotion of the Child and Family Welfare Policy 2015 and its timeliness, as the Ministry is planning towards public sensitization.

Ms Esther Yayra Attipoe, the Legal and Advocacy Manager of YBF said increasing awareness and deepening young person’s knowledge on the Children’s Act 560 and the Juvenile Justice Act 653, was appropriate.

She added that the inclusion of Persons with Disability (PWD’s) in sensitisation engagements especially on the National Child and Family Welfare Policy 2015 was timely.

Ms Attipoe who is also the Project Manager of “Access to Justice for Youth and Persons with Disability in Ghana” implemented by YBF with funding from OSIWA explained that engaging younger persons with disability, on their rights to participate in decision making processes at the local levels would create the platforms for their engagements with local government officials.

According to her, in line with building on the Foundation’s previous children’s right intervention, “Securing the Future of Young People in Ghana through Improved Juvenile Justice Administration” was the second phase of the project rolled out.

“This new Project hopes to scale-up successes and lessons learnt from phase one; basically, through advocacy for policy makers to produce policies in accessible formats for young persons with disability while consolidating key stakeholders’ engagement to deepen ownership,” she said.

She noted that the ongoing Project was being implemented in six districts in three regions of the country. These are Suhum Municipality and Akwapim North district in the Eastern Region, Agona West and Cape Coast Metropolitan in the Central Region and Ahanta-West and Sekondi Takoradi Metropolitan Assembly in the Western Region.

Mr Seth Oteng, the Executive Director of YBF, said: “Our commitment to youth –inclusive development is critical for nation building” stressing that opportunities must be equitably shared without any discrimination.

“That is why YBF is championing policies such as Right of the Juvenile to Justice to enhance youth development,” he added.

He expressed worry about the lack of capacity among the youth to appreciate the beautifully worded and well-intended policies as well as the available platforms to engage in discourse, creating gaps in the implementation of the Child and Family Welfare Policy.

These gaps he said needed to be addressed for the development of the youth.

Touching on the “PUZZLED”, a drama series based on key messages developed by YBF from the Child and Family Welfare Policy 2015, Mr. Oteng noted that he was looking forward to see the “PUZZLED” helping solve societal ills confronting the youth in the country.

The “PUZZLED” brings to bear some of the inhumane plights the youth are exposed to in the country and set to be premiered by YBF.

The forum brought together about 26 participants drawn from government machinery and agencies that included the MoGCSP, Department of Social Welfare, Teachers and parents from Special Schools in Project districts, youth-led community-based organizations as well as in and out-of-school youth that included PWD’s.

Palm returns as an ‘ultra-mobile’ smartphone