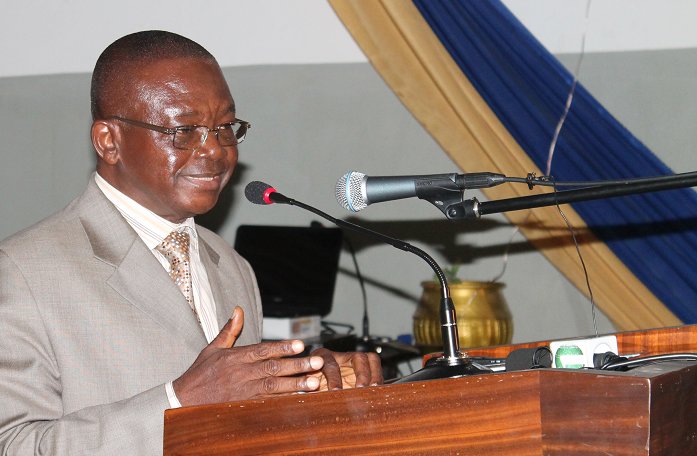 The National Democratic Congress (NDC), has asked President Akufo-Addo to remove the Board Chairman of the Audit Service, Prof. Edward Dua Agyeman.

According to the General Secretary of the NDC, Johnson Asiedu Nketia,  Prof. Dua Agyeman does not have the integrity required to hold the position.

Prof. Dua Agyeman is also the chair of an audit committee charged to investigate allegations of corruption made against about 20 former officials of the John Mahama government.

“Dua Agyemang does not have the integrity and character to undertake such an assignment. The person who has been appointed by Nana Akuffo Addo to chair the Audit Service Board and who has been asked to recruit these private firms in the name of cabinet committee secretary is the one who has now been recycled to chair the audit service board to fight corruption.”

Recounting some of Prof. Dua Agyeman’s alleged corrupt deeds, Asiedu Nketiah said the board chair of has engaged in many fraudulent activities.

“In 1983, Dua Agyemang was banned by the Institute of Chartered Accountants Ghana from practicing accountancy and auditing in Ghana for forging an audit report for a private firm whose accounts he had neither seen nor audited.  The same Dua Agyemang, in 1986 led a team to conduct special investigations, at the end of the exercise he presented a forged report causing some heads of departments to suffer unjustly.”

The Chairman of the Audit Service has recently been accused of interfering in the work of the Auditor-General.

The Auditor General, Daniel Domelevo, has petitioned President Akufo-Addo over what he called unlawful interference in his work by the Service’s Board Chairman.

He cited procurement manipulations, interference of audit processes, and unlawful circulation of audit findings among other things, as the basis for his request for presidential intervention.

In the Auditor General’s petition, he said he received a complaint from a prospective vendor that his firm was stopped from submitting proposals.

Mr. Domelovo said this was done without his knowledge and the knowledge of the Public Procurement Authority.

According to him, “the Chairman admitted to the offense with the excuse that the law did not exist during his tenure of office as Auditor General.”

Meanwhile, the Presidency has set-up a committee to investigate concerns of interference raised by Auditor the General.

The Chairman of the Audit Service Board, Professor Edward Dua Agyeman, has denied allegations that he is interfering with the work of Auditor General, Daniel Yaw Domelevo.

The Board Chairman insisted that roles are clearly defined, and the Board was not interfering in the work of the Auditor-General.

He maintained that he was not undermining the Auditor General.

“I have explained the circumstances surrounding all [the concerns he has raised]. Nobody will undermine the Auditor-General for anything.”

While denying the allegations, Professor Dua Agyeman also stated that he has also petitioned President Akufo-Addo on what he considers the Auditor-General’s non-cooperation.