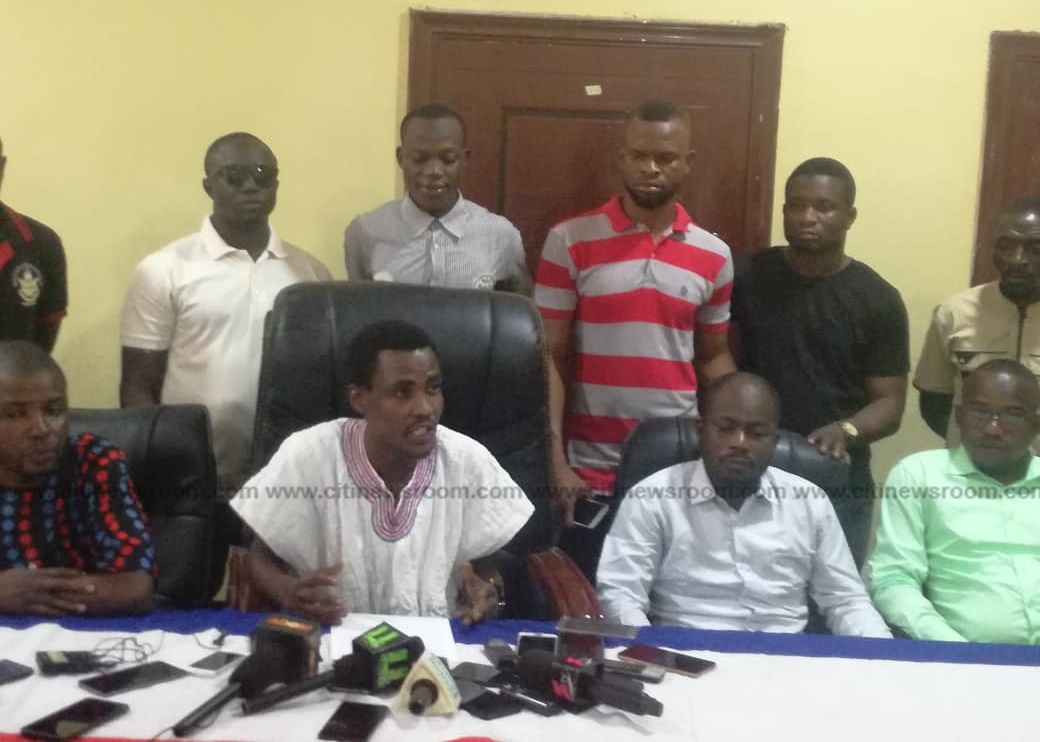 The NDC Flagbearer hopeful, John Dramani Mahama, during his recent campaign tour of the Northern Region accused government of neglecting the area.

According to the former President, the Eastern Corridor road project has been stalled, for which reason yam farmers could not transport their produce to southern markets.

At a news conference, the NPP Northern Regional Communications Director, Mohammed Issah, asked the former President to desist from propaganda.

He underscored the need for John Dramani Mahama to behave as a Statesman, and concentrate on his campaign to lead the NDC, rather than peddling falsehood.

Mohammed Issah said Mr. Mahama has no locus commenting on the free Senior High School programme, adding that the Nana Addo administration will not be distracted by falsehood.

JOHN MAHAMA MUST APOLOGISE TO NORTHERNERS

Ladies and gentlemen of the media. First and foremost, let me thank you sincerely for honoring our invitation. As you are aware already, the former president H. E John Dramani Mahama sneaked out of his native region-Northern Region, after spending five days, touring the region to campaign for himself to be elected as the Presidential candidate of the opposition NDC.

Ladies and gentlemen, the former president arrived in the region together with some of his incompetent former appointees on Tuesday, the 2nd of this month, with a truck full of lies and propaganda. In view of all these, we have invited you all here to serve as a vehicle that will convey our concerns and reservations to the former President and all well-meaning northerners that, John Mahama must apologize unconditionally to us for his recklessness by selecting wrong gears that reversed the economic progress of our region in his days as leader of the nation and largely, the consistent lies he peddled throughout his tour.

The Fufulso-Sawla Road, a $157M facility was partly diverted to do the Busunu-Daboya road after taking some aspects of the contract agreement off. This contract was awarded to yet another family member of John Mahama, Mr. Peter Mahama. Today, the road that was purported to have been done under John Mahama is still not completed after squandering the allocated resources for the road.

The Larabanga-Sawla stretch of the Fufulso-Sawla road has developed “manholes” after several maintenance some few years after completion (Pictures attached).

This is replicated in so many parts of the said road. H. E John Mahama must stop provoking us. The Salaga road was one of the so called abandoned roads according to the former president. The Tamale-Salaga-Mankango road was started under the NPP.

The road was done and tarred from the Tamale Metropolis to Kpalbe in the East Gonja District. This road never saw any face-lift until 2016 when the Gonjaland Youth Association scheduled their 40th anniversary celebration for Salaga. For reckless partisan political gains, Mr. Ibrahim Mahama, yet one of the numerous family members of John Mahama, who controlled and grabbed almost every single contract under John Mahama’s NDC moved to site with all the pump and pageantry without any viable contract.

Mr. Ibrahim Mahama failed to tar even one foot length of the said road. It is therefore insulting to us as northerners for John Mahama to claim he awarded that contract.

If indeed he claimed to have awarded the road on contract he should provide us with the contract documents and the sources of funding as well as the level of completion at the time he left office.

The former President complained about reduced prices of Yam in the north and attributed same to bad roads and lack of credit from supposed collapsed banks he bequeathed to the NPP government. Really?

Are you serious Mr. Former president? Is it not unpatriotic for a former president who presided over a very weak economy as one that was handed over in 2017 to turn back in just 18 months to ask for an increase in the prices of food items? Do you care about us as northerners at all? So the former president expects us to spend so much even on the food we produce?

Mr. Former president, we as Northerners deserve better. Probably because the former president, whiles in government was always on a helicopter when he visited his northern brothers, he never knew the roads were same under him. John Mahama has soon forgotten that, the northern region he flew across throughout his 8 years rule is not changed.

The roads you plied today were never imported from Dubai or Bahrain to the North. They existed under your miserable watch Mr. former president. You probably never saw them because you never knew you had people you belong to. You lied to us through your loudest “green book” that these same roads were done. Several pages of the green book indicate that the eastern corridor roads of which these specific routes are a subset were done. A statesman of your stature and for that matter a responsible Northerner should not be doing this to us. We deserve better.

OTHER PROJECTS ONGOING Did the ex-president claim the NPP government has stalled projects he started in the North? Is it not so pitiful and shameful, that a supposed statesman get so disingenuous in the name of petty partisan politics in the manner you did Mr. Former president? Were you not the same John Mahama who on Wednesday, the 3rd of October “inspected” the construction of the Salaga Hospital that was abandoned under your watch? The contractor is currently busy on site and working towards completion under His Excellency Nana Addo. The Buipe Accident and Emergency Center and the Tolon District Hospital that were ratified in parliament have seen some commitment and work is ongoing.

Indeed, the Mpaha and Sang Community Day schools that were abandoned under your NDC is currently admitting students for the free SHS you are planning to abolish in the very unlikely event you win the 2020 elections.

Work is ongoing on the final face of the Tamale Teaching Hospital. Perhaps the former president had a different appreciation of the actual context of the statement he made throughout his campaign tour in the Northern Region. We have aptly demonstrated from the numerous examples above, that the Akuffo Addo-Bawumia government did not only continue with the projects the NDC left behind as a responsible government but also secured funds to continue with some of the projects that were abandoned without fund allocation. Former president Mahama has so soon forgotten his numerous lies to Ghanaians. You have soon forgotten of the tales you told the people of Damango on their water project. The promise to secure a region for Gonjalanders?

Did the former president say in Nalerigu to the same students he selfishly and wickedly took their allowance from, that he would give them jobs in his phantom second term? Mr. Former president, did you say that? Are you not the same John Mahama who denied several batches of graduates from the same institutions postings? When at all will these insults at us stop? The NPP government under his Excellency Nana Addo has constructed a Dam for the people of Kpegu in Kumbungu District. Several other Dams are currently being constructed in Kupoto in the North Gonja District, Sandu in the Savelugu Municipality and several others at various stages of completion across the northern region. Attached are some pictures for verification. The Nana Addo-Bawumia NPP government that took over from your miserable claws of torture has in 19 months put together a motorking factory at the industrial area within the Tamale South Constituency.

This factory has since put food on the table for several unemployed youth in the Metropolis. It is unfortunate, that your incompetent former ministers, appointees and regional executives failed to abreast you on same. Mr.Former president, we the people of the North would like to plead, that you desist from commenting in the manner you did recently on the Free Senior High School Policy being implemented. We saw how you implemented your own “FSHS” before the 2016 polls. We saw how GH¢38.00 was paid for each student who is mandated to pay sometimes up to GH¢1,000.00 per year. We saw how our children spent time at home whiles their counterparts in other parts of the country studied in classrooms. We saw how students from this part of the country were asked to go home because of unpaid feeding grants by your then incompetent government.

We are not ready to get back to those days. We are told how you were moved from the Southern part back to the Northern part of the country, just to enjoy Free Education. Please allow us enjoy the same privilege as you did.

We consider the free SHS policy as a “Jihad” to us as Northerners. In conclusion, we want to admonish the former president H. E John Mahama to as a matter of urgency and in his own interest manage his penchant for lies and propaganda and rather concentrate on his campaign where his own appointees and serial callers are contesting him. We call on H. E the former president John Mahama to apologize to the people of the north for the series of tales he peddled. Mr.Former president, you must apologize to us for suggesting or contemplating a review of a policy that has come to ameliorate the suffering we went through under your watch. The people of the North deserve an apology from you.

Enough of the insolence God bless the NPP God bless our homeland Ghana Thank You.