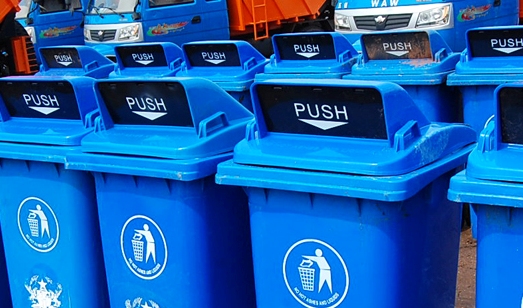 Waste management giant, Zoomlion Ghana Limited, is in the process of distributing one million waste bins to households nationwide.

The company says the exercise will commence immediately data on households and their waste generation capacities are made available.

Executive Chairman of the Jospong Groups of Companies and founder of Zoomlion,  Joseph Siaw Agyepong, made this known in Accra when he was speaking to  Metropolitan, Municipal and District Chief Executives (MMDCEs) at a capacity building conference for MMDCEs.

The capacity workshop was under the auspices of the Ministry of Local Government and Rural Development.

He said Zoomlion has secured a loan facility of $10 million from Ecobank as a commitment to help achieve the President’s vision of making Accra and by extension Ghana the cleanest in Africa.

He charged the MMDCE’s not to allow the President’s vision to fail by ensuring that people embrace and make good use of the bins from Zoomlion.

Mr. Agyepong said places such as Singapore, Dubai, Mauritius and Kigali were once bedeviled with filth, but are most adored and clean today due to practical strategies which is one reason why he believes in the president’s vision.

He went further to proffer a single solution to Ghana’s waste problems as “the bin solution.”

He said when households do not have bins, they will put refuse they generate into gutters.

To stop this, Siaw Agyepong said there is the need for concerted efforts by especially the MMDAs/MMDCEs to ensure that the bin distribution is successful and that people use them for the purpose for which they are distributed.

The waste management entrepreneur said as leaders in their various MMDAs with the requisite powers to enforce the bye-laws, they could not sit and watch their communities get overwhelmed with waste to bring the president’s vision into question.

He said the bins will cause some savings on NHIS, prevent communicable diseases and keep the communities clean.

The Zoomlion boss further promised to distribute a hundred mini plastic crushers free of charge to MMDAs who have ready sheds to install them and crash plastics for his conglomerate to buy for recycling purposes.

He disputed the fact that banning of plastics will be the solution to the waste problems.

He said waste is a resource like gold and oil among others, that when properly managed can bring good returns to the nation in terms of revenue and employment generation.

“Waste is a resource like gold, diamond, timber and cocoa- you must see it as a big investment opportunity for your district as recovery levels are 100 % at all times”.

In response, the MMDCEs applauded the entrepreneur for his gesture and promised to support the waste management company on its filth free country agenda.