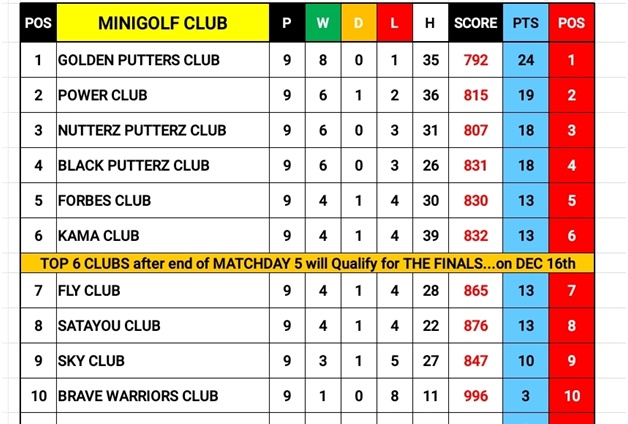 The Match Day 3 was a spectacular show down at the eleven (11) top African Minigolf Clubs such as Fly Club, Golden Putters, Power Club, Satayou, Forbes Club, NutterzPutterz, Wonder Club, Brave Warriors, Kama Club and Black Putters went “putter to putter” to save as many points as possible for a safe place in the top 6.

As in all Minigolf Competitions, the GMF ensured that camera equipment and digital scoring systems were in apt and in good shape for playback and accuracy in record keeping.

Golden Putters did not fail to disappoint their numerous fans as they stole the top position from the electrifying Power Club with a 12 point lead.

The Club garnered a total score of 792 which placed them in a comfortable lead with 24 points.

The Somasse brothers won the league’s ad hoc prizes as the Lowest Score in the league and for Lowest Pairs Scored.

Power Club came in second on the league table with a total score of 815 and 19 points while still maintaining the record for highest holes-in-one putted at 36.

It’s yet still nobody’s game as points are almost evenly matched but one cannot omit the brooding rivalry going on in the league which looks like the Francophone clubs have the upper edge with Golden Putters and Kama then again Ghanaian clubs like Black Putters, Power, NutterzPutterz and Forbes are planning a major “coup d’état” on Match Day 4.

The Minigolfers paired up against one another to play three rounds of pure Minigolf at its best under the League format with 18 holes final scores combined as one total in favour of the winning club. Winners earn three points; draws attract two points while a loss cost one point per game.

The competition continues this Sunday 2nd December with matchday 4 fixtures from 3 – 5pm at Ridge Sport City.

Top 6 clubs after week 5 of the league will qualify to the finals on December 16th to declare the champion club who will win the 1st prize of ghc 2500.

There will be with an additional 10 prizes awarded to runners up & best league players with Melcom home appliances, Latex Foam mattresses, Azar paints, Interplast products, shopping & restaurant vouchers from our loyal sponsors.