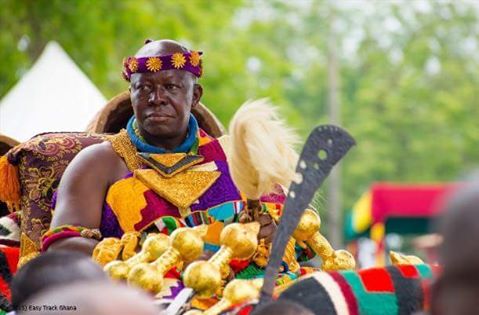 The Asantehene and Chancellor of the Kwame Nkrumah University of Science and Technology (KNUST), Otumfuo Osei Tutu II, has asked unions of the school to allow him deal with the standoff between them and the government.

The processes for the constitution of a new governing council for KNUST has hit a dead-end due to an ensuing impasse between the government and the unions of the school over who qualifies to be a member of the council.

[contextly_sidebar id=”fmy8bMF7W3CIFMo1SExUtzNWr56Fvp1r”]The government has indicated that it will not accept any representative from the union who was part of the dissolved council, but the unions insist that the government’s stance is undemocratic.

The University Teachers Association of Ghana (UTAG) together with other unions including the Teachers and Education Workers Union, Ghana Association of University Administrators, alumni of KNUST, and some professional and non-professorial representatives on Wednesday held a press conference to indicate their unpreparedness to yield to the government’s position.

But the Asantehene communicated to them after a meeting with them that, they should allow him to handle the issues.

He said he has taken their concerns into consideration and he is taking steps to address them.

Otumfuo however urged the unions to stay calm throughout the process.

UTAG therefore indicated that it had agreed to stay calm and allow Otumfuo deal with the matter.

The National President of UTAG, Dr. Eric Opoku-Mensah, in an interview with Citi News said.

“Otumfuo Osei Tutu II invited National UTAG and KNUST UTAG to Manhyia Palace to deliberate on this whole matter and UTAG as a result of the respect we have for Otumfuo and the sober deliberation we had, we decided that we are not going to comment further on the issue and that we defer everything to Otumfuo for him to see to the peaceful resolution of the whole matter,” he said.

KNUST has been closed down for about 2 weeks following a violent student protest against management of the school.

The government immediately dissolved the school’s governing council and arbitrarily constituted an interim council which resulted in several agitations and protest from stakeholders including UTAG and the association of University administrators.

After an intervention by the Chancellor, the government decided to allow him led the efforts to constitute a new council for the school to enable the school reopen today, 8th November 2018, but it appears the school cannot reopen as the government and UTAG are challenging each other on the composition of the council.

The government believes no member of the dissolved council should be given a place on the council, but the unions insist that their representatives were elected democratically and cannot be forced out of the new council.

The new council was supposed to be constituted by last week Friday, but the impasse did not make that possible.