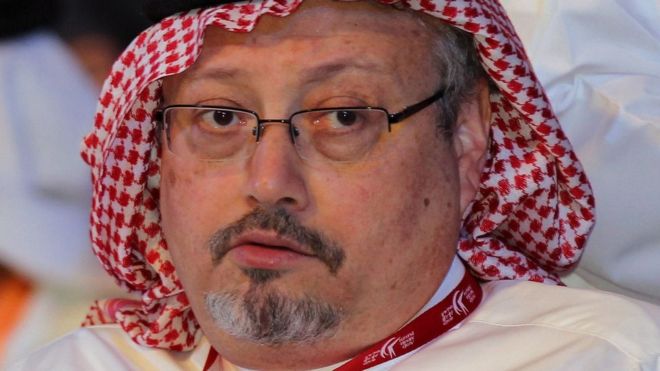 The Minority in Parliament has called on the House to condemn the murder of Saudi Arabian Journalist, Jamal Khashoggi.

Khashoggi, a columnist for The Washington Post and Saudi royal insider-turned-critic, went missing after entering the Saudi consulate in Istanbul on October 2 to obtain paperwork that would allow him to marry his Turkish fiancée.

Later on, Turkish officials disclosed that they had evidence to prove that Khashoggi, a prominent critic of the Saudi government, was murdered by a team of Saudi agents.

[contextly_sidebar id=”oQelwyLywUQXSCXyCYRZZygxtO7dDztS”] Speaking at the commencement of proceedings in Parliament on Wednesday, Haruna Iddrisu, the Minority leader said the act was unacceptable.

Mr. Iddrisu added that Ghana must not stand aloof from these circumstances.

“This Parliament should not accept coverup in the convenient interest of trade with Saudi Arabia. We cannot accept this. If this was done within the corridors of the United States, you know what would have been done. Human rights are indivisible; we’ve all made it a commitment to respect them. The US must respect that criminal activity has been occasioned and ensure that there are no coverups and the perpetrators are punished.”

“I demand that our Parliament condemns this act and that those behind this act are punished accordingly,” he noted.

Meanwhile, Sarah Adwoa Safo, Deputy Majority Leader, indicated that the Majority supports the Minority’s call because the rights of all persons, particularly journalists must be jealously guarded.

“We are accepting democracy, that means that we should tolerate criticisms from journalists. Such criticisms are no justifications that we take one’s life. This has to be condemned by all of us in parliament.”

The evidence for this came from a joint Saudi-Turkish task force, broadcaster al-Ekhbariya said.

It also reported that prosecutors were questioning suspects as a result of the joint investigation.

Saudi Arabia had initially denied all knowledge of the writer’s whereabouts when he went missing on 2 October.

The kingdom has since admitted he was murdered at the Saudi consulate in Istanbul, blaming a “rogue operation”.

The official Saudi Press Agency reported that Crown Prince Mohammed bin Salman chaired the first meeting of a committee to reform the state’s intelligence services, which was set up following Mr. Khashoggi’s death.

Prince Mohammed vowed to punish those responsible, but media reports have quoted Turkish security sources as saying the operation was run by a top aide to the prince.

Rogue branding – A case study of the Shatta Wale brand

Rogue branding – A case study of the Shatta Wale brand