Police defend use of force on Madina-Adentan protesters 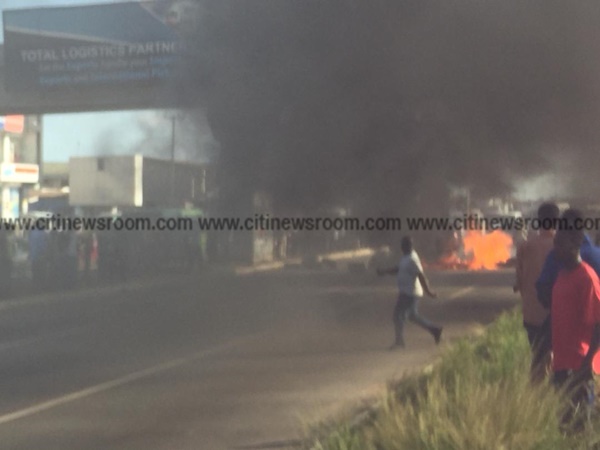 Residents protested after a student was knocked down on the highway

The Ghana Police Service says it employed “appropriate riot control methods” during the protest by residents along the Madina-Adentan highway despite reports of excessive force used by police personnel present.

“Preliminary investigations into yesterday’s rioting show that Police employed the appropriate riot control methods,” as a statement from the Police said.

The statement, however noted that “in the process, a boy of fourteen years was injured and was treated and discharged at the Nyaho Clinic in Accra. There is no record of any other injuries related to the riot control.”

At about 3:30 pm on Thursday, Police responded to the protest on the Adenta stretch of the highway, which they described as rioting.

The protests, which disrupted the flow of traffic, was in response to the knockdown of a teenage girl who is a student of the West Africa Secondary School.

The protesters blocked the road and burned tyres in anger, following the incident.

When police arrived to restore calm, there were reports some protesters hurled stones at them.

Calm was eventually restored and the road was opened to traffic at about 7:00pm.

The driver, who knocked down the student has also been arrested and remanded, according to the statement.

“Police have since increased presence in the area to ensure the safety of residents and road users. Motorists on that stretch of road are also urged to exercise the utmost caution to preserve lives,” the statement added.

Nonetheless, the police were widely criticized for using excessive force against the protesters.

Footage from the scene has been described by some as resembling a war zone as heavily armed police in full gear were seen and heard firing gunshots.

The protests sparked the government into action as it announced hours after the protest that work is to commence on the uncompleted footbridges on the Madina-Adenta highway from next week following the death and subsequent protests on Thursday.

“Work is to be done on an accelerated basis with multiple contractors to ensure quick completion,” a statement from the inter-ministerial Committee on Roads and Highways, Transport and Interior stated.

Protesters claim over 190 people have reportedly been knocked down on the stretch in 2018 alone.

There was a similar protest last Friday by some residents of Adenta Barrier after a resident was killed in a hit-and-run.

A middle-aged woman was also hit by a truck at Fire Stone earlier this week.