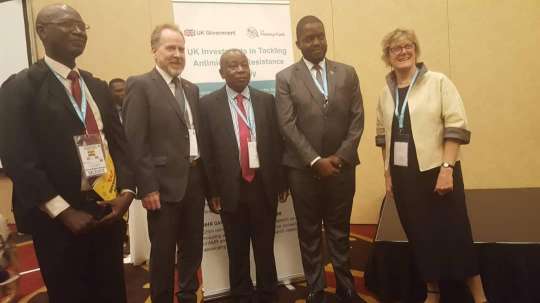 The United Kingdom through the Fleming Fund will provide support to Ghana to tackle antimicrobial resistance (AMR) to drugs.

The Fund would be used for laboratory capacity-building and surveillance for AMR.

The Fleming Fund is providing support with a range of initiatives and country grants with the aim of increasing the quantity and quality of data available, to better understand the scale and scope of AMR within high-risk regions.

Drug-resistant infections are already on the rise; globally at least 700,000 die each year of drug resistance illness such as bacterial infections, malaria, HIV/AIDS or tuberculosis.

Speaking at the Fleming Fund Reception in Accra, Professor Dame Sally Davies the UK’s Chief Medical Officer, said there is the need to unite and learn from one another and as well as scale up these ideas to address the global threat of AMR.

She said in Ghana among the objectives was; to support ‘One Health’ governance structure for AMR and antimicrobial resistance use (AMU) surveillance; to support a government-led system of collecting, analyzing and reporting AMR and AMU data on national and international platforms, through the AMR National Reference Laboratory at the University of Ghana and 11 sentinel sites.

She said it would also highlight on strengthening AMR /AMU surveillance in animals, including support to the AMR National Reference Laboratory for animal health located at the Veterinary Services Department.

Prof Davies said they were supporting countries to develop their global action plan, and they were spending £256 million essentially around data, trying to help countries improve their surveillance for AMR and make their systems work better.

She said the UK Government was investing to make Ghana their regional hub for the Fleming Fund working across West Africa – Ghana, Nigeria, Sierra Leone, Senegal and Burkina Faso.

Mr Kwaku Agyemang- Manu, Minister of Health, said AMR is a developmental issue that seeks to threaten and wipe out all the majority of the gains of the Sustainable Development Goals (SDGs), as such, everyone must take action.

He said Ghana is pursuing this health security threat and making sure this was followed under ‘One Health Agenda’ because it was the right thing to do, especially when President Nana Addo Dankwa Akufo-Addo, was a co-advocate for the SDGs.

Mr Agyemang- Manu said pursuing Agenda 2030 by leaving no one behind would become meaningless if we do not pay attention not just on the development of action plans, but through effective implementation of the plans and strategies for accountable governance and also keeping the momentum on AMR.

“This second Call to Action is a call for commitment and also to ensure that all the ‘voices’ are heard and their inputs also shape recommendations for monitoring strategies and activities”, he added.

Mr Philip Smith, Country Director, UK’s Department for International Development (DFID) in Ghana and Liberia, said failing to take sufficient action would mean that 10 million people would die annually from AMR-associated causes by 2050, and majority of these deaths will occur in Africa and Asia.

He said, however, Ghana was a development success story; as it made huge progress in achieving the Millennium Development Goals, the precursor to the SDGs.

Mr Smith said these include; halving extreme poverty, establishing a social safety net system and a National Health Service – all of which will contribute towards mitigating the impact of AMR.

He said the phrase ‘Ghana Beyond Aid’ was truly inspiring and applauded by the UK and all development partners, however, it must address the issue of why, despite record economic growth, inequality in Ghana was rising.

He said “Ghana Beyond Aid” agenda of the Government could not just be about Ghana’s “self-reliance” through industrialisation; saying “it has to address the ‘self-reliance’ of the poorest and most marginalised Ghanaians”.

Mr Smith said there is the need to maintain concerted efforts to address these inequalities not just in Ghana but across the world, adding that “it is the poorest and most vulnerable who are likely to be most affected by AMR, and we bear them a huge responsibility for urgent, effective and collective action”.

Building on the success of the October 2017 Call to Action on Antimicrobial Resistance (AMR) in Berlin, the governments of Ghana, Thailand, and United Kingdom, with the Wellcome Trust, World Bank and UN Foundation, have together committed to organise a follow-up event to help advance the global response to rising rates of drug-resistant infections.