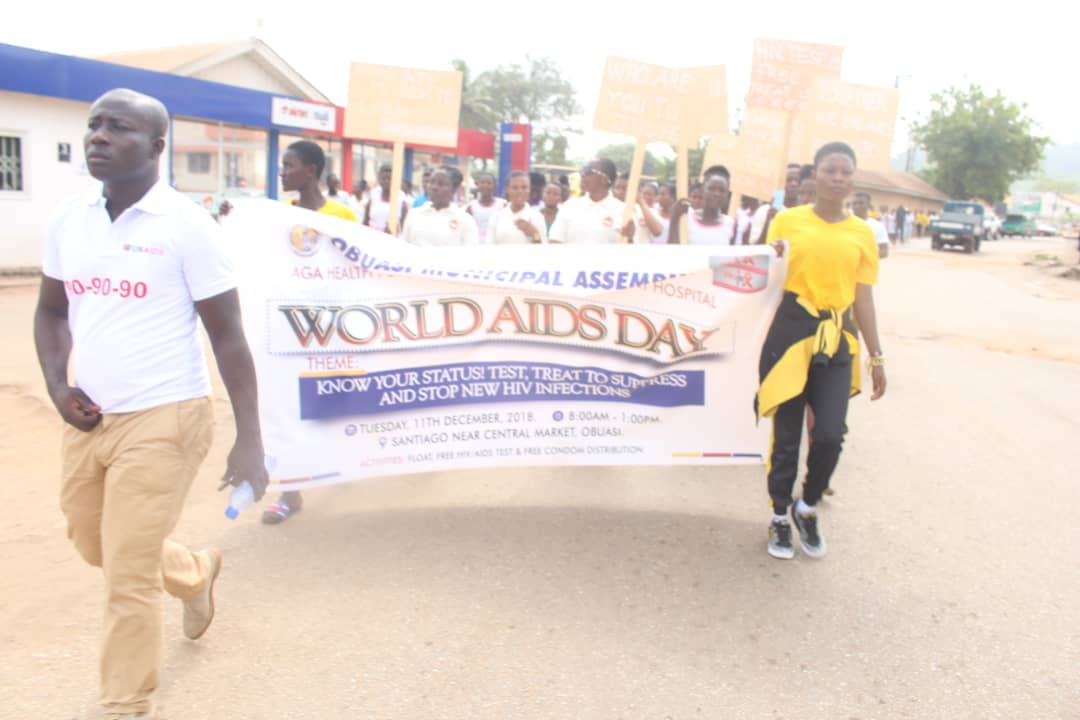 Originally marked globally on December 1, World AIDS Day is a day set aside by UNAIDS to inspire global solidarity for persons infected by HIV as well as commemorate those who have lost their lives to the epidemic. It is also a day set aside to assess the impact of the epidemic on nations and join hands to plan strategies to minimize its impact.

Globally, 36.7 million people were living with HIV at the end of 2016. In Ghana, the National HIV/AIDS prevalence among pregnant women attending antenatal clinic in 2017 is 2.1%. Out of 40 HIV sentinel Sites in Ghana; Obuasi recorded the highest HIV prevalence of 5.2% in 2017. 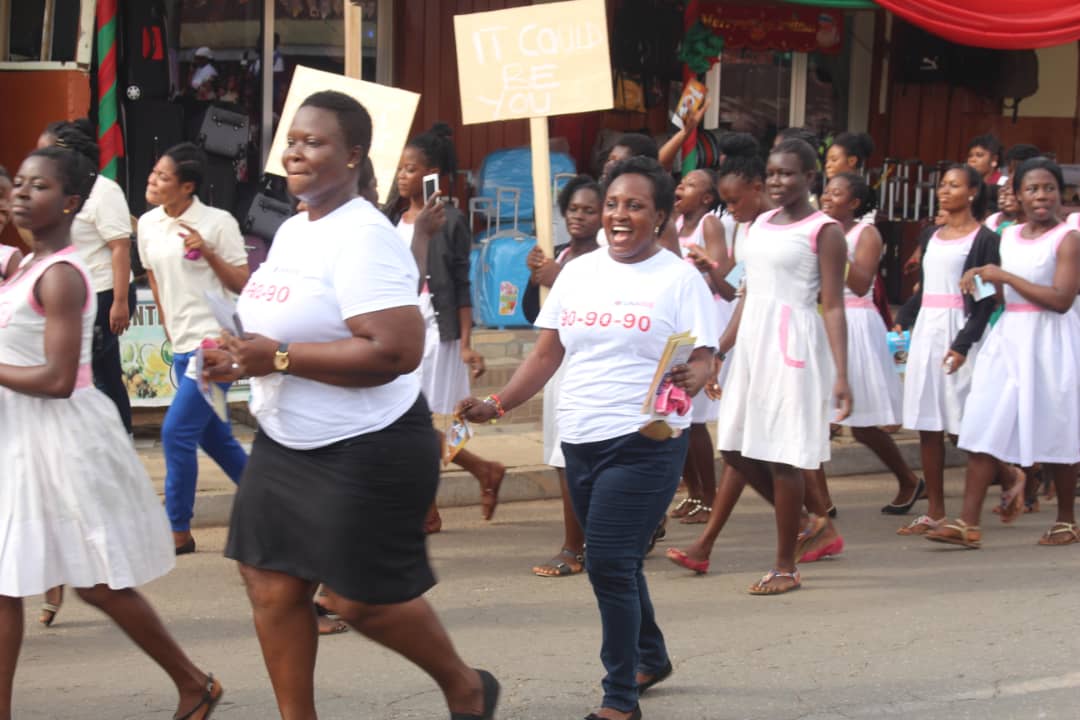 The program, which was held at the Obuasi Central Business District saw Heads of Department from Obuasi East District Assembly and Obuasi Municipal Assembly, staff of A.G.A Health Foundation, Tailors Association, Students from College of Integrated HealthCare and Obuasi Secondary Technical, as well as some Assembly members and the general public all in attendance.

Before the commencement of the program under the theme “know your status” with Ghana’s sub-theme “Test, treat to suppress and stop new HIV Infection”, there was a major float in the principal streets of Obuasi involving stakeholders in the fight against HIV/AIDS, aimed at sensitizing the public of the existence of HIV/AIDS.

Mr. O.J.K Addae of A.G.A Health Foundation talked extensively about the history of HIV/AIDS which he revealed came into existence in 1981 through acts of homosexuality. 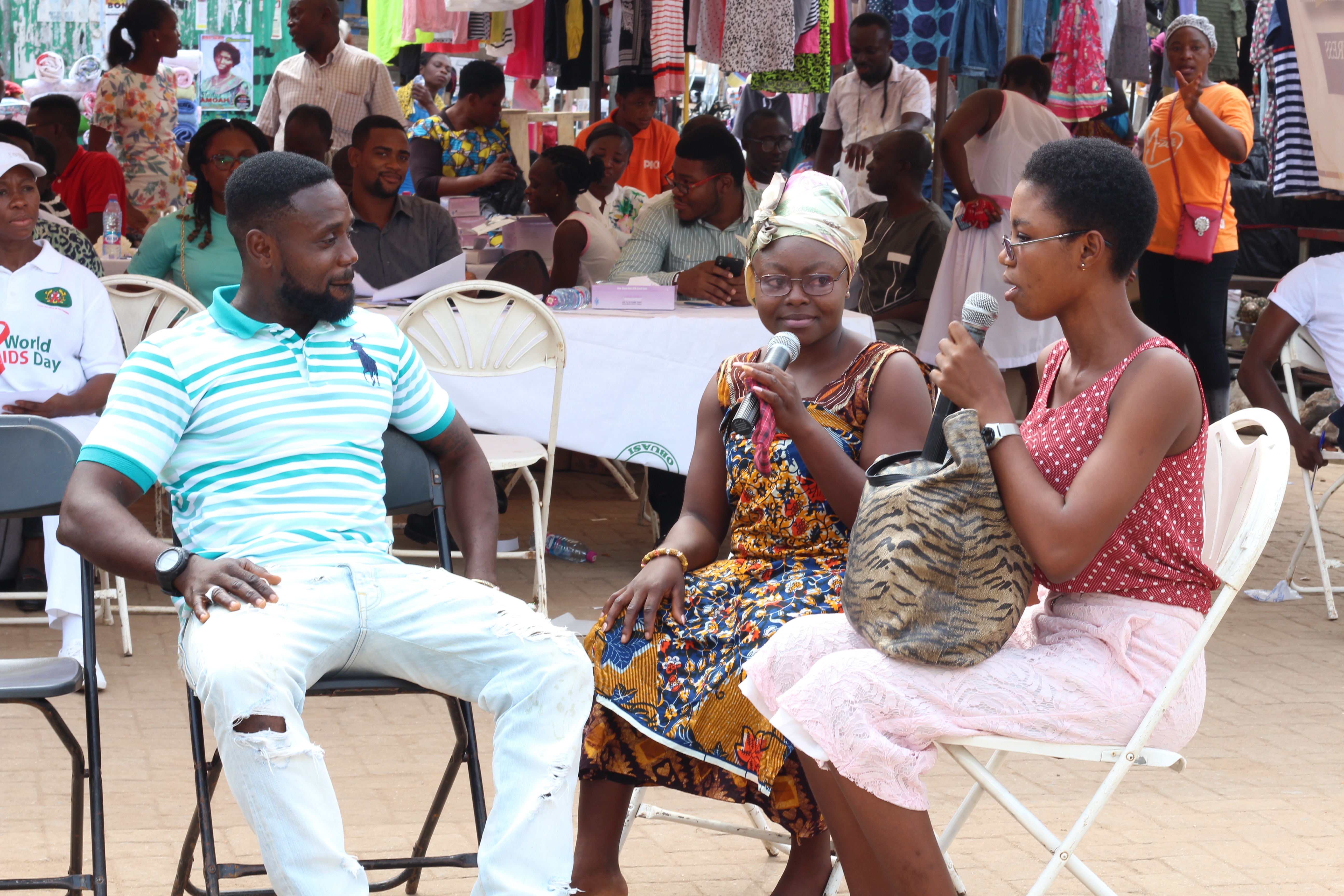 In an effort to mitigate the alarming rate of spread of HIV/AIDS, he sounded a word of caution to pregnant women to always attend antenatal care in order to prevent mother to child infections. He revealed that the Ghana AIDS Commission in collaboration with UNAIDS has signed a Memorandum of Understanding with the aim to sweep-off the existence of HIV/AIDS.

“The MOU will intensify sensitization to sustain medication by infected persons.”

Mr. Addae however noted that the union has put in place a measure called (Blood Safety) to prevent blood transfusion with an HIV contained blood.

About 500 people voluntarily availed themselves to be tested to know their HIV/AIDS status on the day in an exercise supervised by the AGA Health Foundation and the Obuasi Government Hospital.

He schooled participants on how to communicate to HIV victims to avoid stigmatization.

“Victims of HIV are all humans like us hence, they need to be given the maximum respect,” he said.

Honorable Elijah Adansi- Bonah, the Obuasi Municipal Chief Executive bewailed Obuasi’s position in the latest HIV/AIDS Sentinel report which ranks Obuasi on top of the whole country with a prevalence of 5.2%.

Hon. Elijah Adansi Bonah said Non-HIV victims should avoid discriminating and stigmatizing people living with the disease and rather draw them closer.

The Hon. MCE pointed out that “we do not acquire the virus through sex only but other related acts that we may not know hence we need to be cautious.”

He further urged NGO’S and individuals to promote the fight against HIV/AIDS in Obuasi.

In conclusion, Hon. Elijah Adansi Bonah entreated youth in Obuasi to abstain from premarital sex, or be faithful to their partners and practice safe sex through condom use.