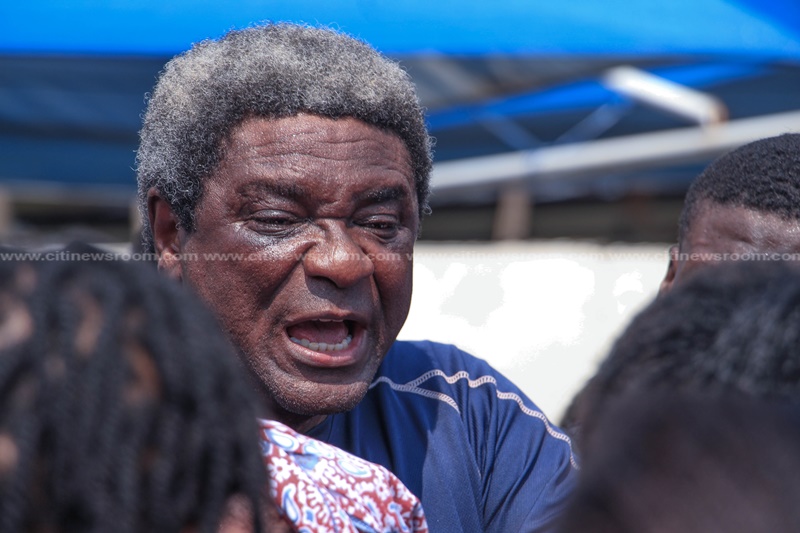 A protest by some students of the Ghana Institute of Journalism [GIJ] on Sunday, has led to the cancellation of two papers in the school’s first semester exams for level 400 and Masters students.

The cancelled papers were to have taken place today  at 1:00pm and 4:00pm respectively. Citi News’ Jessica Ayorkor Aryee,  has learnt that a new date will be announced in the shortest possible time for them to be taken.

[contextly_sidebar id=”81NuridmZvOSlrIhQbILaDJ30eS27KMB”]The peaceful protest, which nearly turned chaotic, was against management for not allowing some students to take the exams over non-payment of fees in full.

The students, who were clad in red and black apparel, stormed the school’s campus and called for the immediate removal of the newly inducted rector of the institute, Professor Kwabena Kwansah-Aidoo.

But the General Secretary of the GIJ Students Representative Council (SRC), Naa Adoley Moffat, has called for calm, and assured students of the SRC’s commitment to ensure that cool heads prevail.

“The exams that have been cancelled have been rescheduled. I am pleading with you to go home and relax. We as SRC will do all we can to enable you write the exams.”

Management members of the Institute are reportedly in a closed-door meeting with leaders of the Students Representative Council (SRC) over the numerous issues raised by the aggrieved students.

GIJ students protest after being barred from writing exams over fees

The students who were protesting said they are being oppressed by the Rector, Professor Kwabena Kwamsah-Aidoo, and have thus threatened to take the law into their own hands.

Personnel from the Ghana Police Service were deployed to the school to maintain order, and calm down the tempers of the aggrieved students.

According to the school’s regulations, continuing students are supposed to pay at least 60% of their fees in the first semester before they will be allowed to register their courses and partake in the exams.

However, according to these students, despite paying nearly their fees in full, they were not allowed to write their papers.

Some were also prevented for their inability to register their courses online.

In recent times, students of tertiary institutions across the country are using demonstrations as a means of drumming home their demands after ‘fruitless’ internal arrangements.

Key among these protests is the violent demonstration at the Kwame Nkrumah University of Science Technology where several school properties were vandalized.

Last month, the SRC of the University of Ghana also threatened hold a demonstration to compel management address the challenges of shuttle services and the operationalization of power plants on campus.

But a day after the threat, the intended demonstration was indefinitely suspended after an assurance by management to address their concerns.

The distance education students of the University of Ghana also hinted of a demonstration to push the university authorities to improve the poor academic conditions they experience.

The Ashanti Regional Minister, Simon Osei Mensah, the Ashanti Regional Director of the Ghana Education Service and the Police, averted a planned protest by students of the Kumasi Technical Institute (KTI) over management’s decision to have students write their examination in dining halls instead of classrooms.