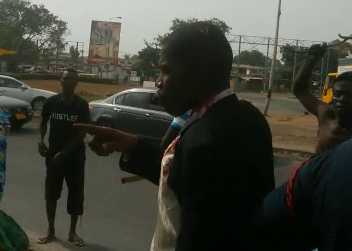 Francis Nabegmado in the grips of police after the murder

The man who killed the Senior Pastor of the Central Assemblies of God Church at Tema during a church service, has defended his actions alleging that the pastor, Rev. Dr. David Nabegmado, was a false preacher engaged in idol worship and human sacrifices.

Rev. Dr. David Nabegmado was killed by his nephew, Francis Nabegmado, who told journalists after his arrest that his uncle had tried to kill him several times in spiritual battles.

[contextly_sidebar id=”GedVzjj48x86QnK3Al3kF7iW91n4D5cp”]“My uncle is worshiping lesser gods. He is not a man of God. He has sacrificed all the family people and destroyed everybody” he alleged.

In his bizarre and incoherent account dating as far back as 2000, of what led him to kill his uncle eventually, Francis said he had to “had to go and bring these gods to the house to protect the house” because of his uncle’s purported actions.

He continued the human sacrifice claims saying his uncle “sacrificed the church members; two or three in the year.”

“The gods [after the Burkina Faso trip] told him to find okro with a red cock and slice and put at the roads’ end. So when he came back, he sent my senior brother who is a pastor Peter Nabegmado and Pastor Daniel Nuhu, who is the accomplice, to him and they now went to the village, and from there, they started to kill the family.”

“He [Rev. Dr. David Nabegmado] came to me physically with a pistol. He didn’t get me,” Francis also recalled.

According to Francis, his uncle turned his attention to one Musa from Kumbungu in the Northern Region for spiritual help, and he was given some gods.

“The gods are with him now. He chants money from it. It is a pot with a tail and an iron bar crossed with it. And that is what I came in for.”

Francis said he had made various attempts at dialogue to bring his uncle to order but to no avail.

He said this was why “today I decided to come with the knife.”

“The family called him to settle the issue. We went to the family three times, and he refused to come, then the rest of the family pulled out themselves, so I went to so many places. I even went in 2015, to Hitz FM to see Black Rasta to resolve this issue but to no avail.”

Meanwhile, other reports suggests that the suspect, who was living with his Uncle in his official minister’s residence, was engaged in idol worship, a situation that forced his Uncle to sack him after several warnings.

The murder incurred the wrath of some residents who appeared on the verge of lynching Francis when he was caught.

Videos from the scene of the arrest showed the suspect bleeding seriously from his head as a policeman tried to calm the angry men around, some of whom were striking the suspect with their hands and sticks.

“We have to kill him too. We have to also kill him. He has killed a pastor. He used a knife to stab him [the pastor],” one man is heard saying in audio from the scene.

Rev. Dr. David Nabegmado reportedly died few hours after being rushed to a nearby medical facility for treatment.

The Tema Regional Police Command has since begun investigations into the incident.

The police found on him a knife, a bottle of alcohol, turpentine and a matchbox. According to the suspect, he had wanted to retrieve a spiritual pot from his uncle so he could burn the same, but he couldn’t access it.

There are suggestions the suspect may be mentally unstable although that is yet to be proven or otherwise.

B5 Plus celebrates four business awards in 2018

B5 Plus celebrates four business awards in 2018