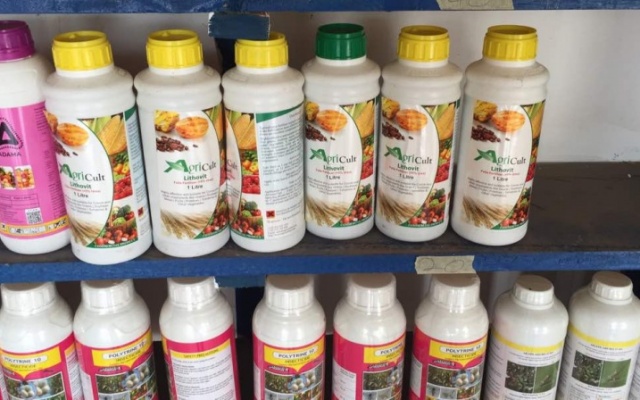 Mr. Benson Nutsukpui, the lead counsel for businessman, the Seidu Agongo in the GHS217 million Opuni-Agongo trial on Monday, 3 December 2018, demonstrated to the Accra High Court hearing the case that the chemical composition and scientific operation of Lithovit Foliar fertilizer, which is at the heart of the case, aided not only cocoa yield, but worked perfectly on vegetables and other plants too.

During his cross-examination of the state’s second prosecution witness, Dr. Alfred Arthur, Mr. Nutsukpui stated that available literature on Lithovit Foliar fertiliser indicates that it speeds up photosynthesis and releases a high concentration of Carbon Dioxide, which essentially stimulates growth in plants.

[contextly_sidebar id=”840FVu3cmk3L4haiwJit1QYZWlADnjJg”]Dr. Arthur agreed to that particular assertion and affirmed to the court that, indeed, that particular physicochemical reaction is what Lithovit Foliar fertilizer is well-known for.

He also affirmed that an activity called tribodynamic action, in which the particles of Lithovit Foliar fertilizer permeate into the stomata of the leaves, ignites the release of plant energy essential for growth.

As such, this quality of Lithovit Foliar fertilizer makes it essential not only for cocoa tree growth, but also for the growth of other plant species including vegetables.

Dr. Arthur again responded in the affirmative when Mr. Nutsukpui told the court that when Lithovit Foliar fertilizer is sprayed on leaves, it leaves a thin layer on the surface of the leaves which ensures the release of more plant energy to aid growth.

Here are excerpts of today’s proceedings:

Q. You gave some evidence that you did some reading on Lithovit.

Q. Did it also come to your attention while you were reading on Lithovit that it is not soluble in water?

A. No my lord. In all cases, Lithovit was recommended to be mixed with water at the point of application and in fact, the scientific adviser to Zeovita GMBH, Prof. Dr. Bilal in 2010 recommended Lithovit to be applied at the rate of 500g in 100 litres of water.

Q. So, is it your position that Lithovit is soluble in water?

Q. I am putting it to you that all scientific evidence indicates that Lithovit is not soluble in water.

A. As I indicated to the court earlier, work done on Lithovit here in Ghana by Prof Nkansah and Prof Owusu, both at the University of Ghana, clearly stated that Lithovit foliar fertilizer was mixed with water at the point of application. The client of that work was Agricult Ghana Limited and the report is dated December 2013

Q. And you have the report?

Q. You can bring it at the next sitting?

A. I can’t promise but I will look for it.

Q. When we say something is soluble in water, it means it dissolves in water.

Q. And is it your position that Profs Nkansah and Owusu stated that Lithovit is soluble in water?

Q. Are you deducing from the treatment or Profs Nkansah and Owusu stated that Lithovit is soluble in water?

A. My lord, I am deducing from the treatment and also from the scientific advisor to Zeovita GMBH, manufacturers of the Lithovit foliar fertiliser.

A. What I am quoting is from the scientific advisor to Zeovita and not Zeovita as a company.

Q. It is true that when Lithovit is sprayed on the leaves, it leaves particles size smaller than stomata openings on the leaves.

Q. It is also true that its particles penetrate through to the stomata to the intercellular compartment?

Q. It is also true that that action creates a physicochemical reaction at the cell membrane releasing Carbon Dioxide at high concentration?

A. That is correct and, in fact, that is the main function of the powdery Lithovit Foliar fertiliser and not by inducing flowering.

Q. As a result of the physicochemical reaction, photosynthesis is greatly enhanced.

Q. Do you know what is called tribodynamic action?

Q. That is the effective action that Lithovit ignites in the plant.

Q. And that increases the energy converted from the particles.

Q. It is true that when Lithovit is sprayed as a suspension on the leaves, a considerable portion of it remains in a thin layer on the leaf’s surface.

Q. Indeed, it is also true that there are 2 mechanisms by which Carbon Dioxide is released from Lithovit.

Q. You will agree with me that if the particles were soluble in water, the solution cannot form a thin layer.

A. Not entirely so.

Former Ghana Cocoa Board (COCOOD) CEO, Dr. Stephen Opuni as well as Mr. Agongo, and Agricult, are facing 27 charges of willfully causing financial loss of GHS217 million to the state, through three separate fertiliser supply contracts between 2014 and 2016.

According to the charges, the consignments of Lithovit Foliar were produced locally, contrary to an agreement between COCOBOD and Agricult Ghana Company Limited that it be sourced from Germany.

Also, the Attorney General claims the fertilisers were manufactured without registration, thereby, flouting the Plants and Fertiliser Act 2010.

Justice C.Y. Honyenugah, a Court of Appeal Judge is sitting on the case as an additional High Court Judge.