A visit to the grotto of Sainte Baume; a tourist’s experience [Article] 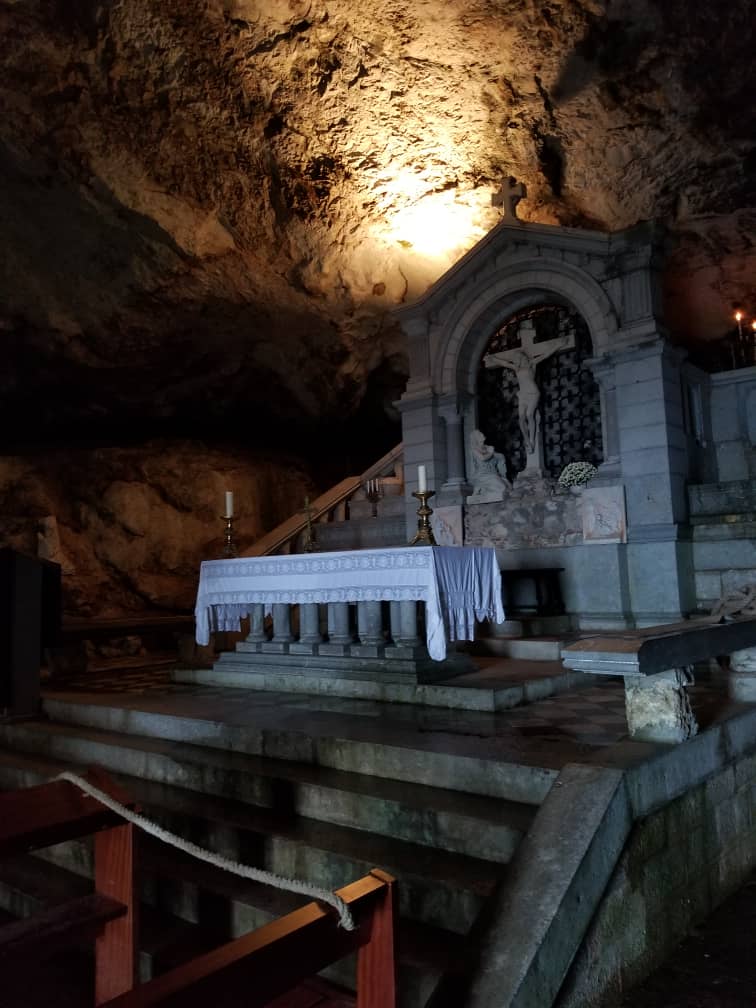 It was more than an hour’s drive from the hotel. Our hearts were set on the pilgrimage to the cave on the mount of Sainte Baume in Marseille, France. This is where the best friend of our Lord Jesus had dwelt making intercession in fellowship with our risen Lord for 30 years before she was laid to rest. 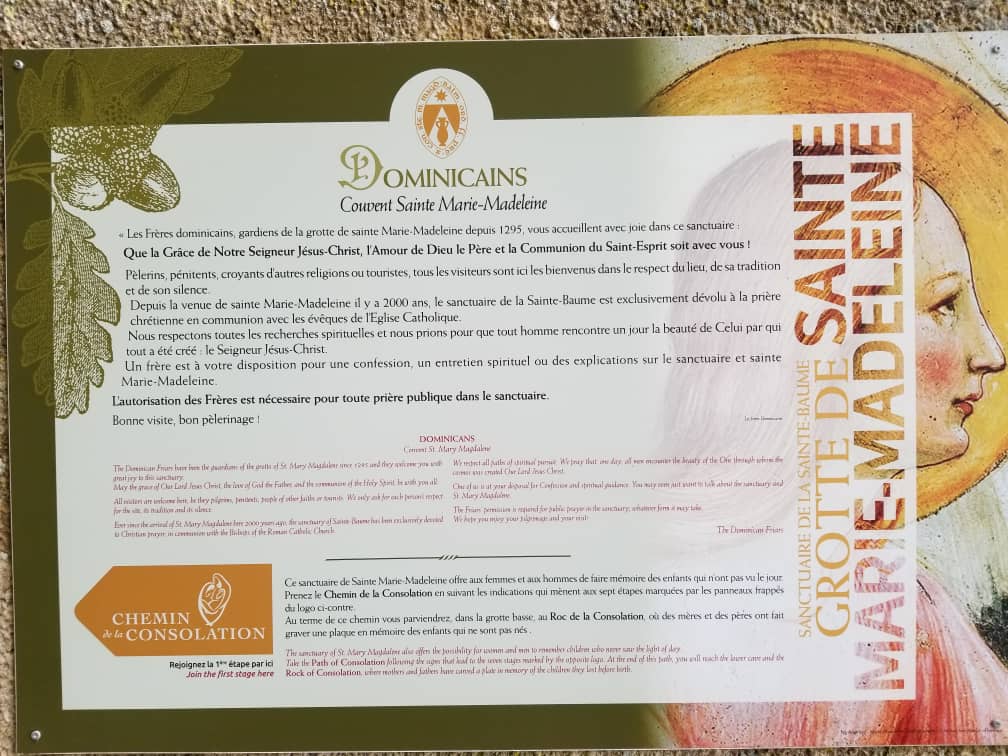 This was La Grotte de St. Marie Madaleine (The Grotto of Mary Magdalene): The blessed maid; the most loved who sat next to the Lord at supper; the anointed one who anointed and wiped His feet with her hair before His crucifixion; the first person to whom He chose to reveal Himself after His resurrection; first apostle of the Resurrection; apostle to the apostles; the obscure 13th who ‘understood’ better than the rest. 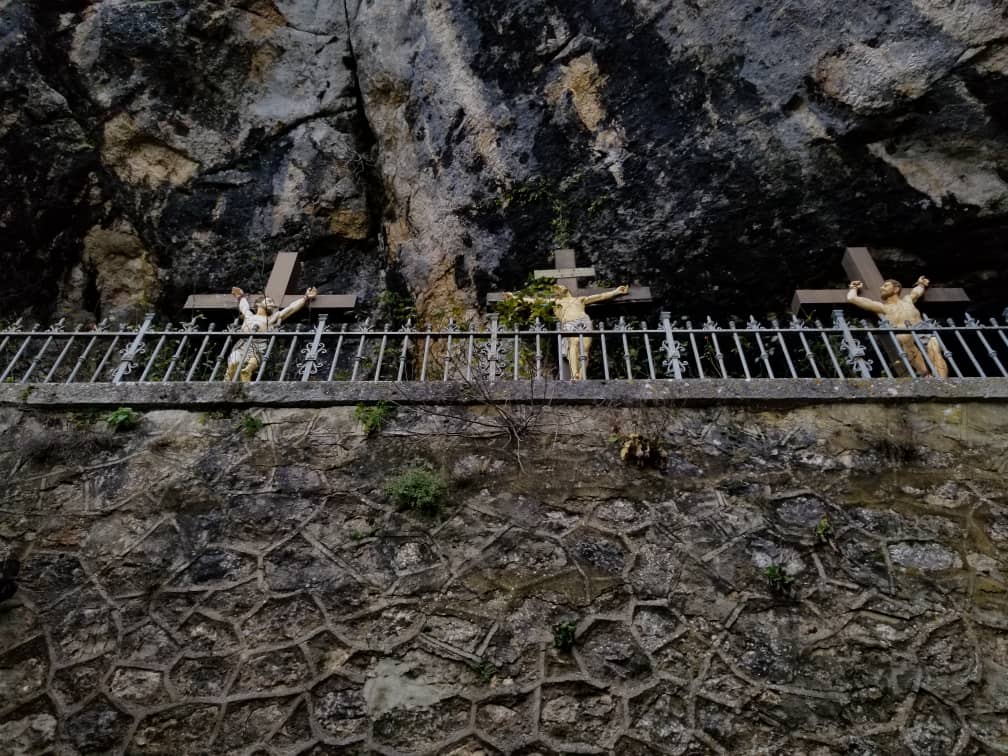 She was never a prostitute as erroneously taught by the church. Rather, she had been delivered from seven demons by the Lord Jesus. Mary was the sister of Martha and Lazarus, all beloved friends of Jesus, but she was the most beloved confidante of Christ. A love relationship that was incorruptible and unblemished.

But it was a stormy day at Sainte Baume when we arrived, and an officer at the Hostellerie at the foot of the mount said she feared we might get lost in the forest because of the fog and rain. Yes, the grey mountain was covered in mist and looked fearsome. It reminded me of ‘The Secret Mountain’, one of Enid Blyton’s Famous Five series. The officer told me my flat shoes were inappropriate for the terrain, and advised me to wear Wellington boots or sneakers next time. So we left with intention to return the next day. After all, we had three more days to go. 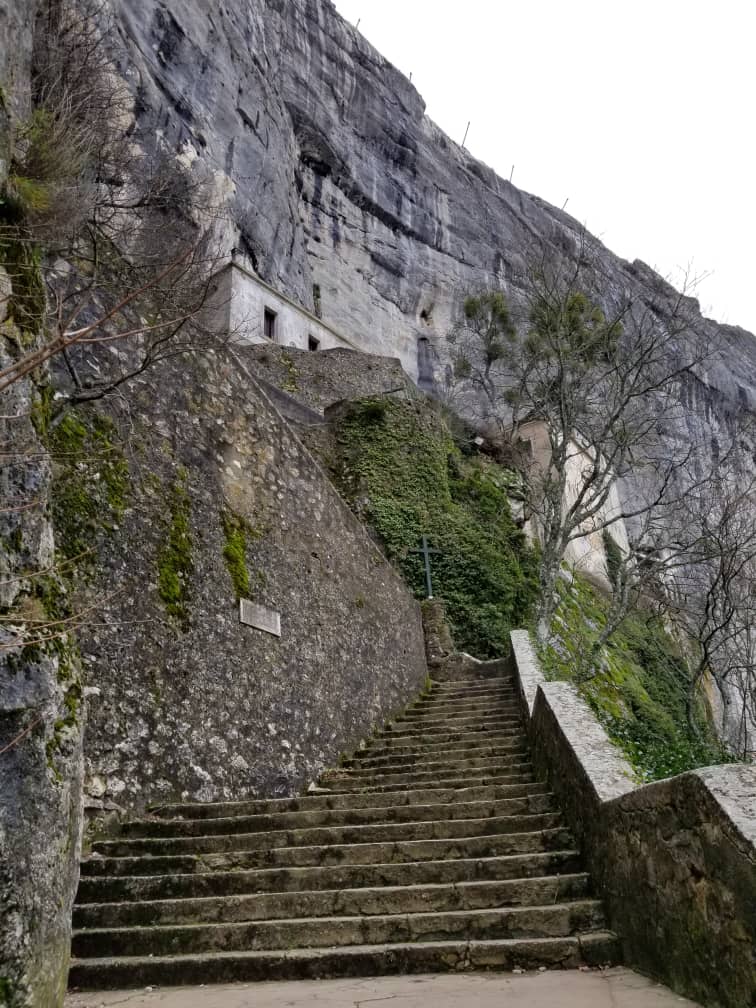 However, the next day my companion fell ill, and was still the following day not well enough for the adventure. But my heart, resolutely set on pilgrimage would not stop short of the goal. Determined, I returned to Sainte Baume alone two days later. 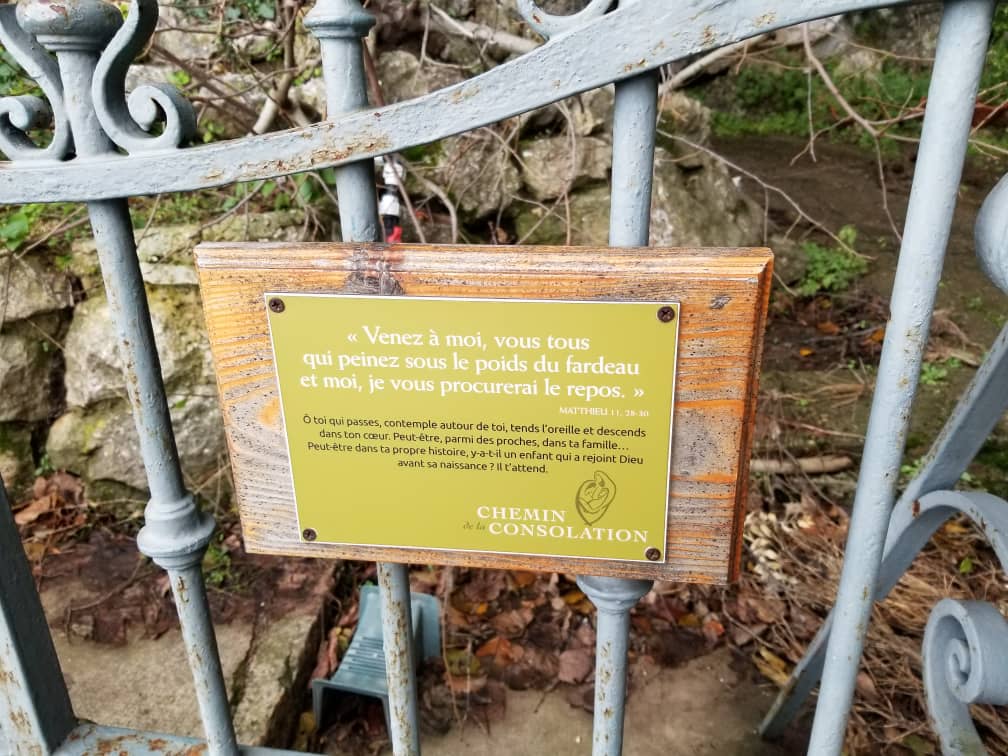 As I entered the forest, my heart beat louder and faster. Adrenaline rushed down, and my legs shifted gear to a trot. I ran down the pathway till it forked in two. With no signage, and alone in the forest, I kept to the right, and walked uneasily up. But after about ten minutes I realized I had dropped my glove so I returned to find it. There it lay at the intersection. As I bent to pick it up, the rugged path to the left beckoned invitingly. I watched a quiet stream trickle down the muddy ground, and listened earnestly. 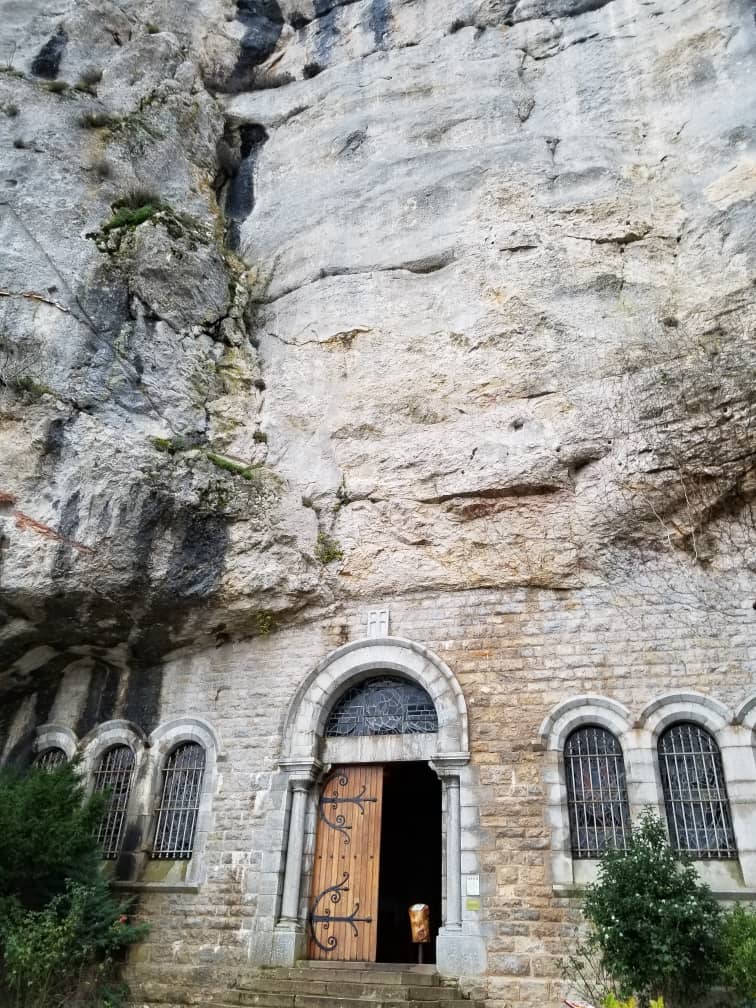 “The map,” I heard. Oh yes, I had a map in my strapped satchel. As I studied the map I realized my driver had dropped me about 300 meters to the right of Chemin de Roys, the designated way. So I obliged the left path, and walked gingerly along until I arrived at a beautiful jade stone pillar mounted by pilgrims from Jerusalem, who etched into it a message that declared the area holy ground.

Anxiously, I began my ascent up the mountainous path. The forest was alluring and friendly, but the only signage to guide me were small white, blue, yellow, or red strips of paint on the trunks of large trees. At times my knees wobbled and my chest hurt so badly I thought I just might collapse and die. I slowed down and took Norvasc (heart medicine). Then I met two men and we spoke briefly. They explained the route up, and encouraged me with gentle cheers of “bon courage”. I sat on a stone and rested about 3 minutes and trudged on. 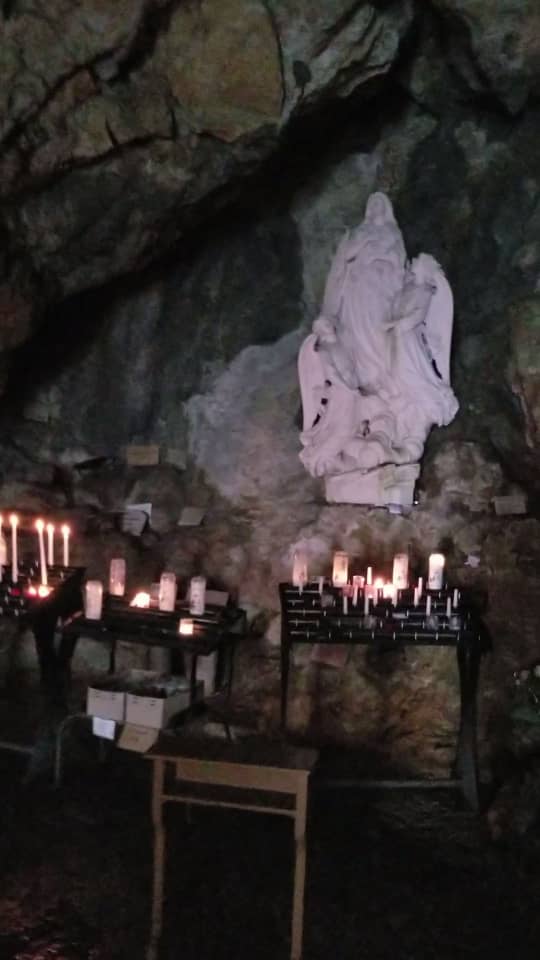 I was panting heavily when I reached the top an hour later, and felt exceedingly grateful as I lumbered up a concrete pavement that led to the cave. A display of the crucifixion had been mounted along the side of the pavement, where at the foot of the cross Mary the mother of Christ and Mary Magdalene knelt. I marvelled at headless statuettes of the faithful women who had evangelised tirelessly with Mary and died as a result of their faith: the silent martyrs. The tower clock struck three as I entered the cave.

The energy in the cave was at once soothing and solemn. It was quiet and dark-lit with lanterns, sombre lights and candles. I saw pews to the left of the entrance. There were statues of Jesus, Mother Mary, Joseph and Mary Magdalene neatly situated at various corners. I walked down the wooden stairs that led to a basement. At the farthest corner, an elderly French couple were praying in front of a figure of Saint Mary Magdalene. Respectfully, I moved away towards the centre to allow them privacy. At the centre, a simple stone-carved alter stood against a wall, and all around I could hear the softest flow of water like heavenly whispers of His majesty. In that sacred moment I sighed deeply in awe. I knelt down and my soul crumbled in worship, as I sobbed heavily and silently from the depths of my being without measure. Then I rose up, placed my requests at the Alter, and gave thanks.

After that, I flipped out my phone, took pictures and left in complete satisfaction. The clock struck four. Overjoyed, I remembered I was paying my driver by the hour. With a burst of renewed energy, I ran mostly down the wet mountain to the waiting vehicle, and slept all the way back to the hotel in perfect peace.

One village one dam commences in Nadowli-Kaleo districts