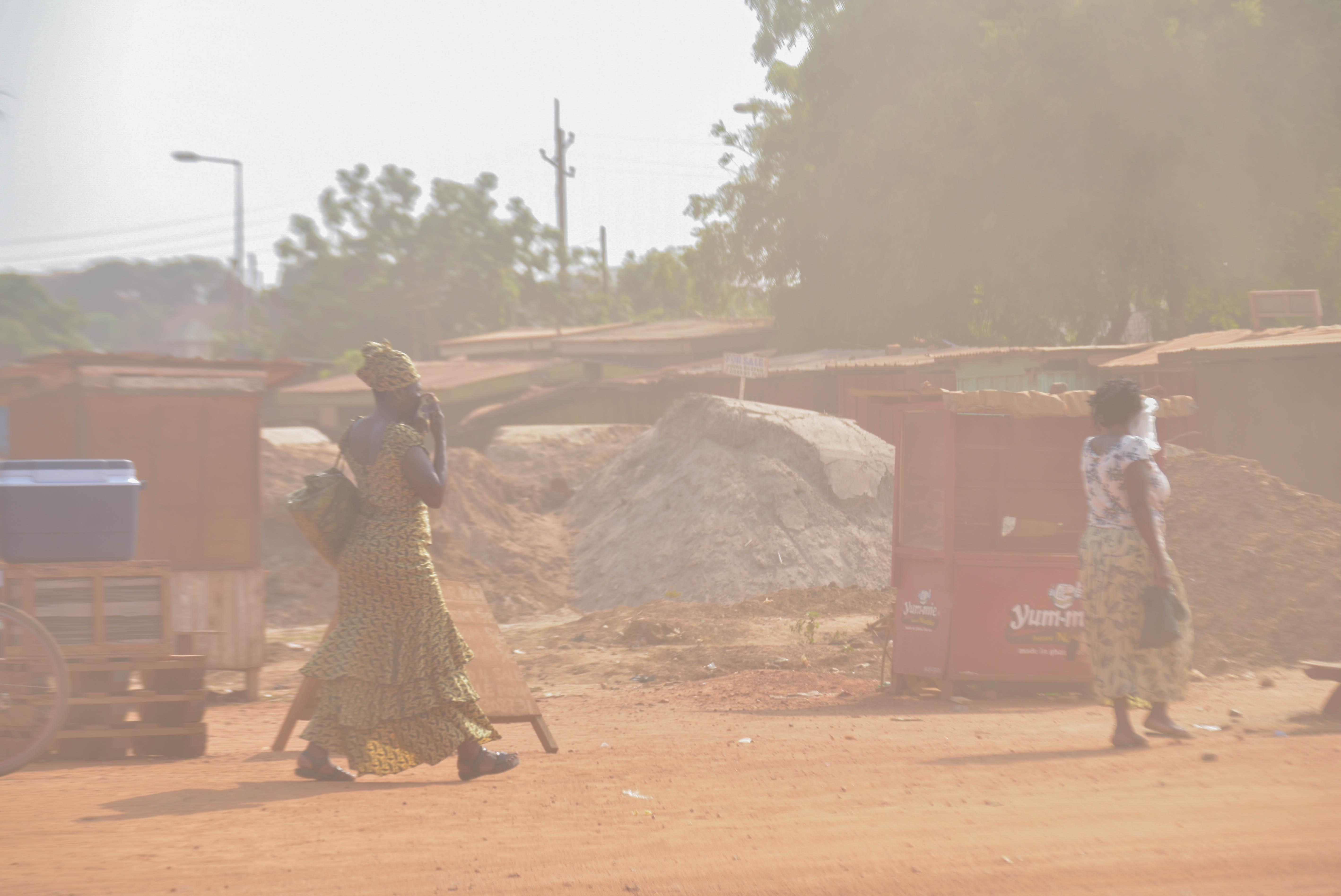 In November 2018, some residents of Teshie Tsuibleoo made a noble attempt to shake the table by demanding that work on the Teshie-Spintex road be completed. On any other weekend, the agitations would have probably fallen on deaf ears. But the earlier fortnight of tragedy and anger at deaths on the Madina-Adenta highway, meant even whispers about road protests had the government on edge.

So the state reacted. Within days, a section of the 7.5km road had been scraped clean, like the head of a man trying to hide his receded hairline. A morsel of hope was flung the way of the community, of which I am part of. Full works were to start, we were told.

I kept my expectations in check. Not even the threat of losing an election forced significant action on that stretch in 2016. Indeed, that scar of a road can be a poisoned chalice for legislators.

The government response to the protest in November was a small half measure, like many we have endured for what feels like an eternity. The Teshie-Spintex road has become synonymous with disappointment and neglect over the years, but there was something different this time around that reinforced its position as one of many totems of dysfunction in Ghana – the excessive dust.

Yes, one could argue there may be more important things to complain about. In the same area, there is a quiet sense of insecurity, and there are probably not enough beds and overworked nurses in the nearby LEKMA hospital. But the clouds of dust residents and workers in the area have had to endure seems to be rubbing salt in the wounds inflicted by the same state we cry to.

Why has the dust become a problem? Well, after the Teshie-Spintex road was scraped, smoothening out the rough surface, drivers had a formula one track to play with. This is especially so for the troski drivers who drag race in competition for passengers on the stretch between the LEKMA hospital and the junction that eventually leads one to the Burma Camp bypass. 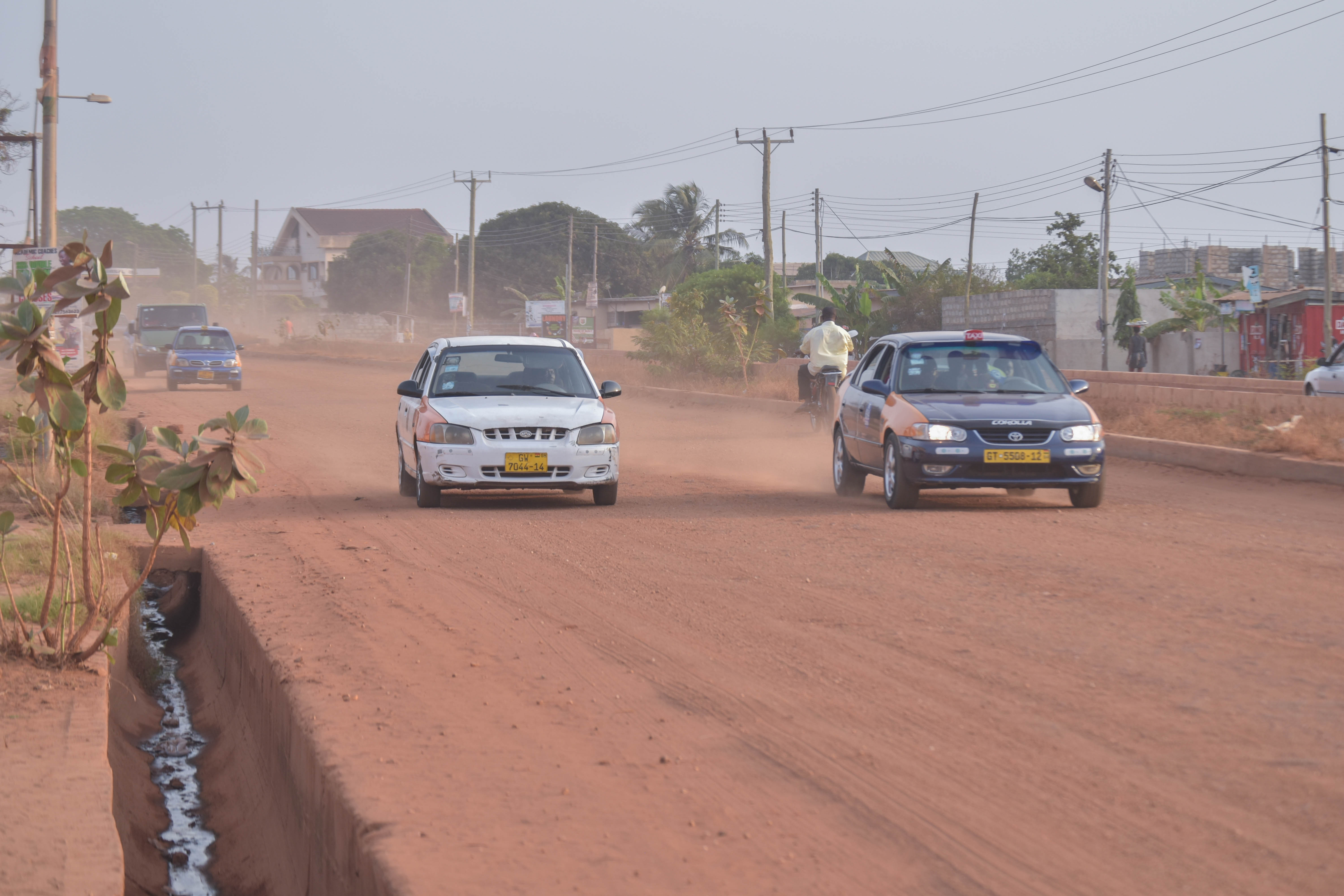 Kojo Baah, like many others, now longs for the days when the roads were more of a problem for cars than passers-by. “It was way better with potholes because with the pothole-ridden road, the cars were not speeding like this and creating the dust.”

James, a senior citizen who runs a wholesale agreed with him. “[The dust] is creating a lot of nuisance. [The road] used to be potholed. At that time the drivers actually slowed down, but now that it has been levelled, it easy to speed on it.”

The stretch of the Teshie-Spintex road beyond the LEKMA hospital, heading towards Spintex has been an eyesore for years – sometimes literally, because of the grains of dust that sting one’s eyeballs. In the area where I spend most of my time on foot; whether looking for some kenkey to buy or waiting for a Circle bound troski, I see people smothering themselves with handkerchiefs. I see sunlight fighting with the dust for space on clothes hanging on drying lines. I see food on the roadside being garnished with brown spices gifted by the harmattan. Quietly troubling, I also see businesses struggling.

I remember the last time I visited the car wash that is some 400 meters from the LEKMA hospital. It was early in 2017. I took the family’s aged navy-blue car for a good clean like I had done a fair amount of times before. As I sat a few metres away mulling over how much I was going to tip the boy making an honest living, I first noticed how devoid of activity the place was. This was a Saturday.

As I walked up to pay for the service, it was hard to miss the specs of dust landing on the body of the car like bees turning in for the night as cars sped by. My eyes met the boy, and he smiled sheepishly, dabbing the car with his duster with the fortitude of a plumber trying to seal a burst pipe with balls of tissue.

Long story short; the car arrived home a mix of blue and red. And I felt sorry for the car wash business. Other drivers certainly went through that same experience. Like me, many of them never returned.

Two years later, that car wash still stands on the shaky hope of politicians’ promises. There is some grace in the idea of the owner of the car wash persevering, but he told me things were at rock bottom.

“Because of the dust [my business is failing] and you know, washing bays, you can’t wash your car, and the car will be dusty,” Emmanuel Ablor, the owner of the car wash remarked.

That said, for him, closing the shop and moving the business away is not an option.

“How can you move away? You can’t move away. So, we are waiting for the government. They said they are coming to tar it.”

Ghanaians have proven they can tolerate buying things in areas overcome with a foul stench. But not everyone is forgiving of wares that are sold amidst showers of dust, as Mimi Adjei, a vegetable vendor by the roadside notes.

“When you set up your market all the things will be dirty… look at my dress. Look at me; how I am dirty. It as if I don’t even know what I am doing. Because of the dust, people cannot even stand to buy.”

Mimi measures her sales by the number of boxes of vegetables she sells, which was formerly a box every two days, but now she says, “this time, the whole week you sell one box.”

She too has considered moving “but where to go now?” she retorted.

You cannot fault these people for feeling like the previous road’s state; narrow and manhole ridden, was way better for the community. Ahead of the 2016 election, the expansion of the stretch made its way to our area and a second road was created in line with what I  assume are plans for a dual carriageway on the entire stretch. Of course, that too was a half measure which brought its own forms of discomfort.

As the 2016 election drew near, Umaru Sanda Amadu interviewed then MP for Ledzokuku, Benita Sena Okity-Duah, and the Teshie-Spintex road came up in hilarious fashion. She was taking final gulps of the poisoned chalice and promptly lost the election to Dr. Okoe Boye. But the value is the same with the MPs, as far as the road is concerned. Complaints have also been made to the Assemblyman who has been toeing the government’s rhetoric on the roads.

It has been said that everything in Ghana will kill us. Hyperbole or not, the dust isn’t doing our health any favours. Not to turn this into a post on the health effects of dust, but I am yet to come by any article or research that says inhaling dust is a bonus for our life spans.

The large dust particles, the easiest to notice, obviously irritate the nose, throat and eyes. I now carry shades to protect my eyes when walking along the road or even sitting in a troski. As for protecting my lungs, my palm does the trick. 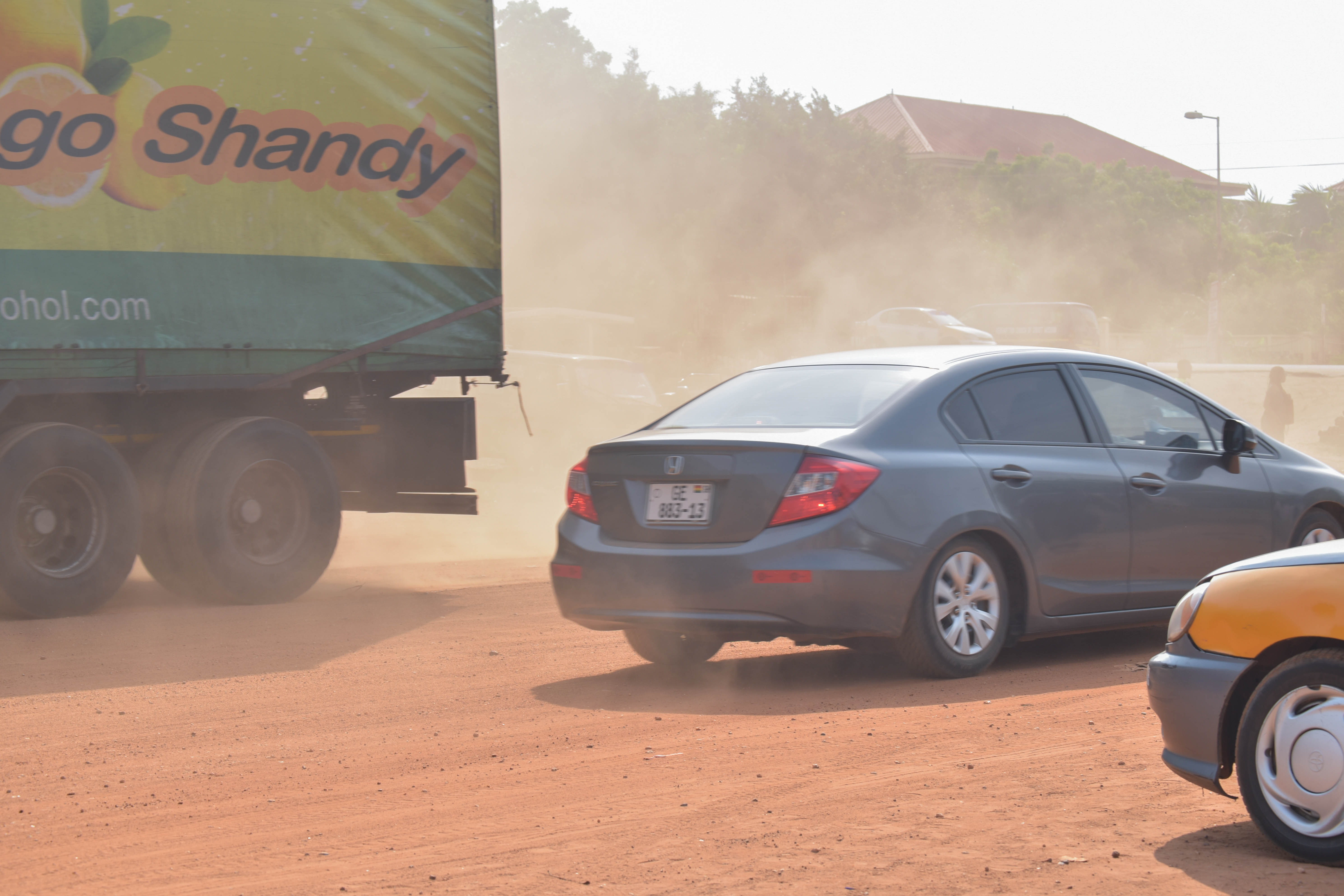 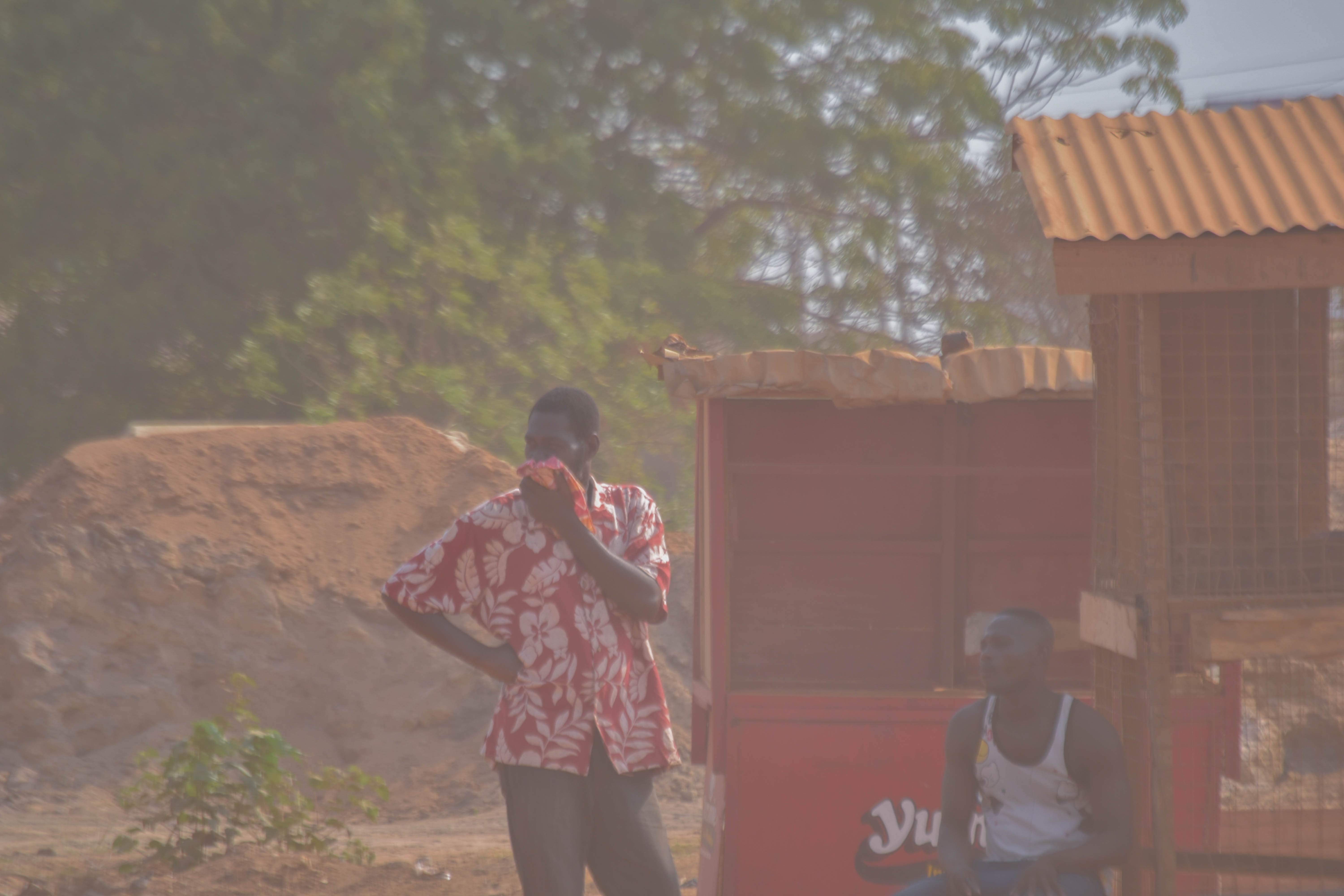 The microscopic dust particles are the real killers – real bad news for the lungs. Long-term exposure to high concentrations of dust is said to reduce lung function and even contribute to the likelihood of suffering from respiratory and heart disorders. I worry that some people are too used to the dust and in line for a major health shock some years down the line.

What I noted in my walk around was a sense of resignation and helplessness. Some of us are just waiting for the first rainfall to mess the road up and end the latest season of Teshie Formula One. Outside the protests in November, we’ve pretty much suffered in silence. The Ledzokuku MP, Dr. Bernard Okoe Boye told me he has been calming tempers in the background, but he said a storm might be coming.

But said he might not be able to restrain the residents if the government does not keep the latest promise to complete Teshie-Spintex road.

“I have given myself to the end of the first quarter. If by the first quarter we don’t see results, all I can say is that it may be difficult to still keep my people as calm as they are. I have kept them calm for a long time… if you traditionally know my people, I don’t think those in Adenta are more aggressive than my people. If you talk about aggression and being wild, those in Adenta don’t come anywhere near those in Teshie,” the MP said.