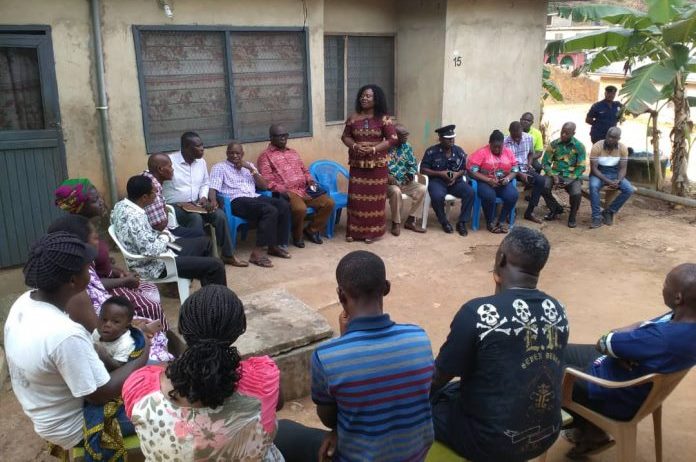 File photo: The CID boss meeting with families of kidnapped girls in January 2019

Police in Ghana are seeking the assistance of experts from the United States of America and the United Kingdom to help find some three girls allegedly kidnapped in Takoradi in the Western Region.

Director General of the CID, DCOP Mrs. Maame Yaa Tiwaa Addo- Danquah told families of the kidnapped girls when she visited on Saturday that the President had instructed the Inspector General of Police (IGP) to prioritize investigations into the issue.

She added that the IGP is also soliciting assistance from professionals in the US and the UK to help in the investigations.

The last few weeks has seen reports of kidnapping in the country mostly involving young girls.

The three reported kidnapping incidents in the Western Region have triggered a social media campaign by Ghanaians urging the police to be more aggressive in finding the missing girls.

Another report was made in the Volta Region this week involving a 17-year-old girl.

An aunt of the 17-year old student Sonrise Christian High School, Ms. Beatrice Dzorvakpor, reported to the Ho Police command the case of her missing niece on Monday, January 21, and presented evidence of a Whatsapp conversation between her and someone else using her niece’s phone who did not demand a ransom.

The victim was later found after the kidnapper dropped her off at Aflao, from where she could locate a friend.

DCOP Maame Yaa Tiwaa Addo- Danquah, together with the top hierarchy of the Western Regional Police Command on Saturday visited the families of the three kidnapped girls in separate meetings in Takoradi.

The CID boss said the investigative team has been beefed up and assured the families of intensified efforts to rescue the girls.

The Public Relations Officer of the Western Regional Police Command, DSP Olivia Adiku, who was part of the entourage said ‘’the police have been busy doing all they can to rescue the girls and also to prevent other kidnapping incidents.”