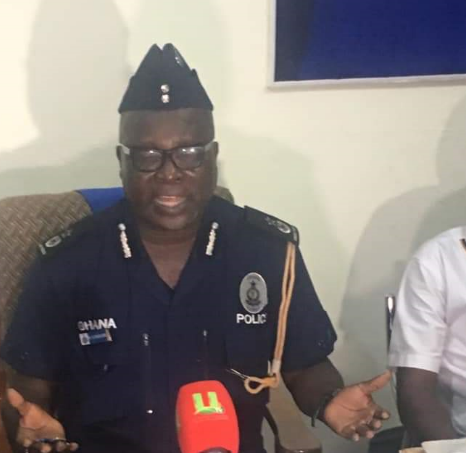 The Western Regional Police Commander, DCOP Redeemer Dedjoe, has said his office has picked up some new leads that could aid their investigations to find the three girls who were abducted in Takoradi.

The family of the victims have accused the Police of not doing enough to rescue the girls.

At a press conference on Wednesday, DCOP Dedjoe, however assured that the new leads picked up will help their rescue efforts.

“We have some information coming in and we are trying to work on it to see how best we can handle the case. Sometimes it is difficult to put these leads in public domain because as you are aware, the criminals are also listening to whatever we are doing so if you talk too much, it gives them that confidence to build more fence around themselves. As a result of that, I will appeal that we keep some of these things until we are fortunate to come out with what we are actually looking for.”

[contextly_sidebar id=”d5i8JFPVxuulKQNcE2F8HGxdwzDwuJ1r”]He added that there is no cause for the public to live in fear since tracking of communications on the Nigerian suspect’s phone shows that he had some level of growing relationship with the kidnapped victims with promises of giving them phones and jobs.

DCOP Dedjoe thus asked the public to stay calm and be wary of invitations from unknown persons.

Meanwhile, the Minister for Gender, Children and Social Protection, Cynthia Morrison, has called on the family of the victims to stay calm, as the Police works to rescue the girls.

“Already, the families of the kidnapped girls are agitated. All we are praying for is that we get our girls back… As at now, we do not know what is happening to them.I pray they will not be molested. They [families] have started agitating but I asked them to calm down…”

Citi News reported the disappearance of the girls believed to have been kidnapped by one Nigerian, Samuel Udoetuk Wills.

The disappearance of the first victim was reported in August 2018, and the two others took place in December.

Samuel Udoetuk Wills was arrested but broke jail and escaped, and was later rearrested at Nkroful near Takoradi.

The family of Ruth Love Quayson, one of the kidnapped girls said they are still traumatized despite the re-arrest of the suspect, Samuel Udoetuk Wills.

Awuradjoa Quayson, a sister to one of the missing girls – Ruth, said her sister’s disappearance is affecting her family.

“Even when your child is sick, imagine the trauma you go through as a parent. How much more kidnapping? My mother has not been able to sleep from the very day the kidnapper escaped from the cells.”

“It has not been easy for the past one month, knowing that, our relative is there, but you are not hearing from her. You can’t even tell whether she has eaten or not,” she added.

May your enskinment bring peace, development – Togbi Sri to Yaa-Naa

May your enskinment bring peace, development - Togbi Sri to Yaa-Naa