A six-member delegation from Akron-City, the fifth largest city in Ohio, US and a sister-city of the Accra Metropolitan Assembly (AMA), has paid a courtesy call on the Mayor of Accra, Mohammed Adjei Sowah.

The maiden visit was to deepen the relationship between the two cities and to promote local businesses, industry associations, financial institutions, the chamber of commerce organisations, public schools and universities, among others.

The delegation also held a Business Summit with some ministries, the Association of Ghana Industries, the Ghana Investment Promotion Centre, the Ghana National Chamber of Commerce and Industry (GNCCI), and other private sector actors on how to promote businesses, as well as trade and investment among other businesses.

At a business meeting in Accra, Mr. Deshazior urged companies and entrepreneurs in the country, especially in the AMA area to link-up with businesses in Akron-City for mutual benefit.

He envisaged that the link-up would increase development opportunities, alternatives, solutions and assistance to meet the specific needs and goals that can develop and expand business opportunities in the country.

“This comprehensive approach will enable the two cities to provide and promote businesses with economic development solutions that are unique and tailored to our needs.”

Mr. Deshazior encouraged entrepreneurs and start-up business companies that the Akron-City has a good transportation network in North America which includes air, rail, highway and waterway routes that ensures that new businesses were given the opportunity for growth.

He stressed that Akron-City has enough fresh water, a reliable supply of natural gas, electricity and high-speed broadband internet access to expedite business transactions and a conducive environment for commercial activities.

“Cluster Industries underpin the economic success of Akron-City and ensures that new businesses are given every opportunity for growth.”

The Akron-City Deputy Mayor in-charge of Economic Planning Department said a recent study by the U.S Conference of Mayors revealed that the Akron-City has the 78th largest economy in the United States as its the gross metropolitan product was over $34.2 billion in 2016.

He urged the various businesses and entrepreneurs in the AMA area and country at large, to relocate their commercial activities to the Akron-City as it remains a place where product innovations and goods were now manufactured for the world markets. 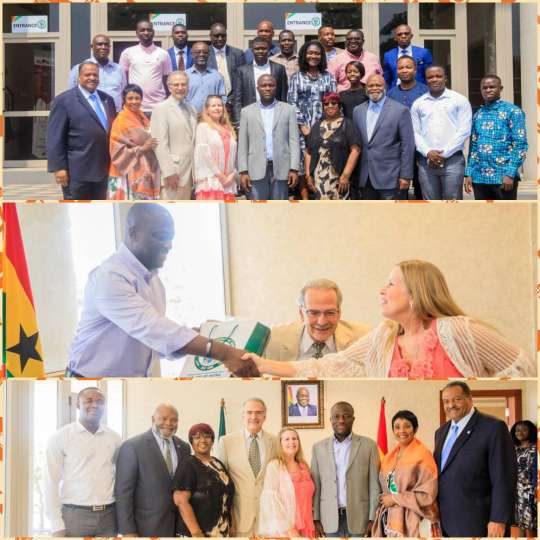 Mr. Frederick Adu-Amoako, the Chief Operations Manager of GNCCI, said the collaboration between the private sector, government and international partners was required for sustainable economic growth, as it promotes economic growth and reduces poverty through the provision of employment opportunities and a better standard of living.

He said Ghana had a vibrant private sector which employs about 86 percent of the total number of people within the non-household establishments.

Mr. Adu-Amoako said there was a high level of optimism and renewed hope that the private sector in the country will achieve significant sustainable growth, especially through the Ghana Beyond Aid agenda initiated by government.

He said the government of Ghana had committed itself to improving the business environment by undertaking some reforms and providing stimulus packages towards making businesses lucrative and competitive.

Mr. Moses Quarshie, the Business Development Manager of the AMA, on behalf of the Mayor, commended them for the visit and their efforts to promote development through education, health, local economic development and tourism in the AMA area.

He stressed the need for stronger cooperation among the two cities for their mutual benefit.

The Akron-City and AMA sister-city relations agreement was signed in 2015.