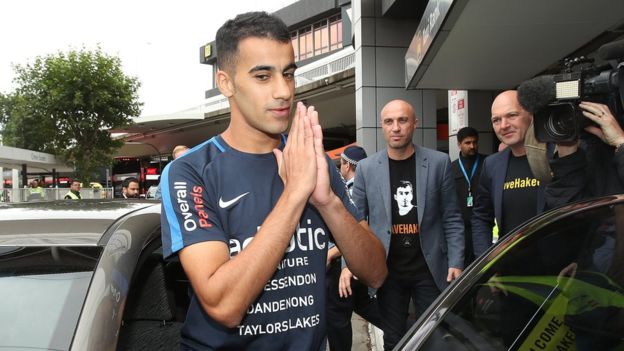 Refugee footballer Hakeem al-Araibi has returned home to Australia after two months of detention in Thailand.

The Bahraini citizen was detained in Bangkok in November while on honeymoon, at the request of Bahrain authorities.

Hundreds of supporters cheered the arrival of the 25-year-old footballer at Melbourne Airport on Tuesday.

Wearing his team’s football jersey, al-Araibi told the crowd: “I would like to say thanks to Australia. It’s amazing to see all of the people here and all of the Australian people who supported me.”

The professional footballer and vocal critic of Bahrain authorities had fled to Australia in 2014 where he was granted political asylum.

Bahrain had sentenced him in absentia to 10 years for vandalising a police station, charges which he has denied.

The Arab kingdom had sought his extradition, but human rights groups warned that he risked torture if he was sent back.

Hours before his return, his wife told the BBC she was deeply thankful for the lobbying efforts of the Australian government and public, and the international football community.

“I have had a smile all the time on my face and I can’t stop crying – I am just so happy,” said the 24-year-old, who does not wish to be named.

“I prayed and prayed that he would come back to me, and finally our nightmare is ending.”