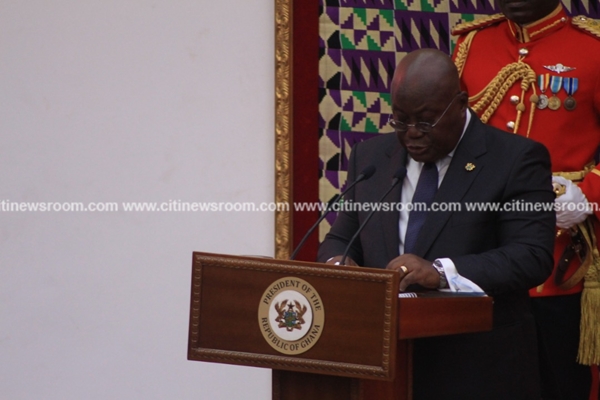 President Nana Addo has said the desire for praise or titles did not motivate his decision to end the protracted Dagbon conflict.

The President made this known while delivering his third State of the Nation Address in Parliament on Thursday.

“I was not looking to be accorded any special title or accolade, and I was certainly not looking for praise. I did want to do whatever I could to make sure that this long-running sore that was such a blight on Dagbon and Ghana which dragged down the development process in our country could be resolved and we could move on,” said the President.

According to him, the move is aimed at solidifying the peace and unity achieved in Dagbon this year [2019].

The President stressed that this will be the first time in the country’s history the anniversary will be held outside Accra.

“In order to reinforce and support the process of reconciliation and the restoration of peace in Dagbon, I have decided that this year, the 62nd Independence Day celebration will be held in Tamale on 6th March,” he said.

Yaa-Naa Yakubu Andani II was dismembered, and his head paraded on a spear after the killing with shocked the country.

The funeral of the late Yaa-Naa Yakubu Andani II was held on Friday, January 18, 2019, with the then Yoo Naa, Alhaji Abukari Mahama selected by the royal custodians of Dagbon to be enskinned as the new Yaa-Naa.