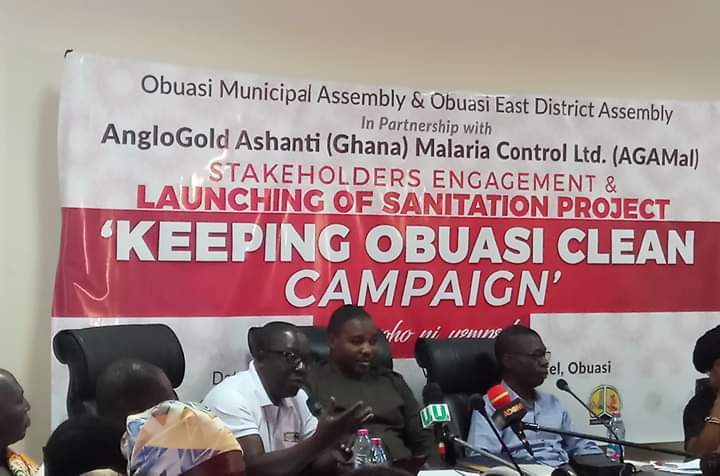 The project dubbed “Di wo ho ni, yempe fi”  forms part of measures by the three (3) institutions to deal with the sanitation measures in the two districts.

Addressing stakeholders at the launching ceremony, the Municipal Chief Executive for Obuasi, Mr. Elijah Adansi-Bonah bemoaned the poor state of sanitation in Obuasi and the country at large.

He said “Ghana currently losses more than $300 million dollars every year as a result of poor sanitation. This huge amount could have been used to bridge the development gap in the country”.

He told the stakeholders in a roundtable meeting that the setting up of the Sanitation Ministry, the formation of Sanitation taskforce and the launch of the National Sanitation Day Campaign in November 2017 gives credence to the President’s commitment to nip the issue of poor sanitation in the bud. 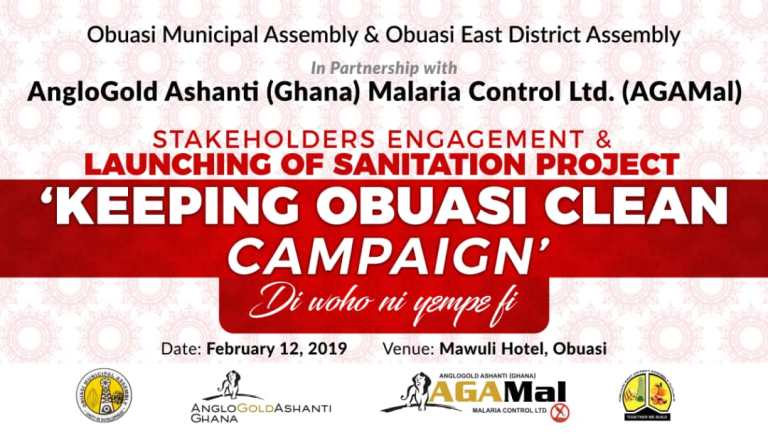 Mr. Elijah Adansi-Bonah further made an appeal to the people of Obuasi to eschew partisanship in their quest to fight sanitation.

He said the issue of poor sanitation affects all irrespective of your political, ethnic and religious affinity.

He made a heartfelt request to stakeholders which were made up of Nananom, the Clergy, Owners and Managers of businesses, Heads of department and Institutions in Obuasi to support the ‘keeping Obuasi Clean’ Campaign with finances and materials needed to make it a success.

The Managing Director of AGAMAL, Mr. Samuel Asiedu in his speech said the purpose of the program is to create the opportunity for stakeholders to come together to fight against poor sanitation in  Obuasi which poses a threat to human life.

Again, he said the ‘Keeping Obuasi Clean’ campaign is geared towards keeping Obuasi clean, healthy and a model town in terms of cleanliness.

The M.D of Malaria Control said the success of the programme hinges on “a monthly clean-up exercise,  provision of waste bins at vantage places, sanitation education in schools and formation of sanitation clubs.”

The rest are “community education aimed at behavioural change, daily cleaning, waste collection and supervision and community monitoring and watchdog of waste management.”

He praised the Obuasi Municipal Assembly for supporting the launch of the programme financially and appealed to stakeholders especially the business community to support the campaign with waste bins and other financial support to make the exercise a success.