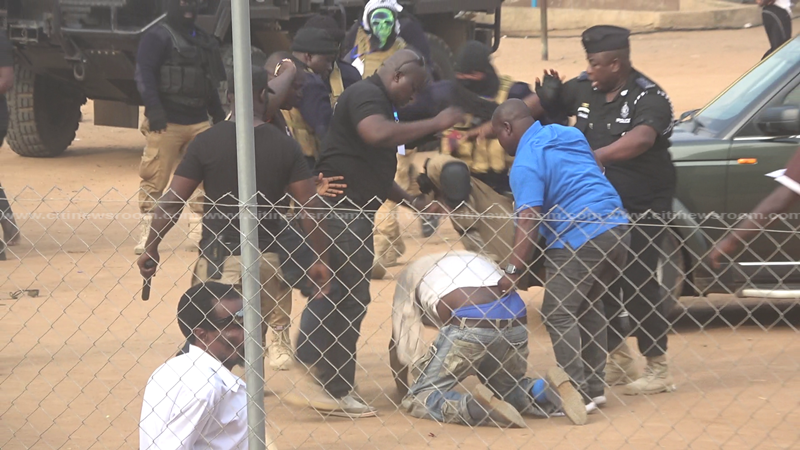 File photo: Security personnel beating a man during the by-election

The Ghana Academy of Muslim professionals [GAMP] has also joined other civil society organizations in condemning the violence that was witnessed during the recently held Ayawaso West Wuogon by-elections.

According to the religious organization, the violence witnessed during the by-election must be condemned as it has the potential to further discredit the gains of the country’s democratic credentials.

GAMP, in a statement signed by its General Secretary, Abdul-Wahab Abubakar also welcomed the Government’s decision to create a commission of enquiry to look into the violence at Ayawaso West Wuogon.

The Muslim professionals also urged the commission of enquiry led by Justice Emile Short to be impartial in the discharge of its duties in unravelling the truth behind the violence.

Below is the full statement by GAMP

The Ghana Academy of Muslim Professionals has noted with grave concern the violence witnessed in the recent by-election held at Ayawaso West Wuogon on January 31, 2019.

As a concern religious body interested in peace and development in the country, the GAMP deems it appropriate to add its voice to the numerous voices of individuals and Civil Society Organization to condemn in no uncertain terms the violence meted out on innocent citizens.

Ghana had over the years gained international recognition on account of her democratic credentials, and we as a nation must not engage in any activity that could undermine this enviable recognition.

The GAMP is happy that a Commission of inquiry has been set up to investigate this unfortunate incident. We are hopeful that the Commission will be impartial in discharging its duties and would ensure that the outcome of the enquiry puts an end to vigilantism in the country.

Bawumia swears in commission of inquiry

Acting President, Dr. Mahamadu Bawumia on Friday, 8th February swore in the commission of inquiry tasked to look into the Ayawaso West Wuogon by election disturbances.

He assured the commission of inquiry set up to look into the violence recorded last week at the by-election held in the Ayawaso West Wuogon constituency of government’s continuous support in unraveling the truth behind the disturbances.

According to Dr. Bawumia, government remains resolute in assisting the commission to work fairly adding that all logistics and resources needed by the commission, will be provided by Government.

Speaking at the swearing-in of members of the commission, Dr. Bawumia, tasked Justice Emile Short and his team to go on their duties without fear and favour.

Dr. Mahamadu Bawumia subsequently congratulated the members of the commission and thanked them on behalf of the government for accepting to serve the nation.

“As you are all aware the President of the Republic, Nana Addo Dankwa Akufo-Addo decided that in the interest of the public, this commission of inquiry into the incidents that occurred during the Ayawaso West Wuogon by-election be stepped up so that they would undertake a full…and impartial inquiry into those circumstances. Of course in doing this, the President had to look for people of impeccable integrity. I don’t think anyone can question the integrity of the people who are here constituting the commission.”