Nana Addo is the ‘father of militant vigilantism’ in Ghana – Mahama 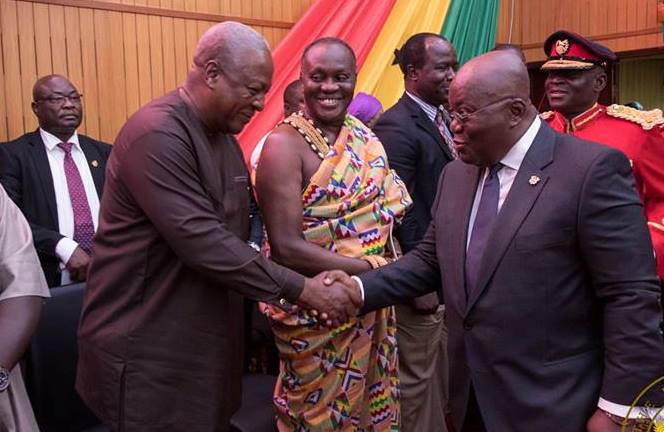 Former President John Mahama has branded president Nana Akufo-Addo as the “father of militant vigilantism” whose actions have left the country in a state of insecurity.

He said President Akufo-Addo, while a candidate for the New Patriotic Party (NPP) in 2012 introduced the phenomenon of militant vigilantism by encouraging the youth in his party to be armed and aggressive to ensure that the NPP wins power at all cost.

John Mahama, said political parties have over the years used unarmed and untrained well-built men to offer security services during electioneering periods, but these persons have arrested anytime they commit an offence.

However, the Akufo-Addo government has ensured that such persons are armed and have also been incorporated into the country’s security agencies.

“Parties have always had arrangements to provide security for themselves in times of electioneering campaigns. Such people were not trained, all it took was for them to go to the gym [and] to intimidate people. But they were not armed, they were not trained and sometimes when their actions went out of hands, the police rounded them up and locked them up.”

“Everybody knew that the police were in charge of security ultimately. But the phenomena of militant vigilantism is a creation of the Akufo-Addo government. [It started] Not only in his government, [it started] even when he was a [[presidential] candidate. They started all this ‘all die be die’, ‘if we don’t win Afghanistan’ and all those kind of very threatening [words],” he said.

John Mahama who was speaking on Radio Gold on Friday morning said the NPP government and Akufo-Addo before winning power decided to arm vigilantes as far back as 2012 when they brought in the country some three South African mercenaries to train members of its vigilante groups, Delta Forces and Invincible Forces.

“They urged their youth to be militant and that they must win the election at all cost. They started all that in 2012. When we were in office, we deported three South African mercenaries. They were brought in here to train the Invisible Forces and the Delta Forces. So really, Akufo-Addo is the father of militant vigilantism,” Mahama said.

Reacting to President Akufo-Addo’s call during the delivery of the 2019 State of the Nation Address to the NDC and the NPP to meet to discuss the disbandment of their vigilante groups, he said Akufo-Addo’s proposal was too simplistic and will not wholly address the problem.

“The structure of what he is trying to do doing is not right because the two parties alone cannot deal with this issue because the state has become a part of it. The vigilantes they trained have been absorbed into the security services so now they are embedded in the security services and so if you say the parties should disband vigilantes, it must involve other stakeholders … It will take other stakeholders like the Peace Council to disband this. NPP and NDC alone can’t dissolve it. We should find a way of delisting them from the National Security,” he said.

Christian Atsu ready to make a difference in society

Christian Atsu ready to make a difference in society