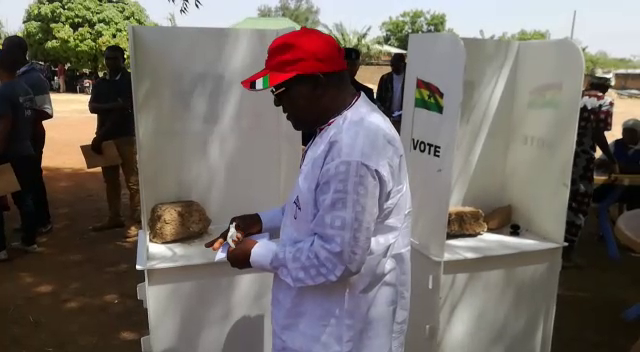 Alban Bagbin has pulled a surprise victory over former president John Mahama in the party’s ongoing presidential primaries in the Nadowli/Kaleo constituency.

Results from the various constituencies where voting have ended show that former president Mahama is in a comfortable led, winning with huge margins in every constituency except for Nadowli/Kaleo where aspirant Alban Bagbin is Member of Parliament.

Alban Bagbin had earlier in the day said that persons who are ruling him out of the party’s presidential primaries are “wishful thinkers” and should be ready to be surprised at the end of the polls on Saturday.

Reacting to reports that the Member of Parliament for Odododiodoo, Nii Lantey Vanderpuye, a known supporter of John Mahama had ruled him and other candidates out, Alban Bagbin said Mr. Vanderpuye is only a wishful thinker who is full of “sound and fury.”

The second Deputy Speaker of Parliament after casting his vote at Nadowli in the Upper West Region said: “at the end of the day we will see whether his wishful thinking will come to pass.”

“Even though he [Nii Lante Vanderpuye] is a Member of Parliament, he does not know what democracy means; and so he is fond of using words to show that he is rather full of sound and fury and not reason,” he said.