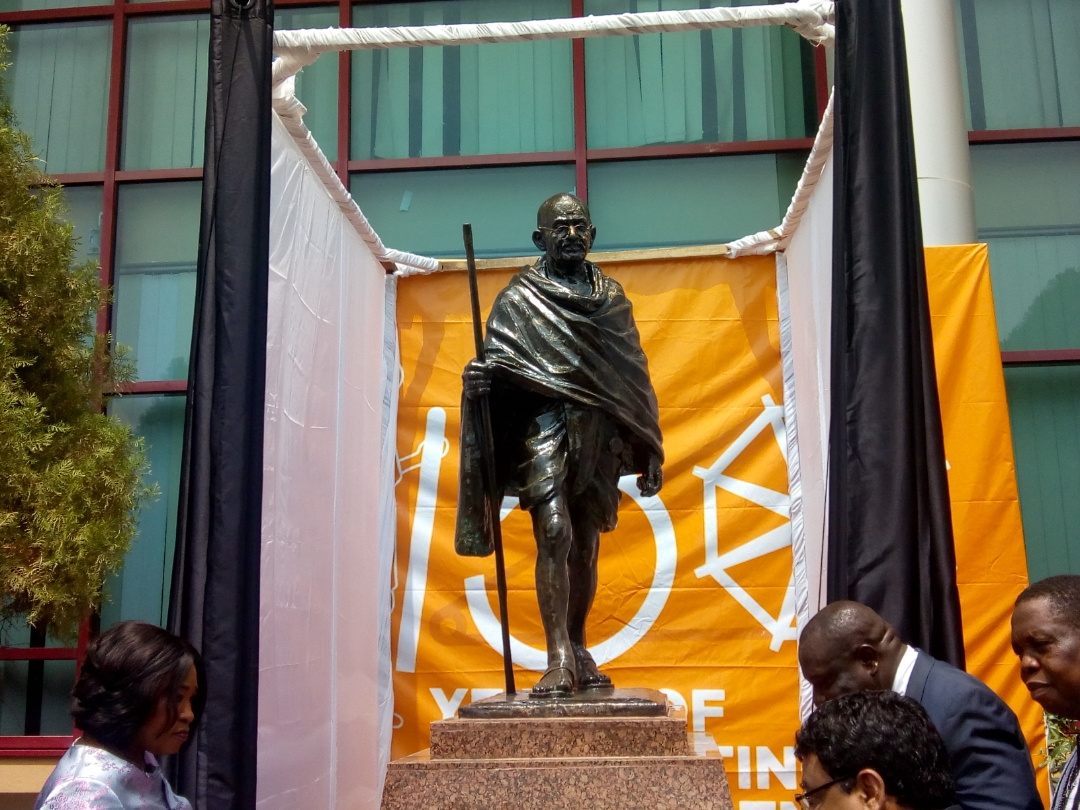 The India High commissioner to Ghana, H.E Singh Yadav says the relocation of Mahatma Gandhi’s statue marks an end to misconceived perception about the legacy of the Indian freedom fighter.

According to him, Gandhi’s ideas influenced several freedom fighters across the world in attaining their goals.

[contextly_sidebar id=”WYBoPpMT0KyeFNlkCE0SRhUf0anHLY4x”]The controversial Mahatma Gandhi’s statue, which was forced off the University of Ghana campus after debate and protest, has now been relocated to Kofi Annan Centre of Excellence in ICT.

Speaking at a ceremony to unveil Gandhi’s relocated statue, H.E Singh Yadav further indicated that Gandhi’s ideas had been the basis of some recent solutions to problems facing the world.

“We are confident that the relocation of the statue to a prestigious location in Ghana will bring an end to what was a misguided campaign about certain writings of Mahatma Gandhi. The contribution of Mahatma Gandhi to India’s freedom which subsequently inspired numerous African countries to throw away the yoke colonialism is immeasurable.

“His path of truth and non-violence and his empathy for the oppressed and downtrodden, have since been emulated and admired by many great leaders of the world, especially in Africa, like Nelson Mandela, Dr. Kenneth Kaunda, Julius Nyerere, Kwame Nkrumah and may others. It is therefore important that during the 150th birth anniversary of Mahatma Gandhi, we see Mahatma Gandhi and his contribution in proper perspective”, he added.

Last December, the University of Ghana finally pulled down the statue of India’s independence leader, Mahatma Gandhi, erected at the University’s recreational quadrangle.

This was after some students and lecturers of the University had for over two years called for the removal of the statue because of his “racist identity”.

Lecturers of the university started soliciting signatures for a petition for its removal after it was unveiled in 2016 by India’s former President Pranab Mukherjee.

The petition held that the Gandhi statue was a racist symbol and that African heroes should be put first.

At the time, Ghana’s former High Commissioner to India and now Speaker of Parliament, Professor Mike Ocquaye, described demands for the removal of the statue as unnecessary.

He was concerned with the implications of the protests on diplomatic ties between Ghana and India.

“It will be most unnecessary, most uncalled for and not in the supreme interest of Ghanaians and we must know what serves our interest best. Some people in India wanted diplomatic relations to be broken in Ghana over the way we sometime back spited them, but caution prevailed and they kept their cool to show that they understand diplomacy and the ups and downs of international relations and today the relationship is a bit better and we look forward to it being better still.”

He also called for more tolerance of divergent views, saying that is the hallmark of academia.

Mahatma Gandhi is known for leading non-violent resistance to British colonial rule in India ahead of the country’s independence on August 15, 1947.

But before then, when he worked in South Africa, he is cited as having made racist comments about black Africans.

In his early writings, he referred to black South Africans with the racist slur “kaffirs”.