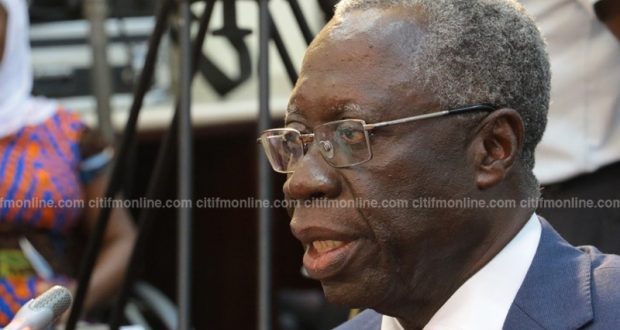 Mr. Mahama met some diplomats on Wednesday over the violent clashes that occurred during the Ayawaso West Wuogon by-election.

The NDC has said the violence on the day was state-sponsored and said there were fears of an escalation of such disturbances ahead of election 2020.

But Mr. Osafo Maafo insisted that Mr. Mahama’s actions were distasteful and uncalled for.

“To say the least, this is unpatriotic and shameful. It is because if he gathered Ghanaians, call it the academia or Ghanaian professionals or Ghanaian businessmen and he talked about matters of concern to him, I’ll have no problem. He’s a former head of state and then for a very important opinion leader but to gather foreigners and try to paint Ghana black is just not acceptable,” the Senior Minister condemned in a short video clip.

The Minister also questioned why Mr. Mahama was, in his view, trying to blow the confusion out of proportion.

“What is he really after? What does former President Mahama want to portray? Why does he want to paint Ghana black? When indeed there is nothing to paint black. There was some violence, it didn’t happen in a polling station, it happened as it were in the parliamentary candidate’s house away from any polling station and we’re yet to know who even shot. Why would you want this to look like a national disaster?”

“…if you look at what has happened in previous by-elections in this country, this is nothing more than what had happened earlier,” he added in reference to the confusion that had marred other by-elections in the past, like at Talensi.”

During the meeting, Mr. Mahama, however, tried to calm fears and assured that violence was not a feature of Ghana’s democracy.

“The violence took a different form. It was state-sponsored because those who were involved in these dastardly acts were brought there by the state. They were armed to the teeth; they discharged weapons and injured several people. Unfortunately, that is not part of Ghana’s democratic culture. It was a day of shame for Ghana because Ghana has always been seen as the model of democracy in Africa,”  Mahama added.