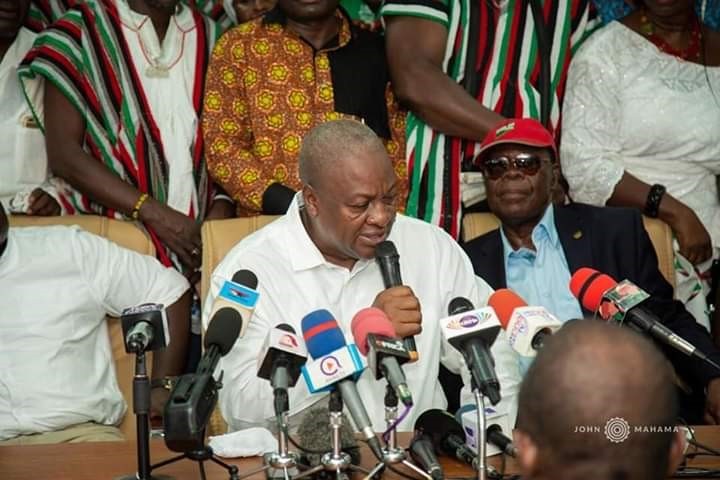 The National Democratic Congress is not worried about a potential leadership deficit in the party following John Mahama’s easy victory in the presidential primary, according to the party’s National Elections Committee Chairman, Kofi Attoh.

The former President secured 213,487 votes representing 95.23 percent of the total votes cast in a field of seven persons.

[contextly_sidebar id=”rrgDBZaevkrPd4Shh4OMH0wBB2aihqPE”]In the event Mr. Mahama won the 2020 election for his second term, the NDC will have to find another flagbearer but Mr. Attoh said: “anybody who is thinking about a successor to Mahama after 2024 is stretching himself a little too far.”

The concerns notwithstanding, he said there was a possibility of a successor quickly ascending to the top of the party in the manner of France’s President, Emmanuel Macron after John Mahama’s reign.

“There are about four million people who vote for NDC. Even the beautiful ones are not yet born. There are too many people in NDC to succeed John Mahama than we can think off.”

In the meantime, Mr. Attoh said the party is willing to stick with Mr. Mahama in hope of an election 2020 victory despite the poor performance in the 2016 election.

The NDC’s performance in 2016 prompted soul searching and a committee set up to make recommendations to the party on how to regroup ahead of the next elections.

“The thinking of our people at NDC is that we have tried him and we have seen what went wrong. We are ready to correct it.”

Though there were clear indications that most of the executives and legislators in the party were in favour of a Mahama presidency bid, Mr. Attoh insisted that delegates voted on their own accord.

Performance of other candidates

Goosie Tanoh, founder of the Reform Party, a breakaway from the NDC came fourth with 2,091 votes representing 0.93%.

The former Trades and Industry Minister in the Mahama government, Ekwow Spio Garbrah received 1,447 votes which represent 0.65% of the total votes.