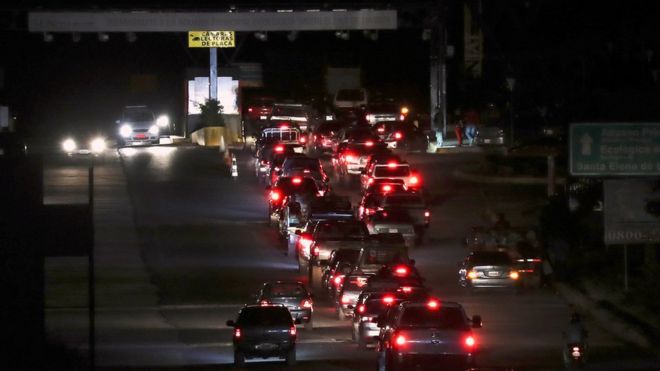 Venezuelan President Nicolás Maduro has announced he is closing the border with Brazil on Thursday night as a row over foreign humanitarian aid continues.

The embattled leftist leader went on TV to say that he was also considering shutting the border with Colombia to stop the opposition bringing in relief.

He denies any crisis and calls the aid delivery plans a US-orchestrated show.

Opposition leader Juan Guaidó is leading a convoy to the Colombian border from the capital Caracas.

Mr Guaidó declared himself interim leader during anti-government protests last month and is recognised by dozens of foreign states, including the US.

Scuffles broke out and tear gas was fired when the convoy of buses and cars was briefly stopped by security forces on a road near Mariara, west of Caracas, but they later moved on.

Meanwhile, after the closure of the border with Brazil was announced, many Venezuelans rushed across the frontier to the Brazilian city of Pacaraima to stock up on supplies, Brazilian news portal G1 reported.

Queues of cars and people continued late into the evening, witnesses said.

Mr Guaidó and his allies hope to collect food and medicine in defiance of President Maduro.

The Venezuelan military has so far managed to block shipments of US aid from coming across the border with Colombia.

Despite denying there is any humanitarian crisis, Mr Maduro announced this week that 300 tonnes of aid would be shipped to Venezuela from its ally Russia.