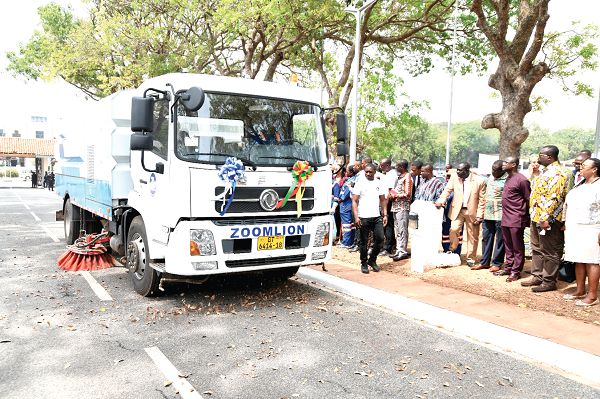 Zoomlion Ghana Limited, a waste management company, has taken its sanitation duties a notch higher with the launch of 10 mechanical street sweepers.

The vehicles are fitted with cylindrical (rolling) bristles that are used to collect sand, light refuse and other waste materials from streets, pavements and other hard surfaces.

They also have water storage and garbage compartments and tubes that connect the garbage tanks to the cylindrical bristles.

Besides, the lower parts of the trucks are fitted with side-spraying brackets and high pressure nozzles that help in the sweeping and gathering of refuse.

The vehicles, which were inaugurated in Accra yesterday, will be distributed to 10 regions in the country it was done in partnership with the Ministry of Water and Sanitation.

The Executive Chairman of the Jospong Group of Companies, the parent company of Zoomlion, Mr Joseph Siaw Agyepong, explained that the acquisition of the mechanical street sweepers was in response to the call by the President, Nana Addo Dankwa Akufo-Addo, on members of the Environmental Service Providers Association (ESPA) to come up with innovative ways to deal with the country’s growing sanitation challenges.

He said Zoomlion was also repositioning itself to form a stronger partnership with the government and other stakeholders to achieve the objective of making Accra the cleanest city in Africa.

“As part of that agenda, we have started an initiative to distribute one million waste bins to metropolitan, municipal and district assemblies (MMDAs) across the country. So far, 100,000 of the bins are ready for distribution,” Mr Agyepong said.

He further announced that the company would soon inaugurate a new compost plant in Accra following the completion of 80 per cent work on the plant.

In a speech delivered on her behalf, the Minister of Sanitation and Water Resources, Ms Cecilia Abena Dapaah, said the launch of the street sweepers was timely and called for proper arrangements to be made to ensure the sustenance of the facilities.

That, she said, required transparency in documentation and partnership arrangements between the company and other key stakeholders and the provision of adequate budgetary allocation to support the maintenance of the vehicles.

The Greater Accra Regional Minister, Mr Ishmael Ashitey, lauded Zoomlion for the initiative and said the launch of the vehicles should be a turning point in a clean Ghana campaign.

He urged MMDAs to support the company in its effort to rid the country of filth.

For his part, the Chief Executive of the Accra Metropolitan Assembly (AMA), Mr Mohammed Nii Adjei Sowah, said the MMDAs were collaborating to fight waste through the ‘Assemblies without Borders’ concept, an initiative to holistically manage waste across the jurisdictions of the assemblies.

According to him, 35 out of the 40 illegal dump sites in Accra had been cleared, while efforts were being made to get rid of the remaining five.