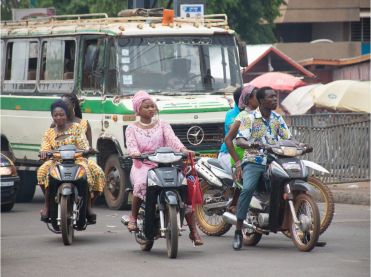 The Transport Minister has asked the Inspector General of Police (IGP) to arrest persons who use motorcycles, popularly called Okada after 9:30 pm.

This, according to the Minister will help reduce crimes as well as deaths related to motorcycle accidents in the country.

Statistics from the Police Motor Traffic and Transport Department show that 200 motorcyclists lost their lives in 2010.

Deputy Transport Minister, Titus Glover said a nationwide ban on the use of motorcycles in the night will help reduce crime in the country.

“Any motorcycle that we see around that time till the next morning should be arrested. Some education can be done before the directive is implemented,” the Minister said.

On the use of motorbikes for commercial purposes, Section 128 (1) of the Road Traffic Regulations, 2012 (Legislative Instrument 2180), states: “The licensing authority shall not register a motorcycle to carry a fare-paying passenger.”

There has been an increase in Okada operations in the country, particularly in the Greater Accra Region, following failure by the police to enforce the law.

The government recently indicated that it is reviewing the law banning the commercial operation of motorbikes to determine whether to amend the law to regularize its operations or maintain its current form and punish offenders.

Mr. Asiamah said the government is reviewing the Road Traffic Regulation, 2012 because its non-enforcement has increased Okada operations in the country.