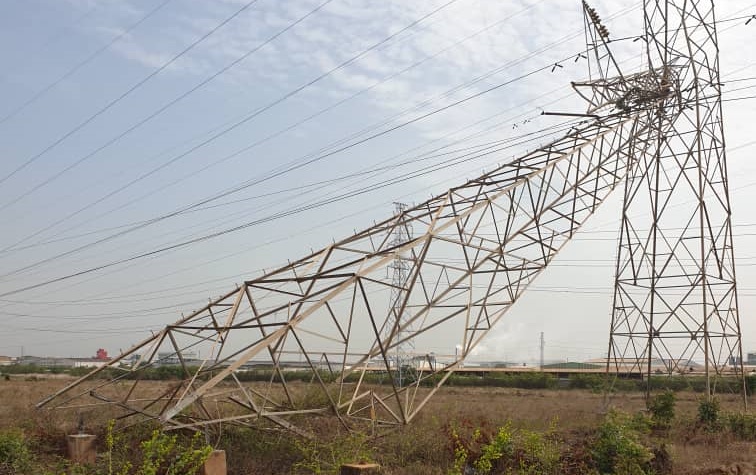 Energy Minister John Peter Amewu says he is not ruling out political sabotage in the apparent vandalism of a Ghana Grid Company (GRIDCo) high voltage transmission tower at Tema.

One of the 161,000 towers located in GRIDCo’s enclave near the free zone area in Tema, fell over into another tower after evidence that bolts had been deliberately cut and removed.

The incident led to power cuts in parts of Tema, Accra and all the way to Kumasi.

Speaking to the media after a tour of the site, Mr. Amewu warned that such acts will not be condoned.

“It baffles my mind how human beings can do this to our motherland and any political party that will have some element of association with such activity is not worth being in our country.”

The Minister also revealed that there may have also been plans to sabotage many other towers.

“We have already detected that all the towers along this line have chemicals being placed around them. What would merit somebody to do this?”

In view of this, Mr. Amewu also announced the setting up of a committee to probe the incident.

“I can assure [you] we have pulled in intelligence. There is a committee in place to start immediate investigations and these perpetrators will be brought back and we will make sure we will deal with them by the law.”

No disruption of power supply

Power transmission company, GRIDCo has assured that Monday’s hacking of its transmission tower will not have a toll on power distribution to any part of the country.

The company believes it will take at least 14 days to fix the problem.

“It will take us about two weeks minimum [to raise the mast again] We are reorganizing operations so that it doesn’t affect power supply. This has brought a new situation; we have brought in the police and the CID and the security apparatus and obviously has to be done collectively as a nation because this is a national asset which serves every part of the country and so we need to make it our responsibility,” GRIDCo’s Director of Systems Operations, Mark Baah said to Citi News.