The Ministry of Interior has renewed its October 2018 curfew hours imposed on some communities in the Bono region following a shooting incident that took two lives and injured several others.

The renewed curfew now takes effect from today, Thursday March 21, 2019 from 6pm to 6am.

The latest statement signed by Interior Minister, Ambrose Derry said there is “a total ban on all residents in the aforementioned communities and their environs from carrying arms, ammunition or any offensive weapons,” warning that “persons found culpable will be arrested and prosecuted”.

The statement further expressed government’s appreciation to chiefs, opinion leaders, and others for their efforts in the ensuring peace and urged them to use established conflict resolution mechanisms.

“Government continues to express its appreciation to the Chiefs, Elders, Opinion Leaders, Youth and the people of the areas for their efforts in ensuring peace in the area and urges them to use the established mechanisms for the resolution of their conflicts and disputes,” the statement added. 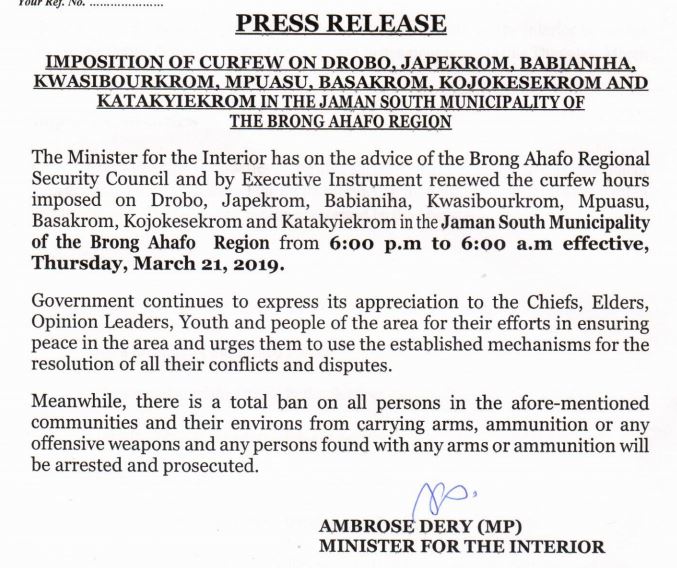 Some unknown assailants fired gunshots into a thick crowd of Japekrom inhabitants at Drobo.

Two persons were confirmed dead, while 14 others were in critical condition over the incident.

The 14 people were admitted at the Sampa Government Hospital to receive treatment.

At the time, Public Relations Officer of the Brong Ahafo Regional Police Command, Chief Inspector Augustine Kingsley Oppong,  said security had been beefed up in the rival towns of Japekrom and Drobo to prevent any reprisal attack.

“Stray bullets started coming in from different angles and 15 people were injured through that. They were immediately rushed to Sampa hospital where one was pronounced dead. During the patrols with the military in town, we also spotted a certain taxi in front of the district assembly and found somebody also suspected to have died. Immediately we sent the body and he was pronounced dead at the Drobo hospital.”

Some reports say in the year 2000, the relationship between the two towns grew sour following a Sunyani High Court ruling in a land dispute.

The court ruled that the matter should be referred to the Stool Lands Boundary Demarcation Committee, which is the body empowered with jurisdiction over the matter.

The chief and people of Japekrom supposedly regarded the High Court’s decision as a victory and jubilated in the town, a situation which nearly led to a clash between the two towns just after the ruling.

It was however unclear whether the attack is linked to that rivalry.

‘Give me new lawyer from ICC, mine is fed up’ – JB’s suspected killer

'Give me new lawyer from ICC, mine is fed up' - JB's suspected killer