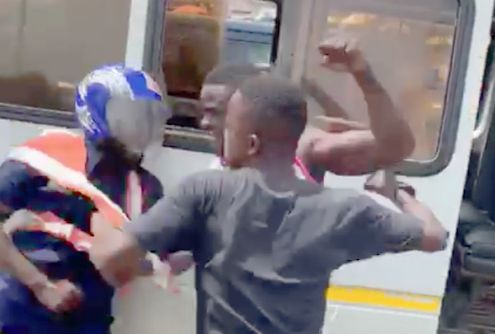 The commercial bus driver and his mate who were seen in a video physically assaulting a police officer have been transferred from the Odorkor Police station to the headquarters of the Bureau of National Investigations (BNI).

Until today [Friday], no one knew where they were because the police declined to tell human rights activists and interest groups where the suspects were being held.

COPEC, GPRTU, HRAC, Amnesty International and human right lawyers Francis Xavier Sosu and Martin Kpebu had all tried to have access to the driver and his conductor but to no avail.

Citi News‘ Anas Seidu said although it was not a regular practice for a suspect in such a case to be transferred to the BNI headquarters, the CID boss, DCOP Maame Tiwah Addo Danquah explained that the decision was taken because there was a possibility that the transport operators would besiege the police station.

She added that because the alleged assault was against a police officer, it was unsafe for the suspects to be kept in the custody of the local police.

She said “today they [interest groups] returned to the CID to look for the suspects but they were given a letter to go to the BNI Headquarters to access the suspects so since morning, they have been at the BNI headquarters to see them.”

Citi News gathered that the CID had listed specific individuals who could be allowed to visit the suspects.

Officials of the BNI also insisted that the selected individuals will not be allowed to see the suspects at the BNI Headquarters but rather a yet-to-be-named location would be decided on, where the various interested persons would have the opportunity to see the suspects, in the company of the CID.