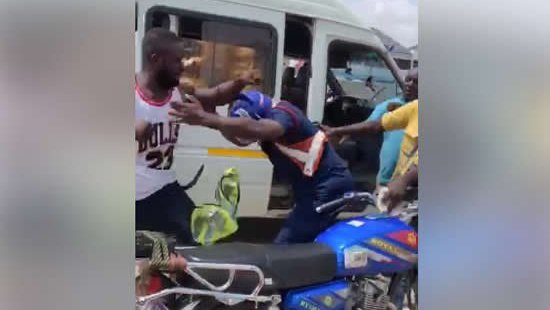 A bus driver and his conductor who were filmed assaulting a police officer have been remanded and are scheduled to appear in court on April 1.

In a video circulating on social media, the pair were seen shedding tears and complaining about how they initially been assaulted by the police officer they attacked.

“What crime have I committed? Look at my nose. He [the Police officer] hurt me,” the driver said to the person filming him.

It is believed that the suspects pleaded not guilty to assaulting a police officer.

The two have also been charged with conspiracy to commit a crime and causing unlawful damage.

Several Ghanaians on social media have condemned the actions of the accused with most saying it was wrong for civilians to attack police officers.

Several other Ghanaians have also criticized the Ghana Police Service for their fast-tracking of the prosecution of the driver and his mate who attacked one of their own while policemen who have assaulted citizens are still at post.

DSP Effia Tenge explained that the incident occurred when the driver was stopped by the officer after he disobeyed road traffic laws.

Citi News sources say the incident happened on Thursday, March 14, when the driver stopped in the middle of the road at Weija for some passengers which led to a build-up of traffic and a minor accident involving a motorbike.

According to DSP Effia Tenge, “the police is appalled by the kind of growing lawlessness especially by drivers and motorists on the routes of Accra and to a larger extent the entire country.”

“The police administration and the regional command will like to state that this kind of growing lawlessness will not be countenanced and these people will be made to face the full rigours of the law.”