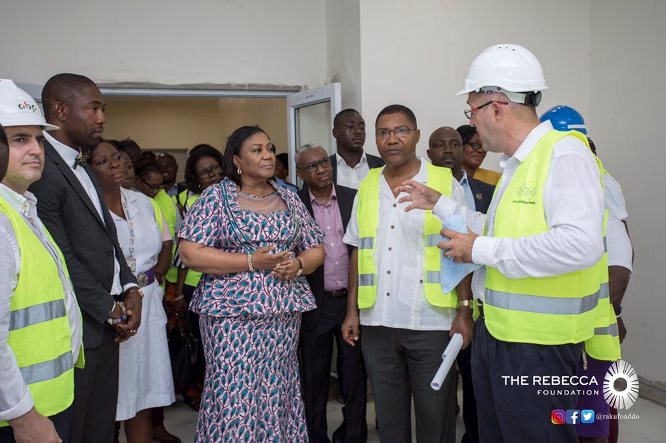 First Lady, Rebecca Akufo-Addo has inspected the progress of work of the new Paediatric Intensive Care Unit at the Korle-Bu Teaching Hospital (KBTH) in Accra, expressing satisfaction with the work, which is expected to be finalised by the end of March 2019.

The new Paediatric Unit will serve as a one-stop-shop, health care unit, containing laboratory centre, a pharmacy, a neonatal intensive care units (NICU), a Paediatric Intensive Care Unit (PICU) a counselling Unit, a bank, among others, with the aim to save the lives of children and babies from unwanted deaths.

[contextly_sidebar id=”LE3FP6lPg8kZKOsETZbwwKoC5eEUQzfO”]The current old Children’s Unit that is almost incapacitated, lacking many essential provisions and tools, is said to be recording many child deaths, which could have been prevented easily.

For instance, authorities told the journalists who accompanied the First Lady to inspect the new facility on Thursday that, four children had died at the Emergency Centre the previous night, with one other child dying at the NICU.

Statistics made available to the media also indicated that from 2013 to 2018, a total number of 5,555 children had died at the children’s Unit.

The First Lady who was visibly impressed with the progress of work, commended the contractor, Africa Building Partners (abp), for satisfactory work done, saying, “I can’t wait to commission it soon”.

She later visited the Emergency Unit of the Child Health Unit to fraternise with the children and their caregivers there.

The PICU project, which is being facilitated by The Rebecca Foundation, is expected to ease the pressure at the old Children’s Unit and complement the provision of quality healthcare at the Korle-Bu Teaching Hospital.

In line with scheduled timelines, it is expected to subsequently be furnished with the state-of-the-art equipment.

Mrs Akufo-Addo, cut the sod for the construction of the Unit in June 2018.

The facility is said to be needed urgently, to help provide emergency services and save the lives of children that are referred to the Paediatric and Neonates Unit at the Department of Child Health at the Hospital.

It is said to be a modern fully equipped PICU for the Children’s Block, which would take care of children that are admitted through the emergency ward and are either Intensive Care or high dependency patients.

The KBTH, the leading national referral centre in Ghana, receives patients including children, from all the regions of the country and from other West African countries like Togo, Benin, Cote d’Ivoire, Burkina Faso, Sierra Leone and The Gambia.

The Children’s Block at Korle-Bu has, for many years, been working under some tough conditions with deplorable facilities, extreme congestion and lack of adequate equipment making treatment extremely difficult, hence, the urgent need of a facelift to provide optimum care for children.