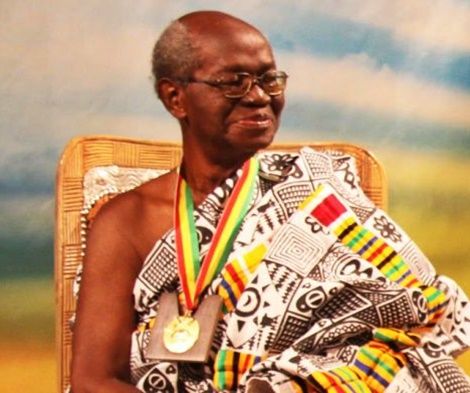 Reports indicate that he died at the Legon Hospital on Wednesday morning after a short illness.

Born on June 22, 1921, at Mampong Asante, the composer and writer is known for some of his popular choral works which include Adanse Kronkron, Morbid Asem, Monna N’Ase and Monkafo No.

He has also written extensively for Western orchestral instruments, like the flute, violin, cello, percussion and piano.

But it is through Nketia’s pace-setting works for traditional African instruments that his genius is acclaimed.

He is the Chancellor, Akrofi-Christallor Institute of Theology, Mission and Culture, Akropong-Akuapem, a Foundation Fellow of the Ghana Academy of Arts & Sciences, Honorary Fellow of the Royal Anthropological Society of Great Britain, and Ireland, Honorary Member of the International Music Council (IMC-UNESCO), Honorary Fellow Of the Pennsylvania Chapter of Phi Beta Kappa, Honorary Member of the Pan-African Writers Association (PAWA), Member of the International Jury for the Proclamation by UNESCO of Masterpieces of Oral and Intangible Heritage of Humanity, and Board Member of the National Commission on Culture, Republic of Ghana.

His numerous Awards include Cowell Award of the African Music Society, Companion of the Order of Star of Ghana, Grand Medal of the Government of Ghana (Civil Division), Ghana Book Award, ECRAG Special Honour Award (1987), Ghana Gospel Music Special Award (2003), ACRAG Flagstar Award (1993), ASCAP Deems Taylor Award for his book on the Music of Africa, IMC-UNESCO Music Prize for Distinguished Service to Music, Prince Claus 1997 Award for Distinguished Service to Culture & Development, the Year 2000 Distinguished Africanist Award of the African Studies Association of the USA for Life-long Devotion to African Studies, and DLitt(Honoris Causa) of the University of Ghana.

We have enough power for distribution - PDS assures

We have enough power for distribution - PDS assures