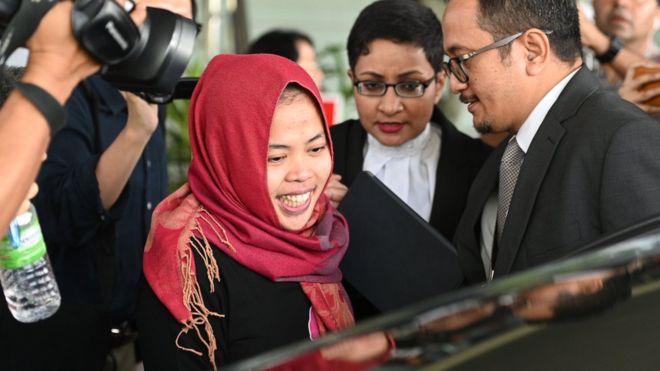 The Indonesian woman accused of killing Kim Jong-nam, half-brother of North Korea’s Kim Jong-un, has been freed after charges against her were dropped.

Siti Aisyah had been accused of smearing VX nerve agent on Mr Kim’s face in Kuala Lumpur airport in 2017.

She and her co-accused, Vietnamese Doan Thi Huong, deny murder and say they thought they were part of a TV prank.

After several months delay, the defence phase of the trial was set to begin Monday, with testimony from Ms Huong.

However, the prosecutor in the case requested the murder charge for Siti Aisyah be dropped, without giving a reason.

In a letter to the Indonesian law minister though, Malaysia’s attorney general explained the decision was taking into account considerations Jakarta raised about the case as well as the good relations between the two countries.

The judge approved the request, saying “Siti Aisyah is freed”, according to AFP news agency. However, this does not amount to an acquittal.

Ms Aisyah could have faced the death penalty if convicted.

“I feel happy. I did not know this will happen. I did not expect it,” AFP cites Ms Aisyah saying as she left the court.

BBC correspondent Jonathan Head, who is at the court in Kuala Lumpur, says there appears to have been less evidence against her than against her Vietnamese co-defendant.

Ms Huong had initially been expected to read a statement in court, which would have been the first time either of the two gave testimony. However, her case has now been adjourned at the request of her lawyers.

How did the murder happen?

Kim Jong-nam, the estranged half-brother of North Korea’s leader, had been waiting to board a flight from Kuala Lumpur to Macau on 13 February 2017 when two women approached him in the departure area.

CCTV footage showed one of them placing her hands over his face, then both women leaving the scene.

Mr Kim died on the way to hospital from what was later found to be exposure to the nerve agent VX, one of the most toxic of all known chemical agents.

North Korea has fiercely denied any involvement in the killing, but four men – believed to be North Koreans who fled Malaysia on the day of the murder – have also been charged in the case.

They remain at large despite an Interpol “red notice”, equivalent to an international arrest warrant.