Namibia @ 29: Remembering the land of the brave [Article] 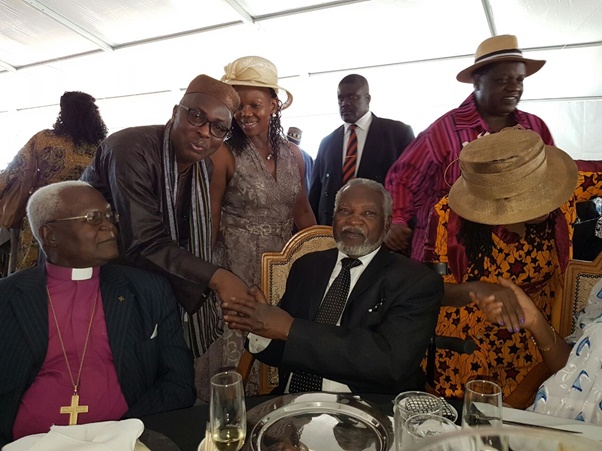 Posing with the Founder, H.E. Sam Nujoma on his 87th birthday

Though separated by many independence years, Ghana, 62 and Namibia, 29, share a common independence birth month: March.

Our Founder, Osagyefo Dr. Kwame Nkrumah declaring our Independence on March 6 1957, said it was meaningless unless it was linked to the total liberation of the African continent. Namibia’s first President, Dr. Samuel Shafiishuna Daniel Nujoma, affectionately called the Founder, by a grateful nation, declared independence for his country on March 21 1990.

It was the last remaining African country to gain independence until South Sudan took over that accolade when it broke off from Sudan in July 2011 fulfilling the Osagyefo’s independence pledge.

The history, geography, politics and economy of Namibia are out there to be googled by anyone so interested. This tribute, therefore, is not going that way but a narration of my love at first sight and how it’s become a long-lasting affaire…

I arrived in Windhoek on a cold July 2014 morning. Though I had been warned to expect very low temperatures, it being winter in southern Africa, I had completely underrated the warning and so was hit hard in the face by a chill that nearly flew me back to Accra! There was no frost but the dry cold I felt was more biting than many of the winters I had experienced before in freezing Europe. This was Africa and yet the thermometer was telling me a different story.

The welcoming party from the Ghana High Commission and Namibian Protocol, with diplomatic efficiency, whisked me through the airport formalities and in no time, I was on my way to take up residence on 91 Kwame Nkrumah Avenue, to represent the interests of my country and the voice of my Head of State.

As we headed towards the city – the airport being some 40 or so kilometers away – the Head of Chancery used the opportunity to start her briefing: The presentation of Letters of Commission/Credentials, the meeting with the Chief of Protocol, then the Minister of Foreign Affairs and other “Courtesies” after the presentation, which was only three days away.

It all seemed so unreal. A few hours earlier, I had been in Accra, another ordinary Ghanaian citizen and here I was, now representing the honour and dignity of my country, and being accorded all the privileges and honour for representing my country and President.

I squirmed inwardly, not finding the words to exactly describe my emotions – fright and pride jostling for supremacy within me all the while. But the vast expanses of hills and open fields soon engaged my interest and I spent much of the drive enjoying the un-spoilt landscape of the outskirts of Windhoek.

My first impression of the Namibian capital, Windhoek (pronounced “Vindook”) and people was a most reassuring one. In all my African travels, I had never encountered men, not women, who looked so Ghanaian, in terms of facial and physical attributes. When later I got the opportunity to say a few words to my Namibian hosts, I made that observation to their amusement and indeed appreciation too.

Very few people know that there are strict rules to the conduct of diplomatic representation, which have to be observed to the letter – in short, Protocol.

I remember when President Mahama’s nominations were made public and my name was included in the list, many people kept asking me when I would be leaving. Very little is known of the Vienna Conventions, the international agreements regulating diplomatic relations among states parties.

From the time of a government’s nomination of an envoy, to the time that envoy assumes office it can take anything from two to twelve months! I had to wait for about three months for my clearance to take up residence in Windhoek.

My presentation of the Letters of Commission was preceded by meetings with the Namibian Chief of Protocol, and the Minister of Foreign Affairs followed by rehearsals for the presentation. Before the presentation, one is not “recognized”. You cannot drive about with your country’s flag on the car, and neither can you attend official functions. The meeting with the Foreign Minister is meant to lighten some of these restrictions with the presentation of your “Open Letters”. With that you can be reporting to your own Mission and work in the office, but nothing more; and that is why an early presentation is most desirable. Propitiously for me, I arrived on the 20th of July and on the 23rd, the presentation ceremony took place.

State ceremonies are often very solemn and dignified affairs and none more so than the Presentation of Credentials or Commissions. One may note the slight difference between the two here: An envoy from a Commonwealth country accredited to another Commonwealth country is a High Commissioner and presents Letters of Commission, whereas the rest are Ambassadors and present Letters of Credentials. I, therefore, went with my Letters of Commission, duly signed by President John Dramani Mahama and presented them to his Namibian counterpart, President Hifikepunye Pohamba. Another important document is the Letter of Recall, which officially terminates the tour of a predecessor – in my case, H.E. Major General S.A. Odotei.

Six other envoys were presenting their letters that day, but it fell on me, the novice, to present my letters first and also respond to the President’s remarks/toast – again, another manifestation of the rules… Because I was resident, I took precedence over the others, no matter how senior they were to me in diplomatic practice. They were all resident in Pretoria and had concurrent accreditation to Namibia

The presentation went very well, without any hitch but as I approached him with my Letter of Commission and my predecessor’s Letter of Recall, President Pohamba looked at me and said ‘Akwaaba’. I was so taken by surprise that my tongue could not come up with the correct Twi Akan response and all I could manage was ‘Medaase’!” I had earlier been driven to the presidential office complex without Ghana’s flag but after the ceremony, departed with our tricolour and black star fluttering proudly…

It may be an over-used cliché but its import never diminishes when it is sincere, and that’s how I can describe my first impression of Namibia – The Land of the Brave – as I settled into 91 Kwame Nkrumah Avenue…

I have travelled many African countries, in fact, all the sub-regions and their capitals, but it is Windhoek, capital of Namibia that I can describe as my very favourite African destination. Neat, disciplined, stickler to the rules, portable and laid back, the City of Windhoek is a gem in Africa. Until about two or so years ago, it had the enviable title of the neatest city in Africa. Kigali, Rwanda has recently edged to the top but they are fighting to regain their top position.

It is a very huge country, Ghana can fit inside her three times in terms of land mass, but in human population terms, the city of Accra alone far outnumbers the entire Namibia. A great cattle farming country, I used to joke with them that they have more cows than human beings, which is true and as you can imagine an equally great meat-eating country!

Even though Namibia is as thirsty a country as any in the world, the rules are fairly stringent and alcohol sale hours are regulated. A mark of the country’s social discipline. In every liquor shop clear signs are displayed about the times you can or cannot buy alcoholic beverages…

They do not go deliberately jumping red traffic lights or honking/tooting indiscriminately or parking wrongly or putting up buildings where they are not supposed to! Even the shanty towns around Katutura (Not exactly Nima but that’s the closest approximation), display some order! Namibians love to queue and would await their turn patiently for a service. How many times have I not seen senior cabinet ministers and other high-ranking public servants waiting their turns in long queues? Fascinating country. When I was there Namibia had some top Ghanaian professional in academia and other fields. The associate dean of the medical school was a Ghanaian; the dean of the law school was a Ghanaian and many others…

On her 29th birthday, I pay tribute to the Land of the Brave and now that Air Namibia has resumed flights to Accra, I hope Ghanaians would take advantage to visit this enchanting country to enjoy its people, flora, wild fauna and much, much, more – a great destination for leisure or business.