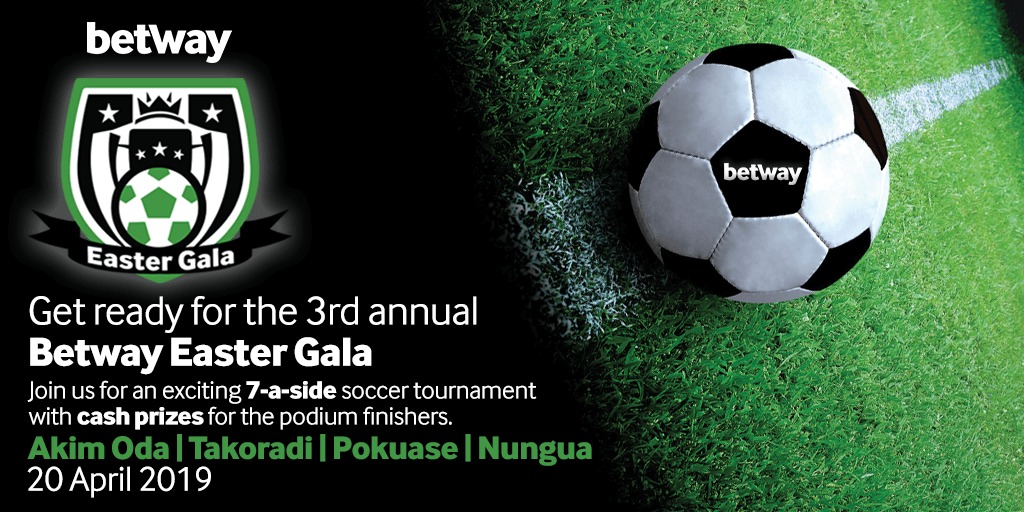 The 2019 Betway Easter Football Gala tournament is scheduled for 20 April 2019 and will simultaneously take place across four locations in the Greater Accra, Western and Eastern Regions.

The tournament will feature thirty-two (32) teams from Nunguaand Pokuase in the Greater Accra Region, Akim Oda in the Eastern Region and Takoradi in the Western Region.

Each region will field eight (8) community football teams. The teams will complete in several games over the one-day tournament with the top three placed teams in each region sharing a total prize purse of GHS 5,000. The champions of each region will walk away with GHS 2,500.

In addition to the action on the field, fans will be entertained off the field with table tennis, foosball and other exiting games.

“Since our inception, we have been committed to sports development in the country and that’s just what we are doing,” said Magnus Rex Danquah Jnr., Country Manager of BetwayGhana.

“We are looking forward to using this competition as a tool to bring people within our communities together during the festive season as well as to give them an opportunity to showcase their talent.”

The 2019 Easter Gala will be the third sponsored by Betway in their continued drive to support sports development in Ghana.

Last year’s edition witnessed an impressive showcase of talents from communities in Accra, Kumasi, Cape Coast, Takoradi, and Sunyani with the Vipers from Cape Coast emerging as the overall winners.